Armenia: Looking to Receive an Economic Boost from Iran 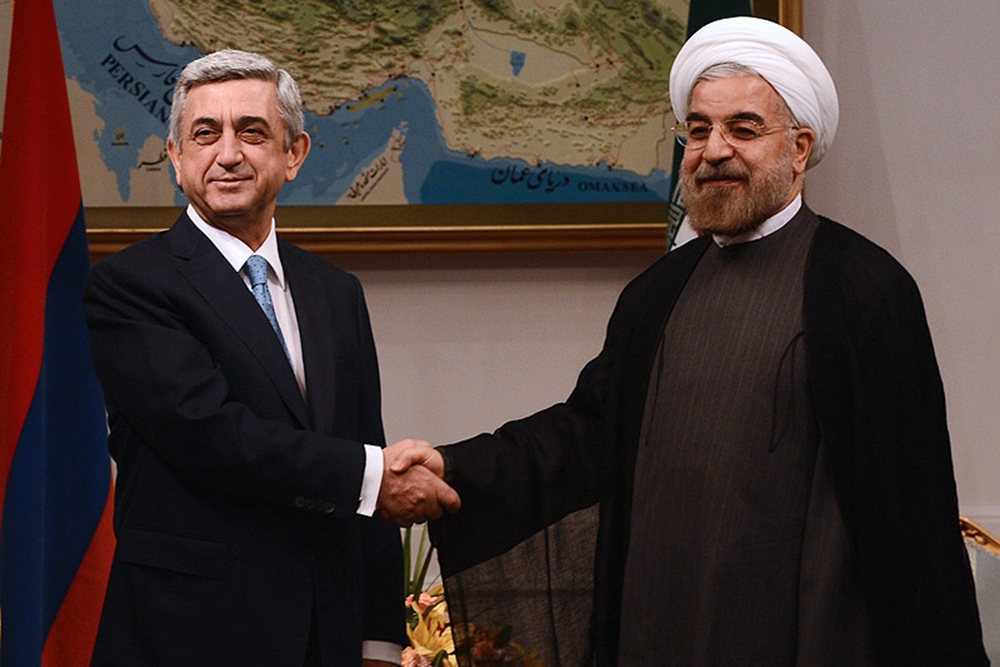 Armenian President Serzh Sargsyan (left) meets with Hassan Rouhani in Tehran in early August 2013 during the inauguration ceremony of the newly-elected Iranian president. The recent lifting of international sanctions against Iran may turn Armenia into a key trade conduit for its Middle Eastern neighbor. (Photo: Armenian Presidential Press Service)

Economic hopes are rising in Armenia that the country can serve as a trade conduit for Iran now that international sanctions against Tehran are being lifted.

Armenia has long-standing ties to Iran, and is a member of the Russia-led Eurasian Economic Union (EEU), a factor that potentially increases its attractiveness as a trade partner for Tehran. Yerevan is “an important avenue for both Iran to export through Armenia into that large combined market [EEU], and as a platform for Western engagement in the now opening Iranian market,” noted Richard Giragosian, director of the non-governmental Regional Studies Center in the Armenian capital, Yerevan.

The World Bank’s country director for Armenia, Laura Bailey, told RFE/RL’s Armenian service in January that stalled energy partnerships between Iran and Armenia could be the first sector to take off.

The gas deal appears to fit into a larger, regional scheme. In December, quadripartite talks took place during which Armenia, Iran, and the Black Sea countries of Georgia and Russia agreed to establish a coordinating group on establishing an energy corridor linking the four countries.

Negotiations already have occurred between Iran and the Georgian government about sending Iranian gas to Georgia via Armenia, Iranian state media reported Kameli, the Iranian gas official, as saying in early January.

Some Armenian experts are tempering their optimism with caution. Russian-owned companies control an estimated 80 percent of Armenia’s energy sector. Energy giant Gazprom runs the gas pipelines from Iran and on to Georgia, and it tends to look askance at competitors who might try to muscle in on their markets. At the same time, no clear sign has emerged that Moscow opposes an increase in Iranian gas exports to Armenia. The Sputnik news agency, a Kremlin mouthpiece, promptly reported Kameli’s announcement on February 7.

Iranian affairs specialist Armen Vardanian at Yerevan’s Armenian Institute of International and Security Affairs believes that “Russia will embrace the projects that will not contradict its national interests.”

“For example,” he continued, Gazprom, as the owner of the involved pipelines, “will benefit from the export of Iranian gas to Georgia and would not raise objections to it.”

Last month, Georgian Energy Minister Kakha Kaladze claimed that Russia had raised the prospect of ending its own gas exports to Armenia via Georgia, and instead having Iran provide the supplies.

Given Russia’s energy positions, Vardanian downplayed the possibility that Armenia could become a transit country for significant shipments of Iranian gas to Europe. “Russia would strongly oppose it,” he said. “Gas is the last weapon left in Russia’s political arsenal that is a means of putting pressure on some European countries, and the Kremlin will not want to lose it.”

Gazprom accounts for a majority of gas supplies to several European Union members.

The prospect of Iranian gas flooding the EU market, creating downward pressure on prices, is a major disincentive for Russia, added Giragosian. He also expressed caution when it comes to Iranian gas exports to Armenia, even via a Gazprom-run pipeline.

“There will be little incentive for allowing Armenia to escape the Russian orbit so easily. And given Armenia’s pronounced dependence on Russian gas imports, the potential of an expansion of Armenian-Iranian energy ties will be the first target of Russian pressure,” Giragosian said.

Despite these obstacles, Yerevan, he advised, should pursue a role “for engaging Iran.”

Success could provide a much-needed financial boost for landlocked Armenia, which is subject to an economic blockade by two (Azerbaijan and Turkey) of its four neighbors.

Officials and experts believe that hydropower is a sector with great potential for growth. According to an official report from Armenia’s Ministry of Energy and Natural Resources, a large-scale electricity exchange program between Armenia and Iran is planned to start in 2018. Power will also be exported north to Georgia.

The groundbreaking for a hydropower plant on the Aras River, which flows along the Iranian-Armenian border, took place in 2012, but the freezing of Iran’s international financial assets stopped further work.

Some officials have expressed hope for an expansion of transportation links. But so far, progress in this area has been slow. In late January, Armenia and Iran signed an agreement about a transportation corridor that would link Iran to Georgia. The Georgian government on February 8 announced plans to cancel visa requirements for Iranians, but Tbilisi has not, as yet, signed the transportation agreement.

Meanwhile, Armenia has started talks with China to have a proposed multi-billion-dollar, 470-kilometer-long Iran-Armenia railway included in the Beijing-promoted Silk Road project. So far the discussions have not yielded any results.

“In [the] post-sanction era, the path towards expanding economic cooperation has been unblocked,” Iranian President Rouhani told Sargsyan during the pair’s phone chat.