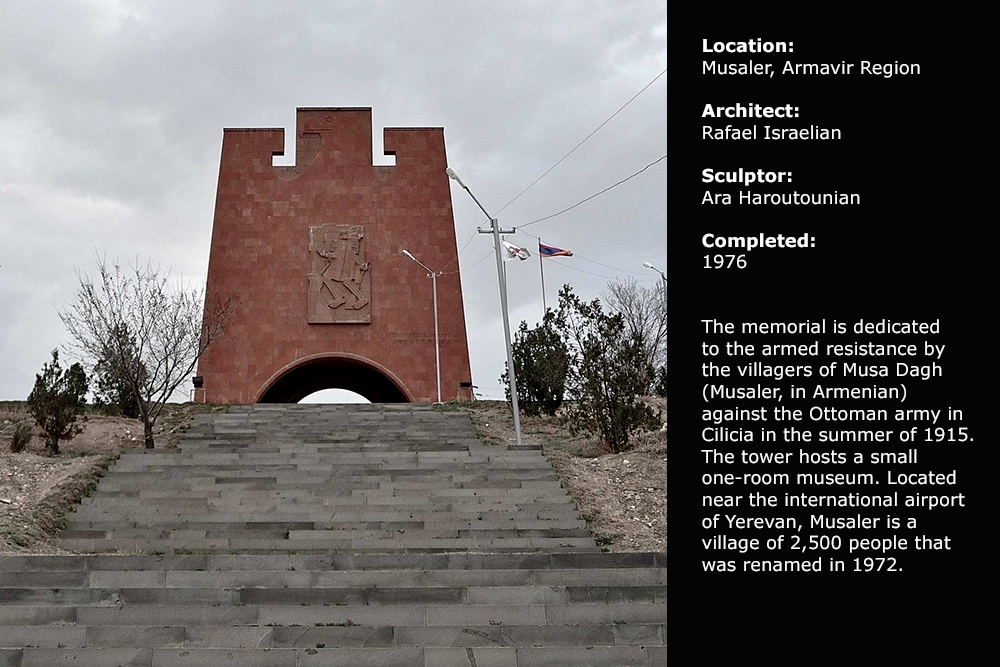 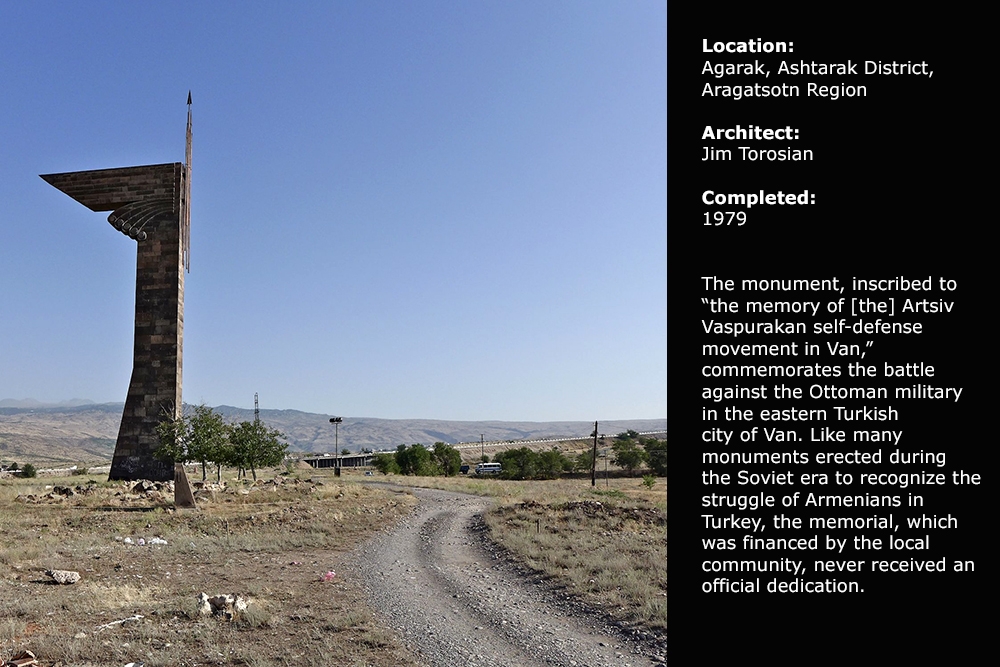 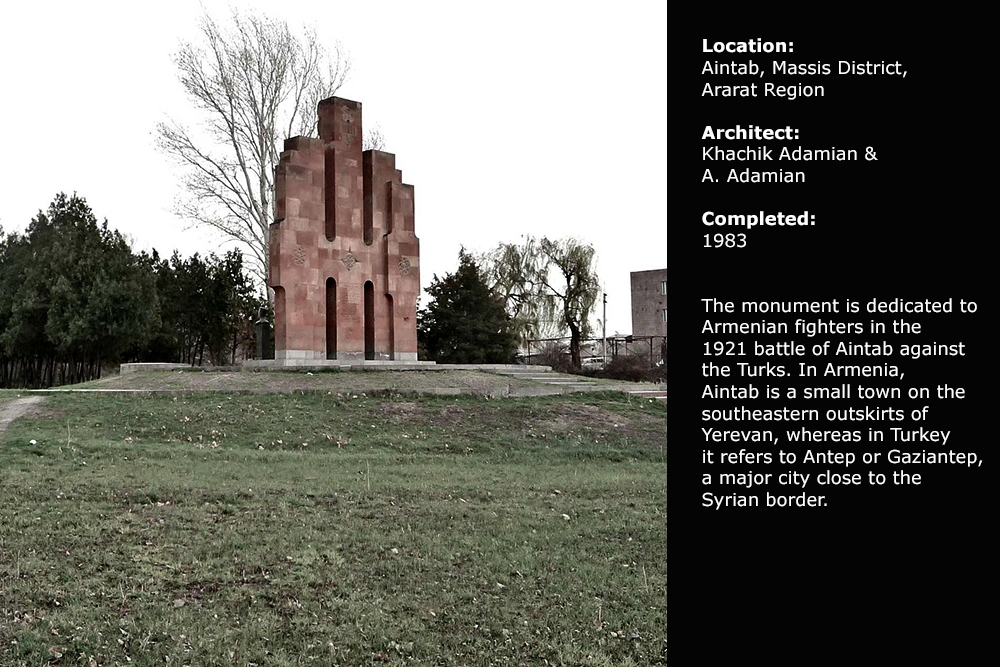 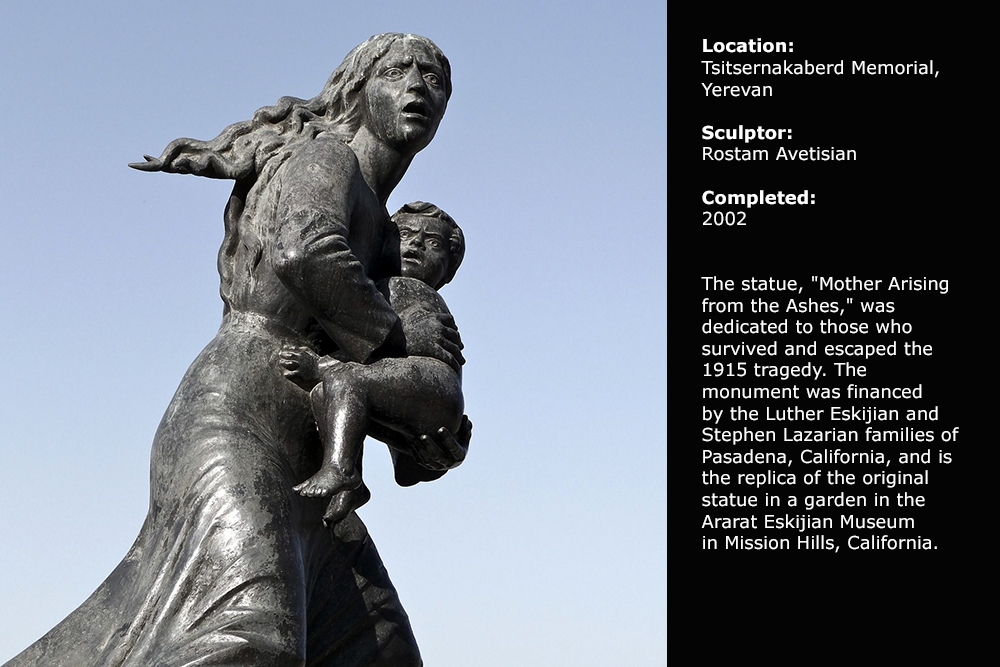 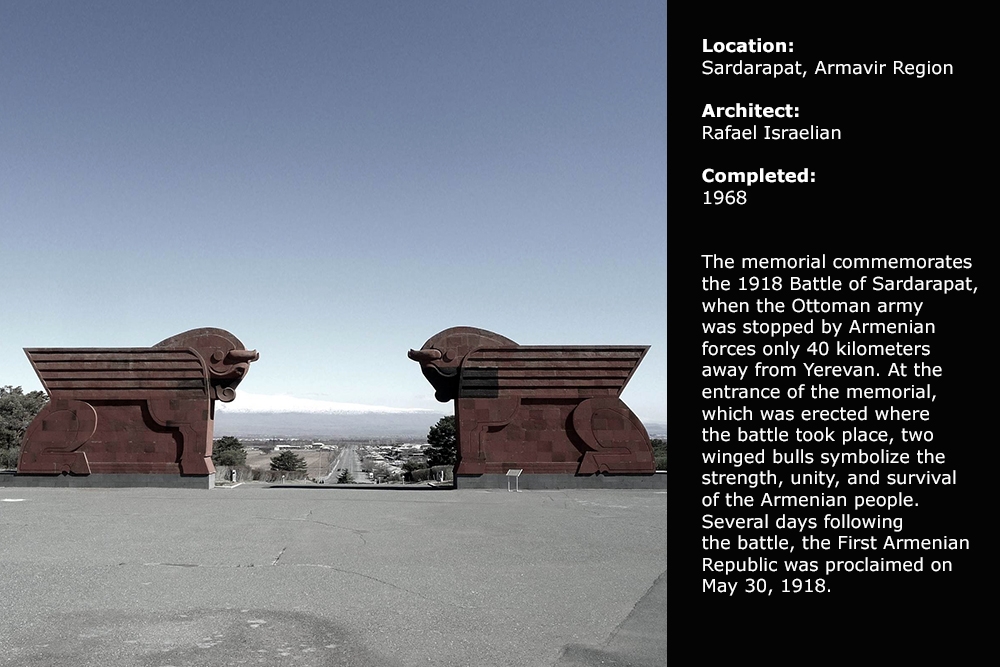 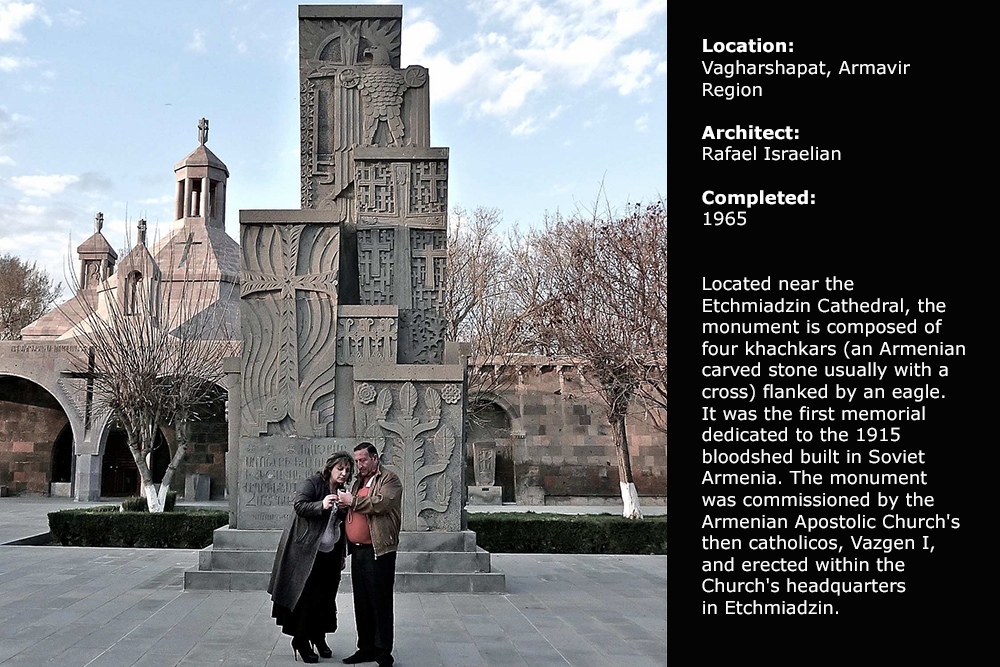 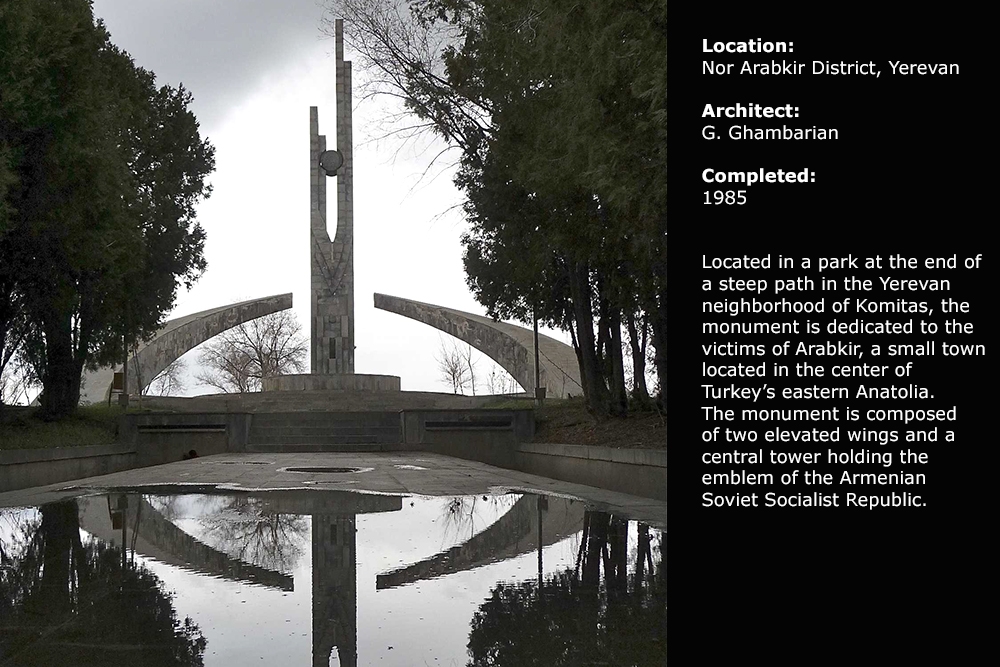 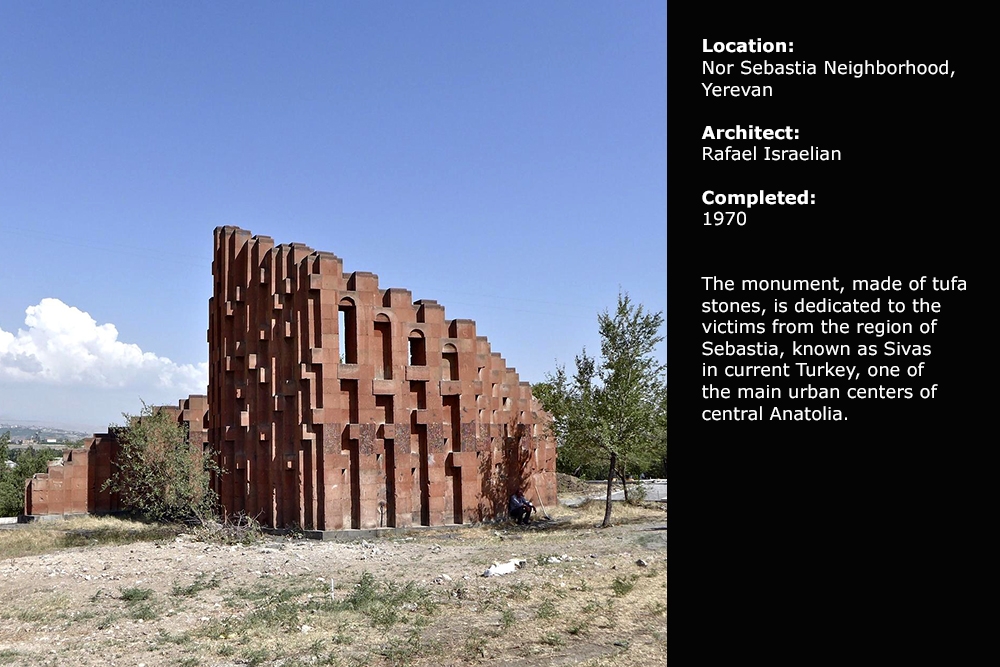 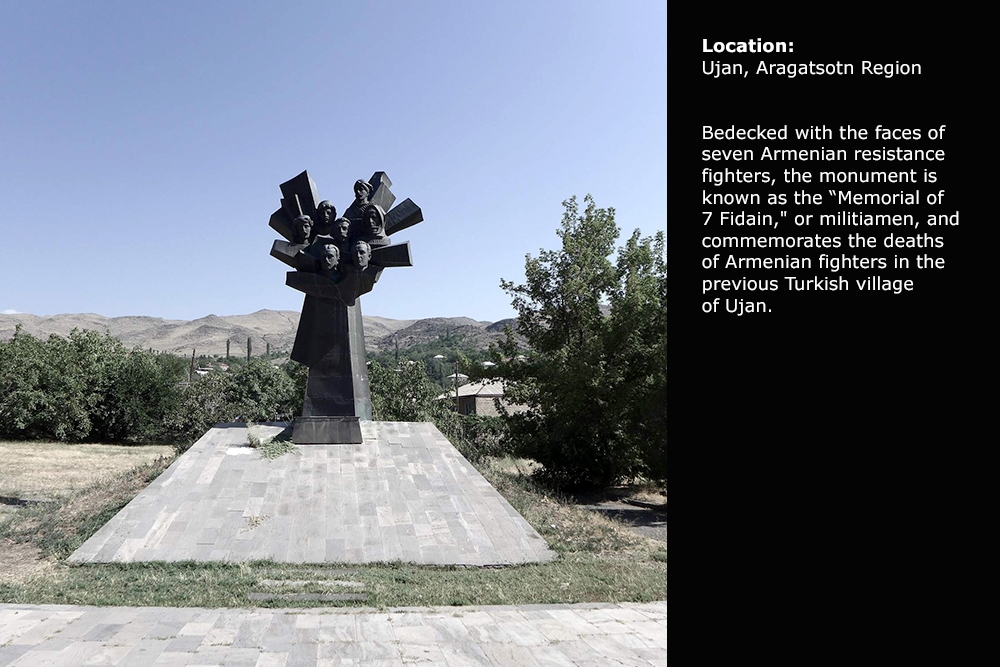 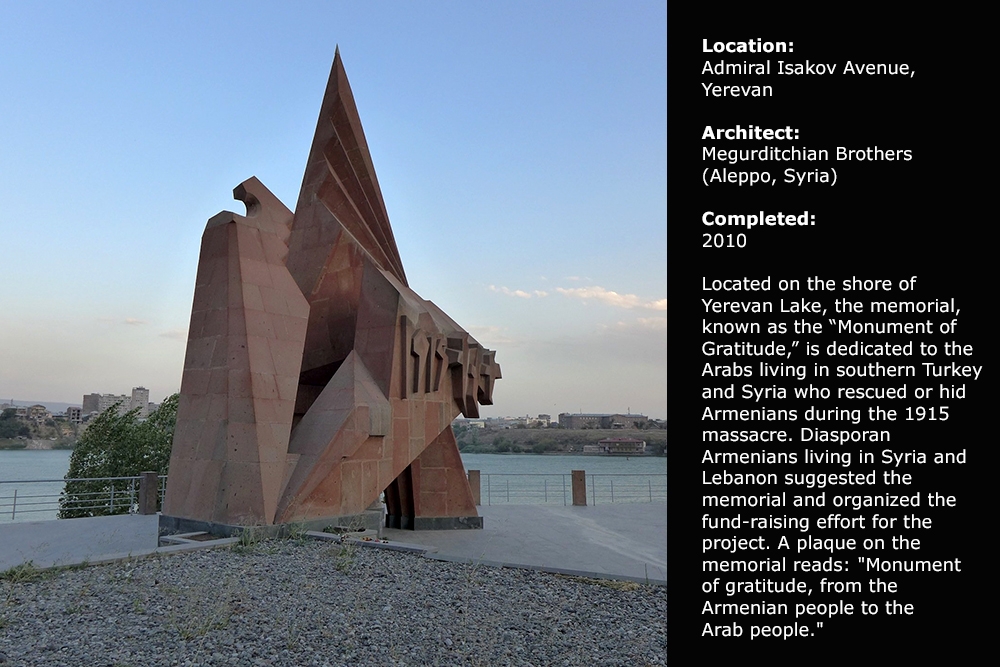 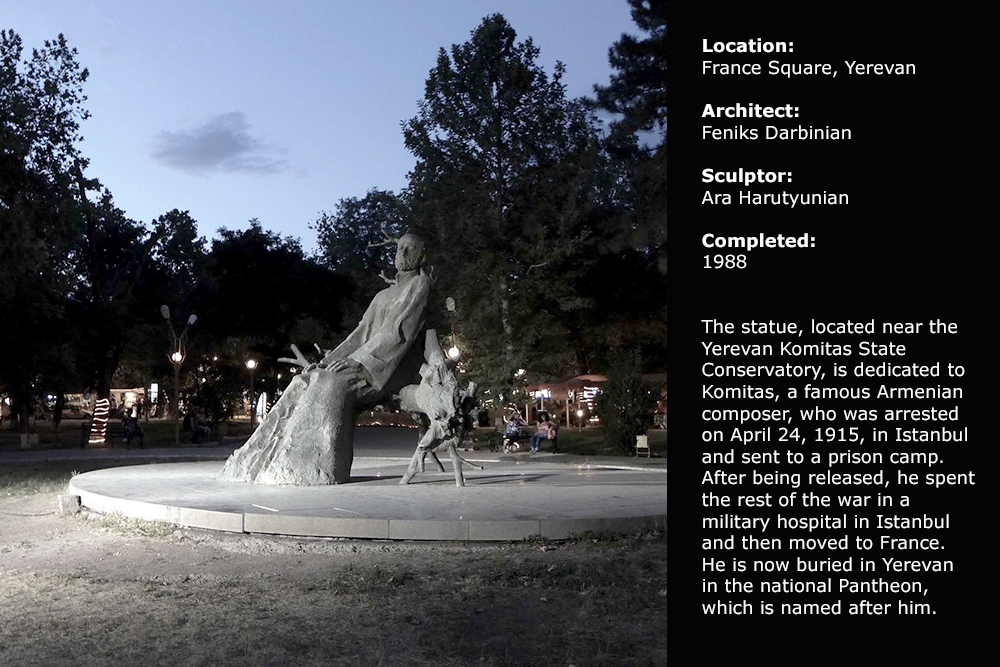 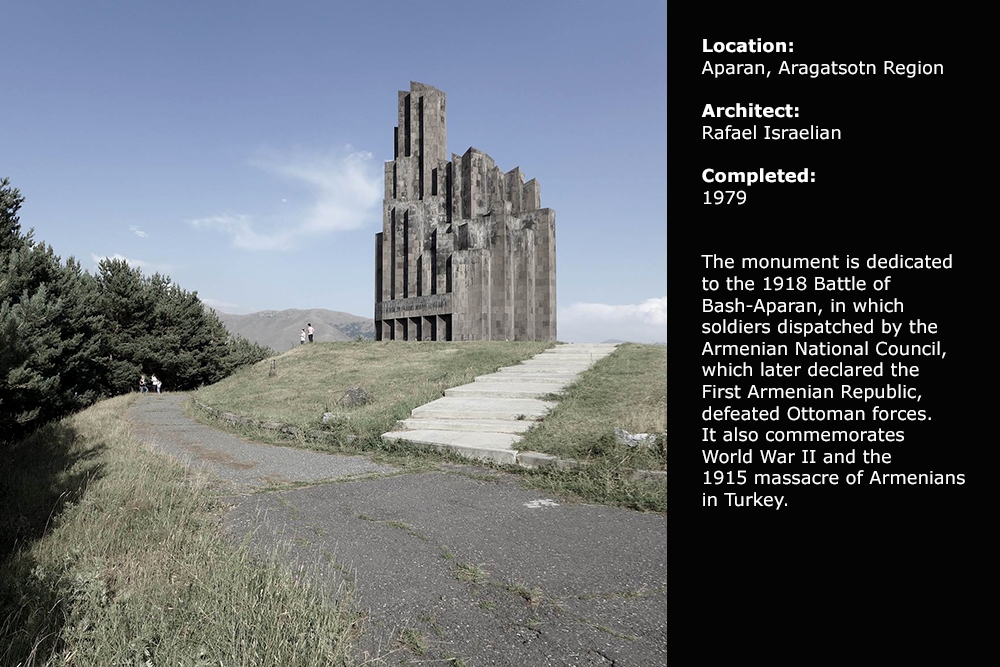 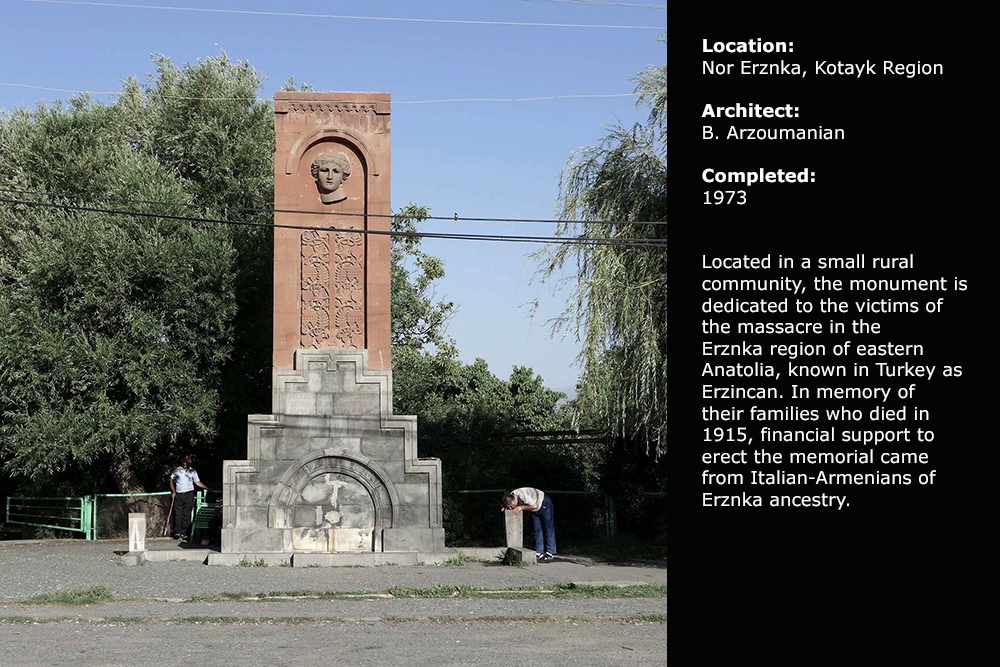 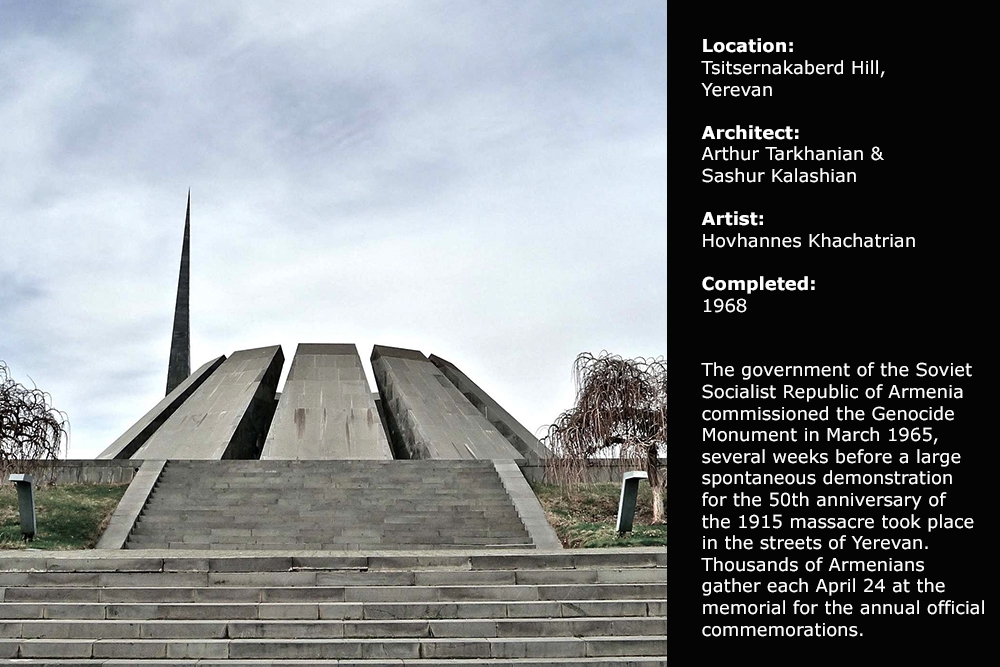 Located atop a steep hill, the Armenian Genocide Memorial is one of the landmarks of Armenia’s capital, Yerevan. But it does not stand alone.

Armenia contains nearly 30 memorials to the the victims of Ottoman Turkey’s 1915 massacre of ethnic Armenians, according to the Armenian National Institute (ANI), a Washington, DC-based research and education center. They often stand in places named after locations in Turkey that formerly contained ethnic Armenian communities — Nor Sebastia, Nor Hajen, Musa Ler or Arabkir.

“Monuments have come to serve as a location for gatherings, as the victims of the Armenian genocide have no graves,” claimed ANI Director Rouben Adalian, an historian. During the 1960s, when greater public attention also started to focus on the Holocaust, the Armenian Diaspora began the construction of monuments to the victims of 1915.

In Soviet Armenia, Adalian added, the topic generally had been suppressed. None of the monuments were built before 1965. “[I]t was not even discussed until 1965 when there was a public outcry that the genocide should be remembered.”

Many monuments were built throughout Armenia in the 1970s and 1980s; most adhere to a stark symbolism. Since the collapse of the Soviet Union in 1991, they often are smaller and use more religious and ethnic-identity references than previously would have been allowed.

In several locations, graves of soldiers killed during the 1988-1994 war with neighboring Azerbaijan over breakaway Nagorno Karabakh have been placed next to the memorials.

Yet other than the best-known memorials in Yerevan, the northern village of Aparan and the hamlet of Sardarapat, not far from the Turkish border, most of these structures are not well maintained, and receive few visitors.

In Nor Erznka village, not far north of Yerevan, retired and unemployed men spend their time chatting in the shadow of the local genocide-monument. In Yerevan, the curved Nor Sebastia memorial is filled with broken bottles.

Armenia’s abundance of monuments, though, stands in sharp contrast to the complete lack of such sites in neighboring Turkey.

That absence is felt in Ujan, a rural community 30 kilometers northwest of Yerevan that contains a large statue with the faces of seven Armenian fighters. “Each year, on April 23, we write the number of the anniversary with tires on the mountain and set them on fire so that it can be seen from Turkey,” some 30 kilometers away, recounted a local resident.

This year’s fire, he added, might be the last since hope no longer exists that Turkey will agree to recognize the 1915 massacre, which killed an estimated 1-1.5 million people, as genocide.

“The main challenge remains how to communicate with Turkish society,” said Adalian.

For many Armenians, these monuments to 1915 manage to convey a message even when other forms of communication fail.

Clément Girardot is a freelance journalist based in France and works regularly in Turkey and the Caucasus.