The new gambit has again led to charges that the government, in its attempt to depoliticize the justice system, is simply repoliticizing it. 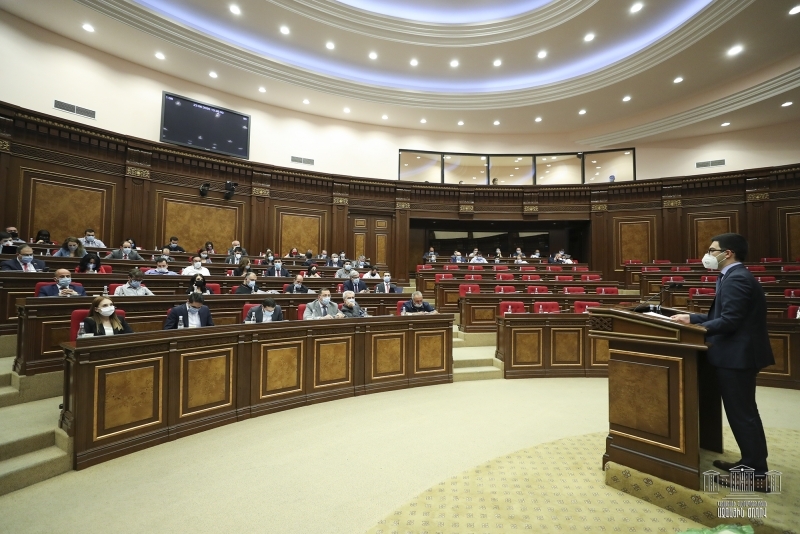 Armenia's National Assembly debates controversial changes to the country's constitution that would result in the immediate removal of three senior judges. (photo: parliament.am)

Armenia’s ruling party has passed a constitutional amendment that would immediately remove three of the nine judges on the country’s highest court.

The new law was passed unanimously in a June 22 emergency session that was boycotted by the two opposition parties in parliament.

The move is the latest effort by Prime Minister Nikol Pashinyan and his allies to reform Armenia’s justice system, which they say is packed with judges loyal to the former regime. The Constitutional Court, in particular, “represents the corrupt regime of Serzh Sargsyan, rather than the people, and it must go,” Pashinyan has said.

The amendment was introduced by Pashinyan’s My Step faction the same day that the Venice Commission, the Council of Europe body that advises member states on constitutional law, issued an opinion on an earlier proposal to reform the Constitutional Court. The commission for the most part supported Armenia’s approach, though it added that it “regretted” that the new legislation contravened some of its recommendations, in particular the suggestion that the removal of old judges take place gradually rather than immediately, as the new law stipulates.

The law introduces a 12-year term limit for all judges. While the current constitution, which went into force in 2018, also imposed a 12-year term limit, it didn’t apply that to judges currently serving. The new law would apply it to all judges, and would in particular affect three members of the court who have already been on the bench for more than 12 years.

The law also stipulates that new candidates to replace those judges should be nominated within a month, and that after the new judges are seated the court should elect a new chairman. The current court chair, Hrayr Tovmasyan, has been a particular target of Pashinyan’s. The Venice Commission also had advised Armenia not to rush to replace the chair of the court.

“I’m proud of my political team, the My Step faction,” Pashinyan posted on Facebook following the law’s passage.

Tovmasyan told journalists the day after that “I will continue to go to work every day” and that “as a lawyer, I am ashamed of what happened yesterday in the National Assembly.”

In order to ensure that the new law doesn’t face any roadblocks, parliament bypassed the normal procedure of sending it to the Constitutional Court and getting it ratified by the president.

Allowing the court to rule on its own dissolution “would be an obvious, direct conflict of interest,” Justice Minister Rustam Badasyan told parliament during the discussion of the amendments.

The machinations amounted to the “destruction of the rule of law” in Armenia, said Avetik Ishkhanyan, a human rights activist and the head of the Armenian Helsinki Committee.

“At this moment in the National Assembly, in the name of democracy, the destruction of the rule of law is taking place,” Ishkhanyan wrote on Facebook. “So in the so-called ‘new Armenia’ the prime minister, taking advantage of the epidemic, instructing and threatening his 88 toy-deputies, not caring about international obligations, is carrying out an unconstitutional coup.”

The fight over the Constitutional Court began in earnest in June 2019, when the government appointed an ally to the court who then tried to unseat Tovamasyan on a technicality. The Venice Commission then criticized that effort and said that parliament’s support of it was “disturbing.”

Following a September 2019 ruling in which the court decreed that the arrest of former president Robert Kocharyan was “unconstitutional,” parliament tried to remove Tovmasyan and security services opened up criminal investigations against him.

In February, Pashinyan proposed a referendum to dissolve the court and even took time off from his job to campaign for it, but the coronavirus lockdown forced him to put it off.

The Constitutional Court is scheduled on July 7 to rule on the constitutionality of the charges against Kocharyan. Following an ambiguous ruling in May on the case from the European Court of Human Rights that both sides said bolstered their case, and a separate subsequent ruling from the Venice Commission, the government may fear that the court is going to rule against them, said Benyamin Poghosyan, head of the Yerevan think tank Center for Political and Economic Strategic Studies.

That may explain the hasty adoption of the amendments, Poghosyan said. “So, perhaps Pashinyan was in a hurry to make these changes in the Constitutional Court and couldn’t wait another week to launch the process,” he told Eurasianet.

The parliamentary opposition is seeking to challenge the law in the Constitutional Court. In spite of the new law attempting to circumvent the court’s conflict of interest, the constitution allows members of parliament to ask the court to rule on legislation. The Prosperous Armenia party – led by recently indicted oligarch Gagik Tsarukyan – has collected signatures from its 25 members of parliament. To reach the one-fifth threshold to get the court to act it needs at least two more from the other party, Bright Armenia. Bright Armenia officials have yet to comment.