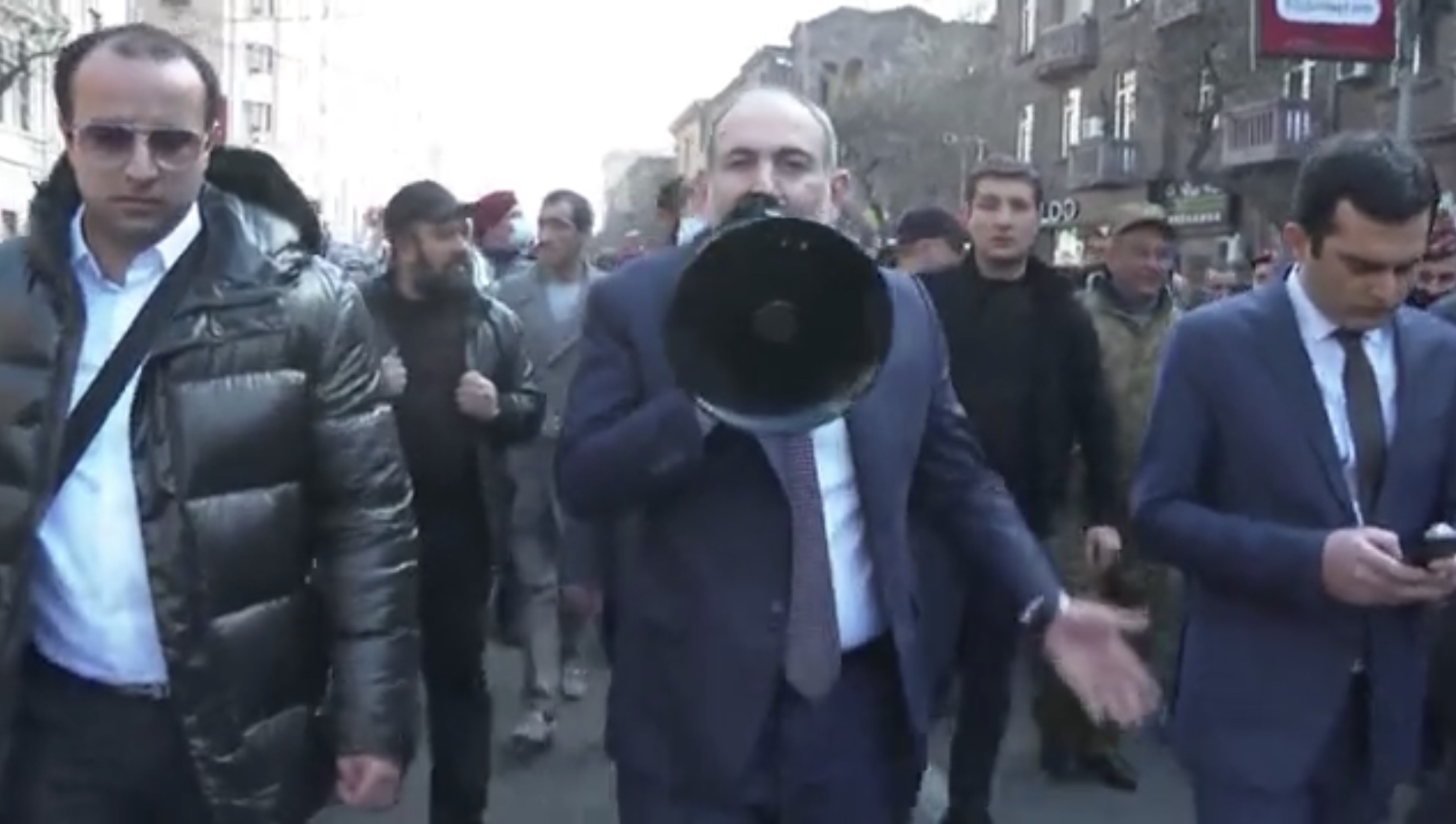 Armenian Prime Minister Nikol Pashinyan rallies supporters in February 2021 following a call by the leadership of the armed forces for him to step down. (photo: Facebook live stream, Nikol Pashinyan)

Armenia has restructured its Defense Ministry to make the head of the armed forces the deputy defense minister, in an apparent attempt to increase government control over the military.

The move comes a year after the military leadership called on Prime Minister Nikol Pashinyan to resign in the aftermath of the 2020 war defeat to Azerbaijan, in what Pashinyan called a “coup attempt.”

On July 6, Armenia’s parliament on a 58-0 vote adopted amendments to the country’s defense law that makes the head of the armed forces also the deputy defense minister. Opposition deputies boycotted the vote.

“The armed forces must report to the defense minister and the commander-in-chief,” Defense Minister Suren Papikyan told the members of parliament. While in other ministries the first deputy minister becomes acting minister if the minister is unable to carry out his or her duties, the new amendments prohibit that in the case of the defense ministry.

Pashinyan promised a major reform of the military shortly after the 2020 defeat, but this is the first significant restructuring. It appears to be motivated by the events of February 2021, when dozens of high-ranking officers, including the chief of staff of the armed forces Onik Gasparyan, called on Pashinyan to resign.

Pashinyan ultimately dismissed Gasparyan and more than 40 other officers, but it was the sharpest moment in the long-running political crisis he has faced since 2020.

“They [ruling party deputies] think that this way they will ensure tight control over the military which will preclude any political statements or actions by generals,” Tigran Abrahamyan, an MP from the opposition I Have Honor bloc, told RFE/RL in an apparent reference to Gasparyan.

Pro-government MPs made the same argument.

“When the opposition discusses the statement made by Onik Gasparyan, yes, the chief of the armed forces has no right to make such statements, he violated Constitutional norms,” Armen Khachatryan, an MP from the ruling Civil Contract party, said during the discussion of the bill.

Since the end of the war, there have been frequent shakeups in the military leadership. Following Gasparyan’s dismissal Pashinyan appointed Artak Davtyan, who was himself dismissed shortly after that along with four other senior officials. The position has been empty since then. Since Pashinyan took power in 2018, there have been four heads of the armed forces.

Davtyan, former defense minister Davit Tonoyan, and other officials are currently under an ongoing criminal investigation into alleged purchases of defective ammunition.

The new reform also will put the defense ministry in charge of purchasing military equipment, rather than the armed forces. “The armed forces should deal only with the duties that are reserved for them: to protect the borders of the Republic of Armenia, conduct combat training, and enhance the combat capability of our army. Other tasks should be handled by the defense ministry,” Papikyan said in a June 9 cabinet discussion of the bill.

At the parliament session Papikyan said that the reform had been discussed with Russia, a military ally of Armenia. The Russian military leadership has a similar structure, with the chief of staff of the armed forces also serving as deputy defense minister.

But skeptics suggested that that was not a strong endorsement of the idea.

“It's an objective reality that the management in Russia is not efficient and that has been proven during their war of aggression against Ukraine,” Artur Sakunts, chairman of The Helsinki Citizens’ Assembly of Vanadzor, told local news website 1in.am.