Two weeks after the country largely ended its lockdown, the number of coronavirus cases has shot up and the government is preparing to use a repurposed sports hall to treat patients. 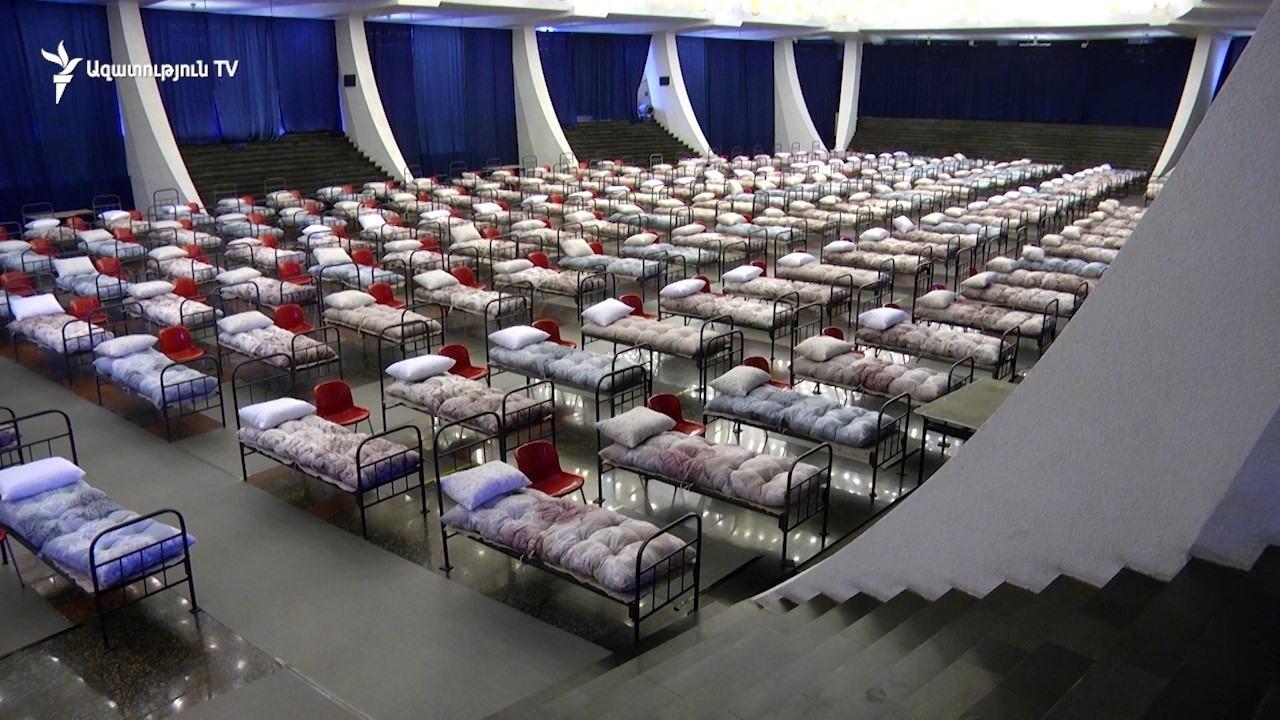 Screenshot from an RFE/RL report on the burgeoning coronavirus outbreak in Armenia.

In March, an image of a cavernous, Soviet-era sports hall in the shadow of the Armenian genocide memorial in Yerevan shocked Armenians. The hall was filled with row after row of empty beds, set aside in case the coronavirus outbreak overwhelmed the country’s hospitals.

Now, new images have shocked them anew: the same hall and beds, now with sheets and pillows, all ready to be used.

Now, Torosyan said that newly infected patients will be treated in their homes. “This change is due to two factors,” he said in a May 19 Facebook post. “The first is the increase in the number of citizens with a positive diagnosis, which is increasing daily, and the second is a change in the strategy for managing diagnosed cases from the point of view of optimal use of beds and other resources.”

This comes just over two weeks after Armenia largely ended its lockdown, opening up cafes, restaurants, and factories. Prime Minister Nikol Pashinyan said it was part of a new strategy under which the fight against the coronavirus would be “decentralized” and that people would be responsible for themselves. “Each citizen is taking on the responsibility of the fight against the epidemic. The first [responsibility] is not to be infected and the second is not to infect,” he said.

The government lifted the lockdown in spite of the fact that the number of coronavirus patients was continuing to rise, and that rise has only accelerated since. In recent days the country has been recording around 300 new cases a day; the record to date is 361 new cases on May 17.

The country is shooting ahead of its neighbors in terms of prevalence of the disease. As of May 19, Armenia registered 118 new cases per million residents. Iran registered 27, Turkey 13, Azerbaijan 1, and Georgia 0.

Meanwhile, the government continues to try to fight independent reporting about the outbreak.

One of the first responses was to introduce censorship against all news about the disease except from official sources, but it backed down two weeks later following international criticism of the move.

Now, the investigative website Hetq has been stymied by the Health Ministry in its efforts to create a database tracking the disease. “We are not doctors, but we thought that if we collected that data in detail, it would even be possible to help prevent and plan actions,” Hetq’s editor, Edik Baghdasaryan, wrote on May 18.

To do so, it filed a Freedom of Information Act request to the ministry asking for certain data. By law, the ministry is required to respond in a timely fashion, but Torosyan said the request was “absurd.”

“Isn’t it clear why we’re replying late?” he shot back on Facebook. “Our entire press unit isn’t at work. Half are out sick, the other half’s in isolation. Before this, they were working all day and had no time to answer such ridiculous questions.”

One of Hetq’s requests was to check to see whether Armenia was using the type of ventilator that caused fires in hospitals in Moscow and St. Petersburg. Torosyan responded: "We didn't do an inventory."

“Given the small number of such ventilators in Armenia, an inventory could have been done in a few hours. It seems that no one in the ministry, Torosyan included, thought it was necessary to check,” Baghdasaryan wrote.

Reporters Without Borders criticized Torosyan’s response. The organization “condemns this as an attempt to obstruct their work and the right to information. We call on the authorities to answer to the media,” it wrote in a tweet.