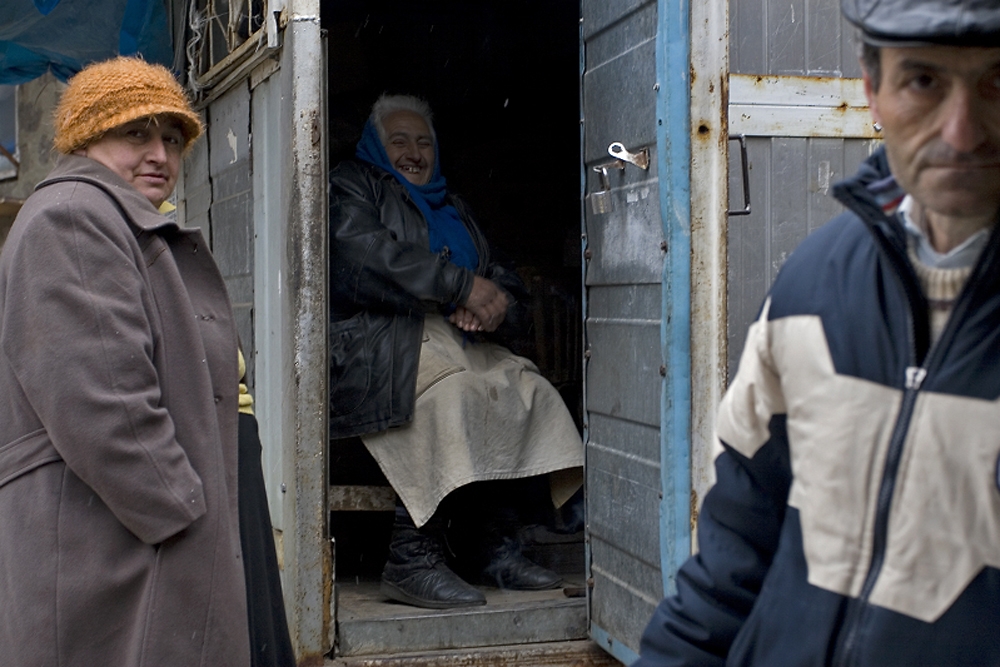 How much more can they take? (Photo: Anahit Hayrapetyan)

The Armenian government wants to increase salaries of senior leaders and MPs by over 200-percent, while eliminating unemployment benefits. Officials contend that such measures are needed to combat corruption and improve the state’s financial picture.

As could be expected, most citizens are having a hard time buying official arguments. In Armenia, one-third of the population of roughly 2.97 million people officially lives beneath the poverty line. Unemployment officially stands at 16.2 percent, and unofficial estimates peg the rate much higher. The dearth of jobs at home is a major impetus for labor migration.

Armenia’s National Statistical Service announced recently that the country’s overall population has contracted by 7.5-percent in 2013 so far. The figure ranges from 13 percent to 17 percent in the regions, news services reported.

Against that backdrop, parliament’s initial vote of approval on October 24 to eliminate monthly unemployment benefits (18,000 drams or $44.48 per month) struck a sensitive nerve for many Armenians. The decision will affect an estimated 11,000 people, according to the Ministry of Labor and Social Welfare.

Representatives of the governing Republican Party of Armenia justify the measure by saying that programs should emphasize education, job counseling and opportunities for employment, rather than merely giving payouts to individuals who, they allege, do not always need the cash. Labor and Social Welfare Minister Artyom Asatrian earlier claimed in parliament that only 6 percent of those 11,000 individuals registered as unemployed are actually without jobs.

But many of those who are among the alleged 6 percent say they are growing desperate. "What do we have to do now? My husband used to receive unemployment benefits and we were able to make ends meet before we could find a job. Now we have to think about leaving the country, since there are no jobs and no support at all," said 38-year-old Yerevan resident Susie Mnatsakanian, a former nurse.

Prime Minister Tigran Sarkisian told parliament on November 14 that new unemployment programs will launch in 2014 with a drastically reduced budget of 2.36 billion drams (over $5.8 million). But many are not inclined to wait around. As a sign of the momentum for migration, a tIcket for the 2,236-kilometer bus ride from Yerevan to Moscow, the most common destination for Armenian labor migrants, now can be had for a mere 15,000 drams ($37.07).

Compounding the anger that many Armenians feel is the fact that officials are preparing to give themselves a big raise. A draft law would increase the monthly salary of President Serzh Sargsyan by 203-percent to 1.3 million drams, or $3,213. The monthly salaries of Prime Minister Tigran Sarkisian and Parliamentary Speaker Hovik Abrahamian would increase by 218 percent to 1.19 million drams, or roughly $2,941. The measure also will apply to ministers, deputy ministers and members of parliament.

While those rates may appear low by Western standards, they far outstrip the monthly incomes of most Armenians. In 2012, annual per-capita income stood at just $5,900, or under $500 per month. That figure is the lowest in the region, according to the Central Intelligence Agency’s World Factbook.

“Do you really think that things [with the country’s economy] are going so well that those responsible for these things, the president and prime minister, have earned the right to get a pay raise?” scoffed opposition Armenian-National-Congress parliamentarian Nikol Pashinian.

"Authorities once again have shown that they are not afraid of society,” drily commented independent analyst Yervand Bozoian.
During a question-and-answer session in parliament on October 23, the government’s chief of staff, Vacheh Gabrielian, a former deputy chairperson of the Central Bank of Armenia, claimed that not increasing senior officials’ salaries (which can fall around less than $1,000 per month) had increased the risk for corruption. Armenia, he said, “has to catch up” with the rest of the world.

A vote on the proposal, likely to sail through the RPA-dominated parliament, is expected by the end of December.

RPA Deputy Chairperson Gaust Sahakian, who heads the party’s parliamentary faction, told EurasiaNet.org that such salary increases are needed for their “eye-catching effect” and “to enhance the country’s reputation.” Sahakian did not address how eliminating unemployment benefits will enhance the government’s reputation.

Independent political analyst Stepan Danielian said the combined effect of these measures will only be to encourage migration. Sensing a political opportunity, Armenia’s opposition parties, which hold 52 out of parliament’s 131 seats, are eager to sound the alarm.

“It is immoral to talk about increasing [lawmakers’ and government officials’] salaries when more than 1 million people live beneath the poverty line,” asserted Zaruhi Postanjian, secretary of the Heritage Party's four-member parliamentary faction.