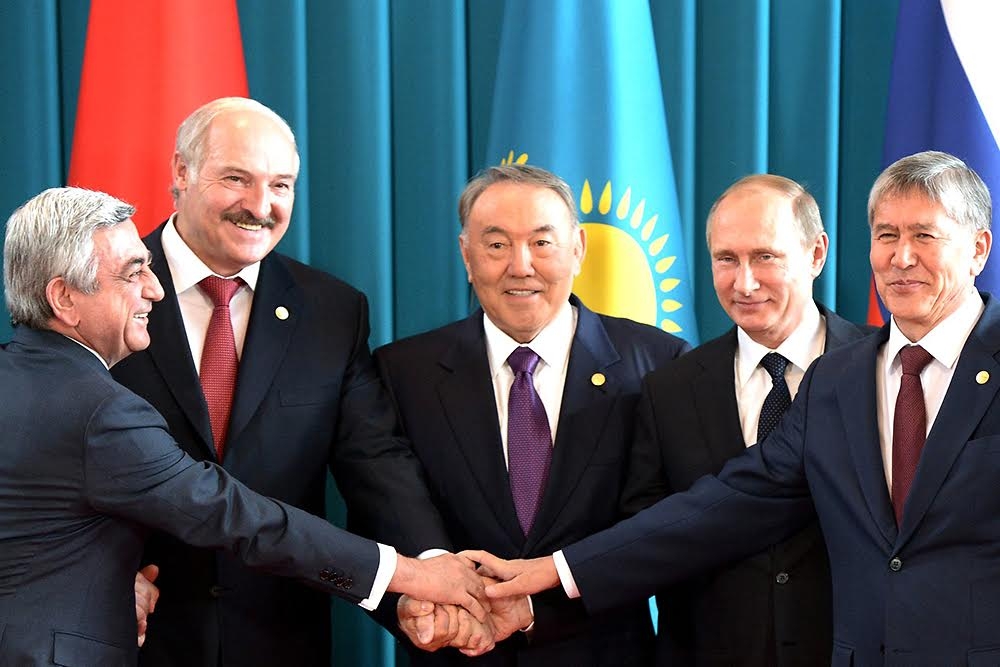 The EEU: still all for one and one for all? (Photo: Russian Presidential Press Service)

A ceasefire is technically in place as Armenia and Azerbaijan search for a breakthrough stalemated political talks over the Nagorno-Karabakh territory. Yet there has been a sharp uptick in casualties along the so-called contact line. The trend is prompting some Armenians to reexamine their country’s strategic ties to Russia.

Since 2013, the number of Armenian soldiers killed on the frontline has seen a more than five-fold increase — rising to 31 for the first nine months of this year. In 2014, 28 Armenian soldiers died along the contact line, marking a drastic increase from six the previous year.

Russia, which maintains an army base in the northern Armenian town of Gyumri, has long been viewed by Armenians as a vital ally. But with the temperature again rising in the Karabakh conflict, some in Yerevan are wondering just what Moscow is willing and able to do to defend Armenia’s interests. The appearance that Russia seems intent on keeping its strategic options open is leaving supporters of President Serzh Sargsyan’s administration with the challenging task of managing expectations.

Vahram Baghdasarian, the head of the governing Republican Party of Armenia’s parliamentary faction, underlined to EurasiaNet.org that “Russia is not there for preventing Azerbaijani aggression.”

In January, Armenia made a big geopolitical bet by joining the Moscow-led Eurasian Economic Union (EEU), a decision that required Yerevan simultaneously to back away from stronger economic ties to the European Union. Armenian President Serzh Sargsyan, a former defense minister and veteran of the 1988-1994 Karabakh war, helped sell EEU membership to citizens by claiming that it would reinforce the country’s security.

But most Armenians are now feeling much less secure, at least in an economic sense, than prior to the country’s EEU accession. Russia, which is experiencing a dramatic economic decline, has hampered more than helped Armenia’s growth prospects so far. Over the first half of 2015, Armenia’s exports to Russia, the wealthiest EEU member, decreased by 35 percent compared with the same period the previous year. Imports sagged by about 12 percent, according to official data.

Meanwhile, financial transfers from Russia, a critical element of Armenia’s economy, have dipped sharply. This August, remittances experienced a 49 percent decline over the same month in 2014 – falling from $147.8 million to almost $71.3 million. Russia was the country of origin for almost 70 percent of the remittances sent home in August this year.

Forty-year-old Yerevan physicist Vache Gevorgian, whose relatives live in the border region of Tavush, derives no sense of security from such figures. “Where is the safety, where is the security that the government spoke about?” he asked. “What is the response for the border villages?”

Beyond the EEU’s design for closer economic integration among member states, some Armenians seemed to assume that EEU accession would bring stronger security commitments from Russia. Any such assumptions are misplaced, Armenian Deputy Foreign Minister Shavarsh Kocharian stated categorically to reporters in September. “The EEU has nothing to do with security,” Kocharian stated. “In the case of our security and defense, we have to rely primarily on ourselves.”

The mantra of self-reliance is heard in areas near the Armenian-Azerbaijani contact line. In the border village of Chinari, located several kilometers from the frontline, the elected government head, Samvel Saghoian, says villagers are not expecting Russian help if Azerbaijani forces attack. “We have a good characteristic — we resist,” Saghoian said. “Russia, security, none of that is what we discuss.”

Some analysts believe the Armenian government tacitly encouraged voters to believe that the EEU would mean more military support from Russia. “The government used the term ‘security’ because it is understandable for the people, and the issue of defense, of peace, is highly vital [to Armenia], dating back for centuries,” commented independent political analyst Saro Saroian.

Russian officials have avoided making statements that might suggest the Kremlin would side with Armenia over Azerbaijan in Karabakh-related matters. In September, however, Moscow granted Yerevan credit for the $200-million purchase of advanced Russian weaponry.

Along with France and the United States, Russia is a member of the Minsk Group, which is charged with overseeing the long-deadlocked Karabakh peace process. The North Atlantic Treaty Organization, in a draft report this spring, claimed that the Kremlin “has little interest in a solution” to the conflict, now in its third decade, since the standoff gives Russia regional leverage.

One analyst, however, argues that that leverage can enhance Armenia’s security, even if the EEU does not. “The EEU is not a security union, but if need be, Russia will use all its leverage; just as much as Armenia might need,” commented political analyst Sergei Minasian, deputy director of the Yerevan-based Caucasus Institute.