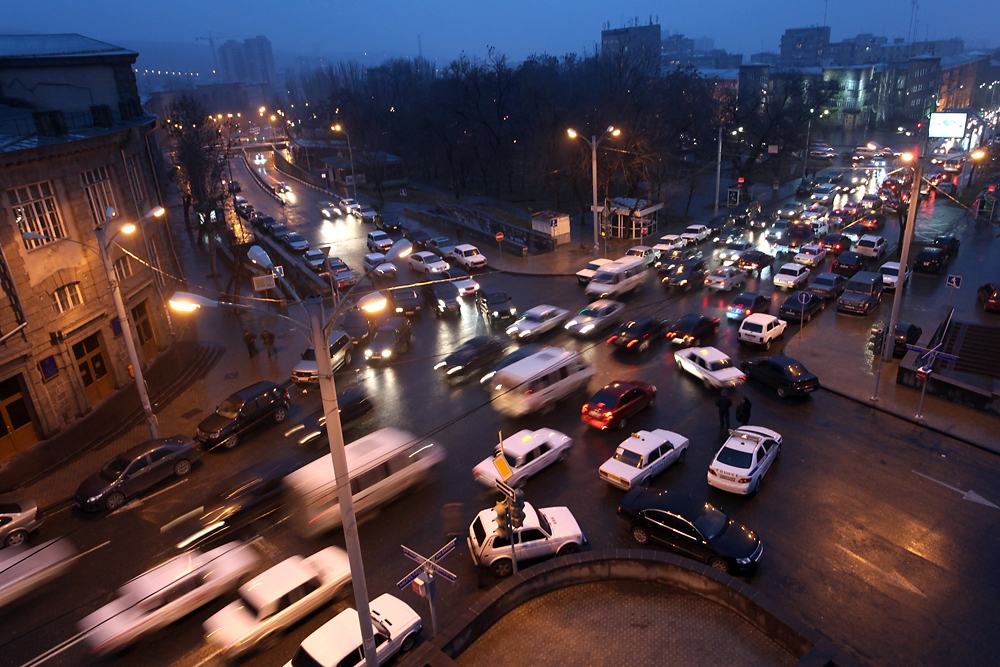 Still recovering from the political fallout of a recent bus boycott, Yerevan’s city government is now grappling with growing public anger over allegations that a privately run parking system is serving the business interests of a close associate of Armenian President Serzh Sargsyan.

Transportation in this capital city of 1.1 million people already has proven a tricky topic for the municipal government, which is controlled by Armenia’s ruling Republican Party of Armenia. In July, a boycott of public buses and protests over increased fares forced the city to back down from a price hike. Many residents saw the higher fares as benefiting members of the political elite who are alleged to run bus companies.

Critics of Yerevan’s private parking spaces are making similar arguments. “It turns out that someone has simply drawn red lines in the city and is trying to make a profit out of it,” said MP Naira Zohrabian, spokesperson for the opposition Prosperous Armenia Party.
Throughout the South Caucasus, elderly men demanding small change from drivers for watching their cars tend to be the extent of “private” parking in urban areas. Last August, Yerevan Mayor Taron Margarian, arguing that more space is needed to accommodate the city’s auto population, vowed to upgrade this informal system.

The privatization of parking spaces became the designated substitute, but the company that won the tender, Parking City Service, (which happened to be the only contender), has no known experience in the field. That lack of expertise has prompted many local observers to cry that the fix was in.

“The truth is they would not let ordinary people interfere in this business. They would not let mere mortals into this field,” scoffed independent political analyst Yerevand Bozoian. “This sphere was supposed to be regulated by the Mayor’s Office, but, instead, it belongs to a private company, which earns billions [of drams] out of nowhere.”

According to Armenia’s company registry, Parking City Service, founded a month after the mayor’s announcement, is owned by Tigran Michael Harutiunian, who is registered at the same Yerevan address as businessman Michael Harutiunian, a close ally and childhood friend of President Serzh Sargsyan. The two Harutiunians appear to be one and the same.

Michael Harutiunian is the registered owner of one of the country’s largest corporate taxpayers, Mikmetal, a major producer of wire rods and bars, and a billboard operator.
Those alleged connections have prompted many to charge that the city simply is using parking to line the pockets of another presidential crony. The fact that the city did not receive any fee or other form of payment for handing over the parking spaces – when parking revenue is capable of generating hundreds of millions of dollars in revenue for some US cities – has stoked suspicions of cronyism.

Under the deal, Parking City Service has painted red dotted lines throughout downtown Yerevan to designate fee-based parking spaces. The total number of spaces it claims is unknown; the company says the process is ongoing. It plans, however, to retain 70 percent of the collected fees, with 30 percent going to local taxes and “other expenses,” according to Parking City Service Director Vazgen Harutiunian.

Parking City Service itself claims to handle enforcement of those fees – tracked by license plate numbers registered at the time of payment -- but, in a further blurring of the lines between private and public spheres, Yerevan’s traffic police on September 10 announced that it also will impose 40,000-dram ($100) fines and impound cars which fail to park in designated areas.

Many Yerevan residents see no reason why they should pay a private company, rather than the city, for the right to park their car in front of their own residence or workplace. “Why should I pay anybody for parking my car in my own city?” asked one city resident, who declined to be named. “How long are we going to be cash-strapped just because they want to wring money out of thin air?” he asked in reference to the city government.

“Why didn't [the city] allow paid parking charges to go into the local budget? After that, they would be able to develop an investment program based on the generated income,” said Sakunts, head of the Helsinki Citizens' Assembly’s Vanadzor office. “Besides, what is the economic justification for [designating] those particular spaces for paid parking?”

The mayor’s office did not respond to requests from EurasiaNet.org for comment.
But its sensitivity to criticism on the topic already has been established. After the bus boycott erupted, the introduction of the paid-parking spaces, originally scheduled for August 1, was delayed for a month.

This time, resistance is under way as well, but, as yet, remains relatively limited. Some residents have painted over the parking spaces’ red lines; others have damaged notice boards that explain the parking rules. Still others have called for drivers to refuse to pay to park. Zohrabian, the opposition MP, said that she plans to ask parliament to scotch the private parking spaces. “This is a clear case of robbery, and legislators need to prevent it,” she said.