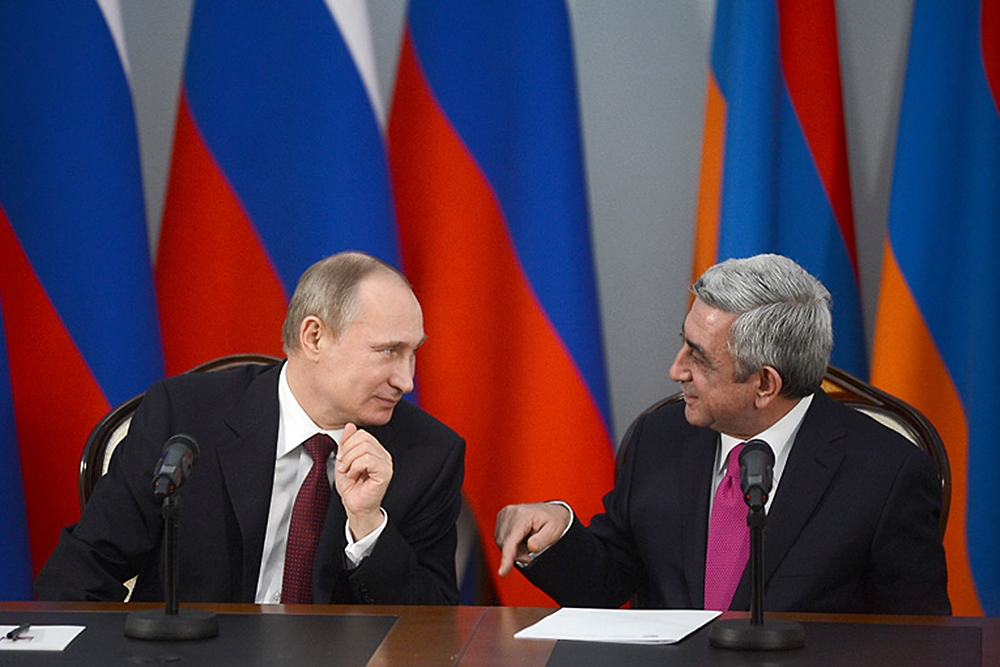 Wariness of “European values” within a significant segment of Armenian society is providing fuel for a brewing culture war in Armenia.

The government’s push for closer ties with Russia appears to be widening a cultural divide in Armenia. The gap was on display during a May 9 court hearing concerning a domestic-violence case in the eastern region of Gegharkunik, one of Armenia’s most socially conservative areas. At one point during the proceedings, Robert Aharonian, an outspoken, pro-Russian activist who was attending the hearing, lashed out at two North American-born women’s rights advocates for promoting “European values” that condemn physical violence against women.

“Why have you come to distort Armenia?” said Aharonian, the 45-year-old leader of the Armenian-Russian Union and a former presidential candidate for the Progressive Socialist Party. A man in Armenia “has a right to slap his wife,” he claimed, according to local media reports. The issue of domestic violence has become a hot topic for public debate in recent months. Diaspora Armenians who “don’t know the local traditions” should leave Armenia, Aharonian continued, swearing vividly. “Armenia is for local people, for Armenia-Armenians, and the day will come when we will deport you all and shut the border.”

The comments specifically targeted American-Armenian Maro Matossian, head of the Yerevan-based Women’s Support Center, and Women’s Resource Center Director Lara Aharonian, a native of Canada and no relation of Robert Aharonian. Both women are long-term Armenian residents who have been critical of the government’s civil-rights record. Both have become targets over the past few years for anti-European-integration activists. [Editor’s note: The Women's Support Center and the Women's Resource Center both receive support from the Open Society Foundation-Armenia, a part of the Soros foundations network. EurasiaNet.org operates under the auspices of the New York-based Open Society Foundation, a separate entity in the Soros network].

Tension between native-born Armenians and members of the diaspora is nothing new. But the government’s failure to comment on Robert Aharonian’s verbal attacks, a hot topic on social networks, has raised suspicions that officials silently condone them as a way to push back against critics; particularly during the run-up to Yerevan’s projected June-1 sign-on date with the Moscow-led Customs Union with Russia, Kazakhstan and Belarus.

Opposition activist Hranush Kharatian, a former head of the Department of National Minorities, suggested that the focus on the family, “a very sensitive spot for us Armenians,” is intended to isolate as “outsiders” and “enemies” those diaspora Armenians “who are not the authorities’ favorites.”

Anna Safarian, an advisor to government-appointed Human Rights Defender Karen Andreasian, condemned Aharonian’s words as “harassment” and “hate-speech.” Meanwhile, Ministry of Diaspora Chief of Staff Firdus Zakarian maintained that Robert Aharonian’s remarks were beyond the mainstream, and thus not worthy of a response.

“We cannot keep responding to such things,” Zakarian said. “It is inconceivable for anyone with the slightest common sense that diaspora Armenians could be told to leave.”

Diaspora members long have played a key economic role in Armenia. According to the National Statistical Service, diaspora money accounted for 69 percent of the country’s foreign direct investment from 1994-2010. Each year, diaspora organizations pour tens of millions of dollars into various charitable projects as well.

These days, Russian-Armenian entities are supplying the bulk of diaspora-origin funding for Armenia-based projects. It’s worth noting that the head of one such entity, Arman Boshian of the Pan-Armenian Parents’ Committee, has emerged as a hardcore critic of the Women’s Support Center and Women’s Resource Center, the two organizations attacked by Robert Aharonian. The Pan-Armenian Parents’ Committee receives support from Sergei Kurghinian, a Russian-Armenian political personality and avid supporter of Russian President Vladimir Putin.

Independent political analyst Armen Badalian asserted that pro-Russian groups such as the Parents’ Committee were a “natural” outgrowth of a “Sovietization” trend in Armenia. “No doubt, European values are in the way, the presence of diaspora Armenians is an obstruction, because they [the diaspora] are not used to total violations of human rights and cannot tolerate them, so these [pro-Russian] movements are aimed at eliminating these obstructions,” Badalian commented.

Robert Aharonian’s denunciation of diaspora members appears not to pertain to Russian-Armenians. Aharonian told EurasiaNet.org he opposes all those diaspora Armenians who use grants to operate in Armenia, and “advocate European perversion.” He defined this “perversion” as “not human-rights defense” or “equality,” but calls “for wives to sue their husbands, turn to the police,” which, he asserted, ultimately breaks families apart.

His dislike of foreign grants may sound familiar. Russian Ambassador Ivan Volinkin in early May urged Yerevan “to neutralize” Western-financed non-governmental organizations because they were a potential “wedge” between Russia and Armenia. Matossian and Lara Aharonian have called on the government to show “zero-tolerance for bigotry.” The government’s silence should prompt diaspora Armenians who have backed Armenian authorities to understand that “they will not be welcomed in the homeland of their dreams,” Lara Aharonian added.

Representatives of some organizations representing diaspora Armenians, including the Armenian General Benevolent Union (AGBU), a New-York-City-based group that has poured about $170 million into the country since 1991, are trying to tamp down controversy.

“Dividing Armenians based on our places of birth and citizenship is a very dangerous trend and, therefore, has to be prevented, but this [attitude] is not the general trend in Armenia,” said Hovig Eordekian, deputy director of the AGBU’s Yerevan office.