"This is why you see so many young people out there - they have nothing to lose." 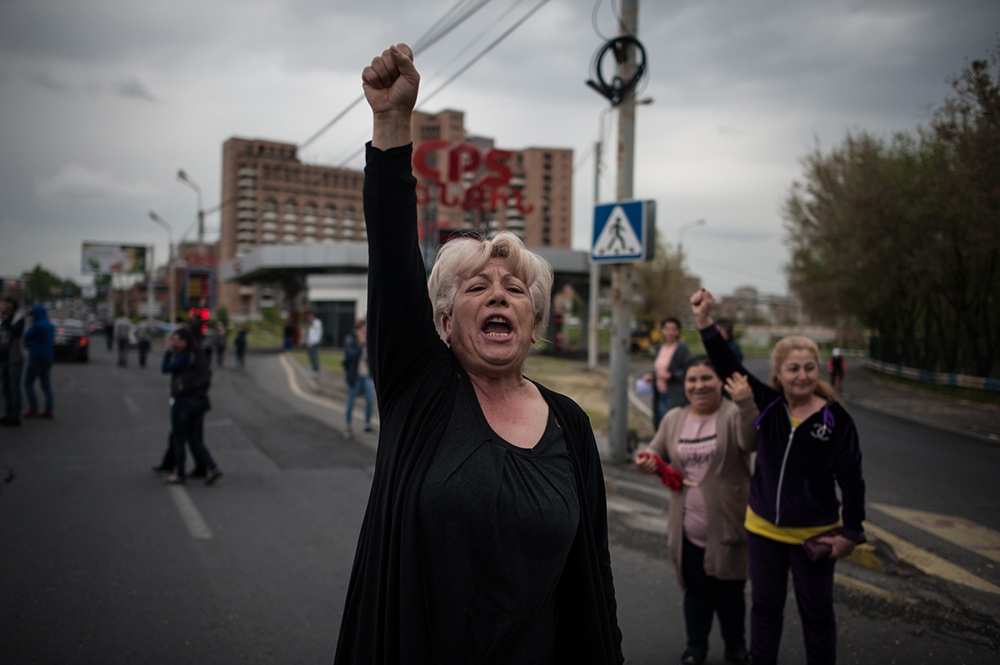 A supporter in the street. (Nazik Armenakyan/4Plus)

With larger rallies, spontaneous acts of civil disobedience, escalating numbers of arrests, and nonstop honking, the protests in Armenia’s capital continued to metastasize throughout the city on April 20. A week after they began, the demonstrations appear to be gaining momentum.

During the day, protest leader Nikol Pashinyan took his supporters on a march around some of Yerevan's more remote districts, following a pledge the night before to close “all the streets of Yerevan.” In the Davtashen area northwest of the center, Pashinyan and several hundred fans walked along a highway, many of them carrying signs reading “Honk if You're Against Sargsyan,” in protest at Serzh Sargsyan’s transition this week from long-serving president to newly powerful prime minister. The honking was at times deafening, and the campaign spread: By the afternoon, central Yerevan was a nonstop din.

Two of the marchers, Arman Abrahamyan and Sona Ter-Hayrapetyan, were skipping classes at the Russian-Armenian University. “No one is there anyway,” Abrahamyan said with a laugh.

The protesters were accompanied by a small contingent of police officers, most walking stoically but others chatting cheerfully with protesters.

In other places, however, police barely maintained control. Small pockets of civil disobedience, mostly led by young people, popped up around the city. One, at the central intersection of Mashtots Avenue and Amiryan Street, could be best described as a mass jaywalking.

A crowd of several dozen walked back and forth across the avenue, mostly while the light was green but lingering when it turned red; others crossed whenever they wanted. About a dozen police officers haplessly tried to keep the intersection open but the jaywalkers maintained a sort of plausible deniability – they were just crossing the street! The whole scene was festive, with the walkers laughing and filming it all on their phones. One man circulated, selling bags of popcorn and vuvuzela noisemakers. There was a whiff of marijuana in the air.

One sixty-something onlooker in a leather jacket, spotting a foreigner, approached to laud the young people's protest. “When you have a protest in the West, there are always burnt cars and destruction in the end,” he said. “Here we protest normally, and don't offend anyone!”

The mood shifted, however, when one car – a white Lada Niva with the sort of license plates that suggested official connections – revved its engine and sped toward the crowd. It didn't hit anyone, but soon after a contingent of red-bereted special police units arrived and began to roughly haul some of the more active jaywalkers into paddy wagons. “Shame,” someone in the crowd shouted. “Why are you here and not on the border with Azerbaijan!”

This reporter saw at least ten detentions at the scene. As of 6 p.m., Yerevan police announced that 233 people were detained during the day across the city, more than double than the day before.

Meanwhile, the crowd at the nightly rally that takes place on Republic Square seemed twice the size it was only yesterday.

Still, much of the city was untouched by the protests, and its many cafes as lively as ever. “Probably 80 percent of the population supports the protests, but most people are afraid to go,” said one taxi driver, who asked not to be named. The driver said he had debts of about $10,000 and had to make monthly payments to the bank. “If I get arrested and can't work, the interest rates are so high. I can't do it,” he said. “And there are so many people like me, or who work for the government and are afraid they'll get fired. This is why you see so many young people out there – they have nothing to lose.”

As for the man at the center of attention, he kept a low profile. The embattled Sargsyan met with two senior church leaders, Karekin II, Supreme Patriarch and Catholicos of All Armenians, and Aram I, Catholicos of the Great House of Cilicia. Among the topics of discussion were the protests, which the two senior clergymen clearly disdained.

“We are praying that the situation calms down so that people could be back to creative work aimed at strengthening the security of our country,” Aram said, according to a press release from the prime minister's office. “Yes, people are facing difficulties in their daily lives, but there are also many threats and challenges that we can only defy through cohesion and unity.”

The two clerics also reportedly wished Sargsyan “fortitude, strength, patience and endurance.” He will need it.