Armenia Recognizes IS Massacres of Yezidis as Genocide

Yezidis increasingly seek to highlight their shared history of suffering with Armenians. 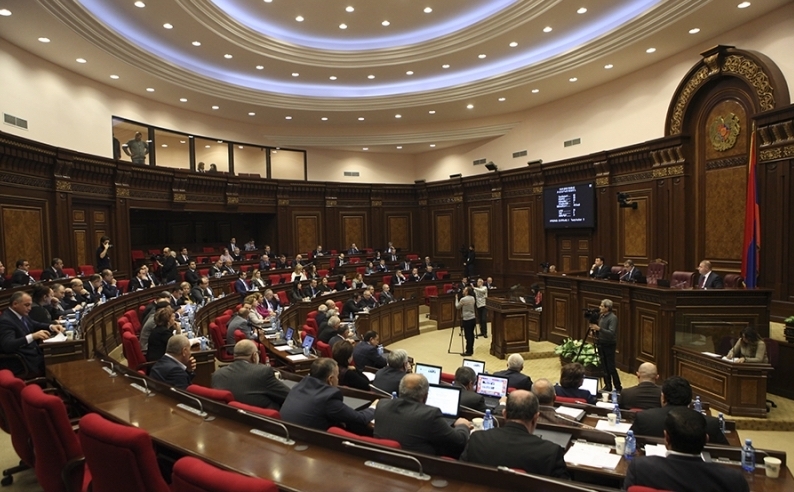 Armenia's parliament debates recognizing the massacres of Yezidis in Iraq as a genocide. The assembly passed the measure with no votes against. (photo: parliament.am)

Armenia’s parliament has passed a resolution recognising the Islamic State’s massacres of Yezidis in Iraq as an act of genocide. The statement, passed on 16 January, reaffirms Armenia’s commitment to preventing the crime of genocide, calling on the international community to investigate the terrorist group’s crimes against the beleaguered ethnoreligious group in Iraq and to ensure its safety.

In August 2014, Islamic State fighters descended on Yezidi-populated areas of northern Iraq, slaughtering some 3,000 Yezidi men and abducting 5,000 women and children. Thousands of Yezidis fled, and remained stranded in the desolate Sinjar Mountains as the Islamic State continued to systematically eradicate religious minorities across Iraq and Syria. Thousands more Yezidis joined other refugees and headed to Europe.

Among those who witnessed the events was prominent Yezidi human rights activist Nadia Murad, who herself escaped IS captivity in 2014. Murad has welcomed Armenia’s initiative and described the recognition as a “historic moment”.

The fate of the Yezidi community is of particular relevance to Yerevan -- of the world’s 1.5 million Yezidis, 35,000 live in Armenia, where they constitute the country’s largest ethnic minority. The community mostly raises livestock, and is distributed across the central and northwestern provinces of Armavir, Ararat, Aragatsotn, and Kotayk. Events in their historic Mesopotamian homeland have compelled Armenia’s Yezidis to assert themselves internationally -- in 2015, work began on the world’s largest Yezidi temple in Aknalich, a small village near the Turkish border.

Only a handful of Yezidi victims of ISIS ever made it to Armenia, where the Yezidi population are themselves the descendants of refugees from earlier massacres. In recent years, Armenia’s Yezidis have sought to highlight their shared history of suffering at the hands of the Ottoman Turks with the ethnic Armenian majority.

Rustam Makhmudyan, an ethnic Yezidi member of Armenia’s parliament, said that Armenia had a historic duty to offer solidarity to those suffering as Armenians once had, in an interview with Tert.am. Makhmudyan co-authored the draft statement in a cross-party initiative with MPs Vahram Baghdasaryan and Armen Rustamyan.

The resolution was not passed without controversy. All told, 92 members of Armenia’s 105-member strong National Assembly were present for the vote, and all supported it with the exception of Armen Ashotyan, who abstained. Ashotyan took issue with the use of the term “genocide”, a crime he argued can be committed only committed by states, not terrorist groups.

Boris Murazi, a Yezidi youth leader of the Sinjar Yezidi Union (and author of a book on the Yezidi genocide), responded in a column for A+1 news, arguing that Ashotyan’s skepticism was a symptom of a deeper intransigence among Armenia’s Republican Party -- why, asked Murazi, had it taken four years since the massacres at Sinjar for Armenia to take this latest step?

A further dispute arose when co-author Armen Rustamyan took issue with the use of the term “genocidal acts” instead of “genocide” (Arm: tseghaspanut’yun) to describe the massacres of Yezidis in Iraq. Makhmudyan responded that there was no substantive difference in international law.

The recognition of Islamic State’s massacres as genocide was one of Makhmudyan’s stated priorities in his inaugural speech after the parliamentary elections of April 2017. The 35-year old Makhmudyan was one of four MPs to have been elected under a parliamentary quota for the Armenia’s largest ethnic minority communities, introduced under Armenia’s new electoral code.

According to Yezidi rights NGO Yazda, some 13 parliaments and assemblies worldwide have recognised Islamic State’s massacres of Yezidis as an act of genocide, including legislatures in Canada, France, the UK, USA, and the EU. Prior to Armenia’s recognition, the latest legislature to do so was the Iraqi parliament on 18 November 2017.