The brief address event prompted political and diplomatic squabbling, but also was hailed as a landmark step for LGBTI rights in the country. 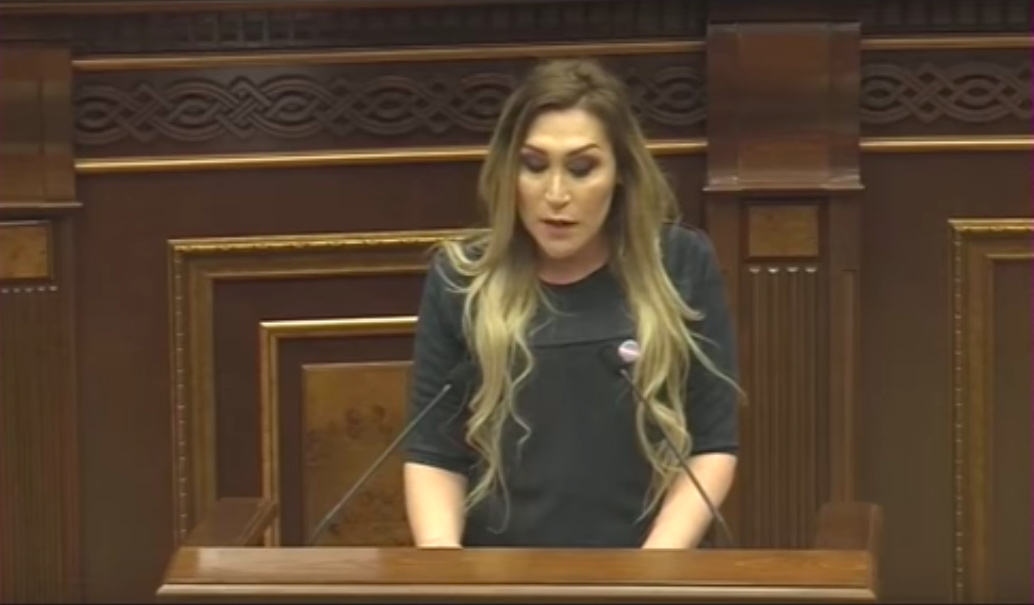 Screenshot of a video of Lilit Martirosyan, a transgender activist, addressing Armenia's parliament on April 5.

It must have taken a lot of courage for Lilit Martirosyan to walk into the parliamentary hall, stand up before lawmakers, and make history. A transgender Armenian woman giving a speech in the country’s parliament was an unprecedented event in this socially conservative part of the world.

“I stand for tortured, raped, burnt, stabbed, killed, banished, discriminated, poor and unemployed transgender people of Armenia,” Martirosyan, an activist for transgender rights, told the lawmakers at an April 5 hearing on human rights. She went on to say that hate crimes against transgender people mostly go unpunished. “I call upon you to carry out reforms and policies to achieve gender equality, and to ensure human rights for everyone,” she said.

Predictably, the address angered some of the lawmakers.

“As the leader of the Prosperous Armenia Party, head of a family steeped in Armenian traditions and faith, I say this [transgender rights] is not going to pass,” said Gagik Tsarukyan, the head of the second-largest faction in parliament. “This is a vice and we must hide the vice as we did before.”

Three days later, a crowd gathered in front of the parliament, with a collection of religious figures and other social conservatives condemning the speech and, according to activists, threatening violence against sexual minorities. Some of the protesters even called for consecrating the parliamentary floor to cleanse it after Martirosyan’s speech.

Some clerics concluded that the episode spoke to the fact that Armenia was becoming increasingly gay. “The number of homosexuals has increased in Armenia in recent years – a consequence of aggressive propaganda and spreading of European values – and this is a matter of concern for us,” Yesay Artenyan, a priest and spokesman for Armenian Apostolic Church, told Russia’s Sputnik news network.

“The #transphobic backlash is taking place across social media as well as in public spaces in #Armenia, endangering the lives of many people and also perpetuating a climate in which such dangerous and divisive rhetoric is viewed as acceptable,” tweeted ILGA-Europe, an LGBTI rights organization. The group called on the authorities “to speak out against this transphobic hatred; on the police to ensure the safety of those being threatened; as well as on the media to avoid spreading misinformation and providing a platform for hatred.”

Such support was little in evidence, however, and the country’s government and opposition instead traded accusations that the other was promoting gay rights. Prime Minister Nikol Pashinyan noted that Martirosyan was given a new passport in 2015 – when the previous government was in power – in which she changed her previous name, Vagharshak, traditionally a man’s name, to Lilit, a woman’s name. “When I was telling them that ‘you are gay activists’ they did not believe me,” Pashinyan said, referring to the previous authorities. “They just can’t avoid that status and this is further proof.”

The EU mission in Yerevan and EU member state embassies issued a statement condemning “hate speech, including death threats directed at Ms. Lilit Martirosian, her colleagues and the LGBTI community as a whole.”

That prompted a combative response from Armenia’s Ministry of Foreign Affairs. “[O]ur international partners should demonstrate more respect and sensitivity toward the Armenian society and refrain from undue engagement in the public debate, even if they disagree with its tonality,” Anna Naghdalyan, the ministry spokesperson, said. “We would like to remind that the principle of public morality is a part of international commitments on human rights and cannot be ignored.”

Amid all of the political fighting, though, some tried to maintain the focus on the history-making event. “Growing up when and where I did, I would have never imagined that one day I would know queer Armenians who are living their lives, advocating for those who can’t, and challenging our cultural and political institutions to join us in the real world,” tweeted one diaspora Armenian under the name @lifeindiaspora. “[T]oday, I see, hear, and read your stories of resilience and hope, love and laughter, and I am happy to see how far we’ve come in this community, though that road is still riddled with difficulties.”