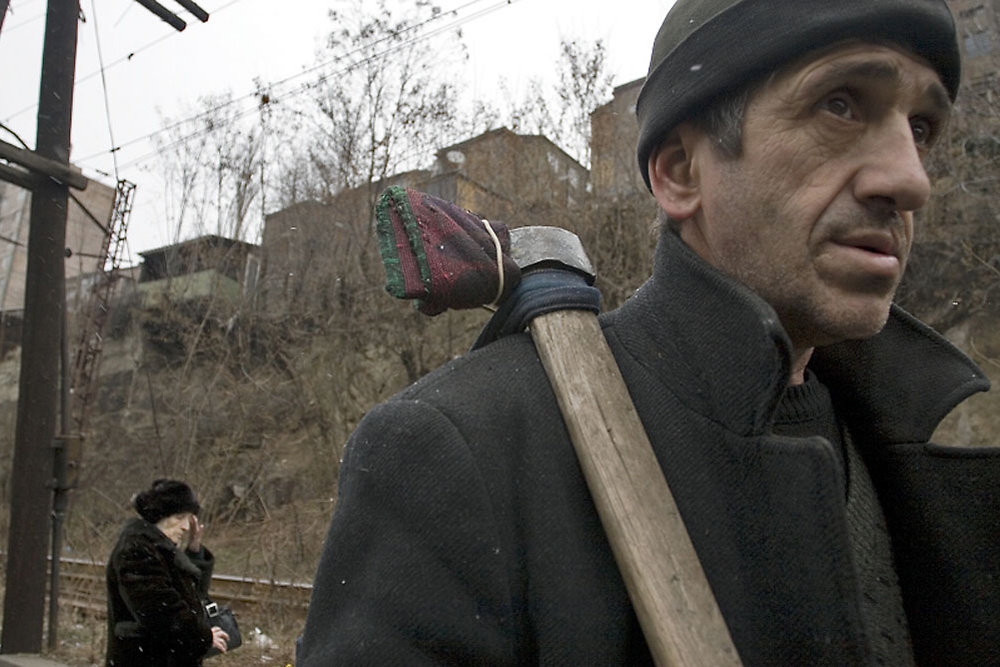 Out of work in Armenia, out of luck with Russia? (Photo: Anahit Hayrapetyan.)

Armenia’s four competitors at the Sochi Winter Olympics didn’t come close to winning a medal. But a joke making the rounds in Yerevan goes that since the athletes made it into Russia, they should at least stick around and look for work.

Russia has long been a magnet for Armenian migrant laborers. But under new Russian regulations that came into force on January 1, Armenians and other foreigners who lack long-term visas can stay in Russia for only three months before they must leave the country for another 90 days. They must remain in their home country for the same amount of time. Violators are subject to a three-year ban on entering Russia; those who have already been deported face a five-year ban.

Many Armenians expected they would be exempt from the new Russian rules, given Yerevan’s decision last September to join a Moscow-led Customs Union along with Belarus and Kazakhstan. But it hasn’t worked out that way, and many are distraught.

After agreeing to join the Customs Union, the Armenian government “told us everything would be fine, but we got into trouble,” complained 55-year-old labor migrant Vanik Smbatian, who has worked on Russian construction sites for the past 20 years to support his family. “The new law came as a beautiful surprise, like the Olympic Games, and simply spoiled our lives.”

Ninety days is not enough time to find a job in Armenia and earn money for a $350-$400 plane ticket back to Russia, migrants contend. Unofficial estimates of unemployment in Armenia soar far into the double-digits, while nearly a third of its population of roughly 3 million people lives under the poverty line.

While high unemployment has long been a problem, government data suggests that increasingly Armenians are dependent on finding jobs in Russia – in particular in construction or in service-sector jobs -- to make ends meet. According to the Central Bank of Armenia, remittances from Russia account for 84.6 percent of the overall $942 million transferred to Armenia during the first two quarters of 2013, the latest period for which data is available. The amount marks a 12-percent increase from the same period in 2012.

Similarly, according to Russia’s Federal Migration Service, 20 percent more Armenians traveled to Russia in 2013 (roughly 670,000) than in 2012. The National Statistical Service of Armenia estimates that 90 percent of those who travel to Russia go to find work there.
With reduced access to Russian jobs, many Armenian families may find themselves with no adequate means of support, local experts warn.
Against this backdrop, many want to know why Russia isn’t willing to give Armenian migrants a break. Officials in Moscow, however, aren’t offering any insight into their decision-making process.

At a February 14 news conference, Svetlana Stepanova, the migration policy officer at the Russian Embassy in Yerevan, dodged questions related to Armenia and the Customs Union. She also declined to explain why similar labor restrictions do not apply to citizens of fellow prospective Union members Belarus and Kazakhstan. “You are trying to interfere with politics again. I do not know if an exception will be made for Armenia or not,” Stepanova told journalists.

Stepanova stressed that Armenians should be sure their papers are in order before flying to Russia. The Russian government estimates that 170,000 Armenians are living in Russia illegally; Russian authorities turned away 23,000 Armenian citizens trying to enter the country in 2013.

Human rights activist Artur Sakunts, head of the Vanadzor branch of the Helsinki Civil Assembly, believes Moscow is using the new regulations as an instrument of pressure on former Soviet republics with significant numbers of migrants in Russia. Under the existing framework, Armenia is expected to complete the Customs Union accession process by January 2015. “The aim is … to force these countries to join the Customs Union, since they will lift these restrictions only in the case these states enter the Customs Union’s unified space,” he said.

Armenian leaders are already lobbying for changes. Foreign Minister Eduard Nalbandian has pledged that immigration rules will be discussed during upcoming talks about the Customs Union, and National Security Council Secretary Artur Baghdasarian has written a letter to his Russian counterpart, Nikolai Patrushev, asking that an exemption be granted for Armenia.

If no exemption is granted, the domestic consequences for Armenia could be dire, some observers predict.

For the thousands of people now left without work and who may find themselves at a dead end, the only option may be to take to the streets in mass protest, suggested political scientist Stepan Danielian, chair of the Cooperation for Democracy Center. “If there aren’t any jobs and your family is starving, then what do you do? You have to either take to the streets, or commit suicide,” he concluded.

Independent political scientist Yervand Bozoian agreed, predicting that “the numbers of protesters will significantly increase.” Already struggling with a weak economy, and persistent protests over its plans for pension reform, the government lacks the resources to defuse tensions, Bozoian noted. “The authorities must think about this and draw conclusions,” he said.