The parliament pushed through the law in an emergency session, after opposition members boycotted in protest of the government's irregular efforts to get it passed. 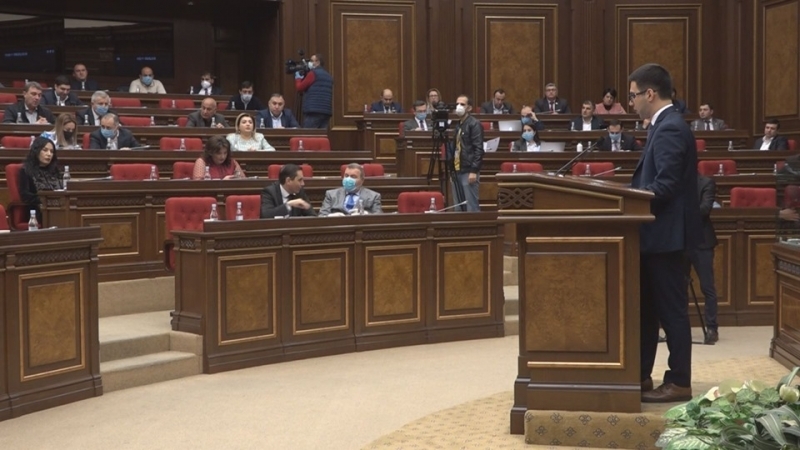 Armenia's parliament in session on March 30, when they discussed a law to use cell phones to monitor the spread of coronavirus. (photo: parliament.am)

Parliament has given Armenia’s government broad authority to track residents’ whereabouts and contacts through their telephones as a measure to slow down the spread of the novel coronavirus.

The Ministry of Justice presented a draft law on March 30 that would allow the government to collect cell phone users’ data including the location, the numbers they called and when the calls were made.

“Detecting phone calls of an infected person over the previous 14 days by matching it up with location data would be very helpful in the fight” against the virus, Justice Minister Rustam Badasyan wrote in a Facebook post. Armenia has been the hardest-hit country in the region by coronavirus, registering 532 cases as of March 31.

To the surprise of many observers, the bill failed on its second reading on March 31, getting only 65 of the 67 votes it needed for passage. Only members of the majority My Step coalition voted for it, and several members were not able to attend as they were observing the elections in next-door Nagorno-Karabakh.

But the government and My Step regrouped quickly.

Just a few hours later, another emergency session was called. The same bill was reintroduced and its first reading took place without opposition parties being present. “Dear people: at 4:58 pm I got a call that an emergency session will take place at 5 pm…We had two minutes to make it to the vote,” wrote one Prosperous Armenia Party member, Arman Abovyan, on his Facebook page.

My Step, however, framed it as a derogation of the opposition's responsibility.

One majority MP, Aren Mkrtchyan, posted a photo of a half empty National Assembly, captioning it: “The contempt of the parliamentary opposition towards the citizens of Armenia at this crucial moment.”

After another second reading later that evening, parliament approved the law with the opposition boycotting.

It had passed its first reading the day before under less controversial circumstances, in spite of opposition from both opposition parties and some My Step members.

"This is a setback to democracy," Naira Zohrabyan, the head of the human rights committee and a member of the Prosperous Armenia Party, said during the debate over the measure. The surveillance effort would be “a meaningless, meaningless thing. The huge resources that you would spend to track us, spend them instead at the borders to test [for the disease] at every point of entry to Armenia.”

Others questioned how the government’s acquisition of phone users’ electronic contacts would help stem the spread of the disease.

“For me, and maybe to my colleagues, it’s not clear what that data about two people … talking to each other on the phone would give to the state,” the speaker of parliament, Ararat Mirzoyan, said.

“People can get infected in stores,” said another My Step MP, Narek Zeylanyan. “Calls are not an indication of physical contact.” (In the end, however, both Mirzoyan and Zeylanyan voted for the measure.)

The leader of another opposition faction, Edmon Marukyan, said that parliament was doing more to spread the disease, by gathering 132 lawmakers in a closed space, than it was to prevent it via the law.  He later pointedly tweeted a photo of himself reading a copy of George Orwell’s 1984.

The government tried to play down claims that the collection of information would be an overreach.

“The information regarding the end of the calls won’t be collected. All data will be destroyed no later than a month after the state of emergency is revoked,” Badasyan said in parliament on March 31.

He said versions of the surveillance technique had already been used successfully by other countries including South Korea, Israel, and China. Armenia would be the first country in the Caucasus or Central Asia to take such an approach, it appears.

Many information technology and human rights experts were skeptical of the government’s approach.

The law “doesn’t correspond to the principles of human rights and freedoms,” human rights activist Artur Sakunts told the news website Caucasian Knot. “Limiting movement is enough of a preventative measure to fight the coronavirus epidemic, so the law will be absolutely ineffective. It’s an absurd initiative which will lead to a weakening of the government’s legitimacy.”

One prominent IT analyst, Samvel Martirosyan, wrote on Facebook that it is unclear how the collected data would improve the quarantining process. “On the other hand this is a great tool for political control,” he wrote. “We need to establish public control of the data collection and its eventual deletion. We should not rely on the good will of the government in this matter.”

Мartirosyan said that some countries that have used phone surveillance as a counter-coronavirus tool have taken more safeguards than Armenia appears to have. “Who will collect [the data] - do they have the capacity to securely handle the data? We don’t have an experience of doing that so far,” he told Eurasianet. “Also, it is important to note that in Germany, for example, they collect the data on people’s location, but it is anonymous. They just know a certain amount of people are located in one place.”

Also causing some intrigue in Armenia was the March 24 statement by one government official – Suren Krmoyan, an adviser to Deputy Prime Minister Tigran Avinyan – that Armenia had adapted from Iran a voluntary app to help citizens determine if they have coronavirus. The Iranian version turned out to track all users’ geolocation in real time and report it to the government.

“The first scenario could be that the government just cloned the Iranian app, and the data is being collected but not used,” Martirosyan said. “Another scenario is if the government is getting access to your data, the last and the ‘funniest’ is that Iran is getting the data.”

Note: This story was updated on the morning of April 1 to include developments from the previous evening.