Many observers disapprove. “Being a journalist is a difficult thing, being an MP is a very easy thing,” one wrote. 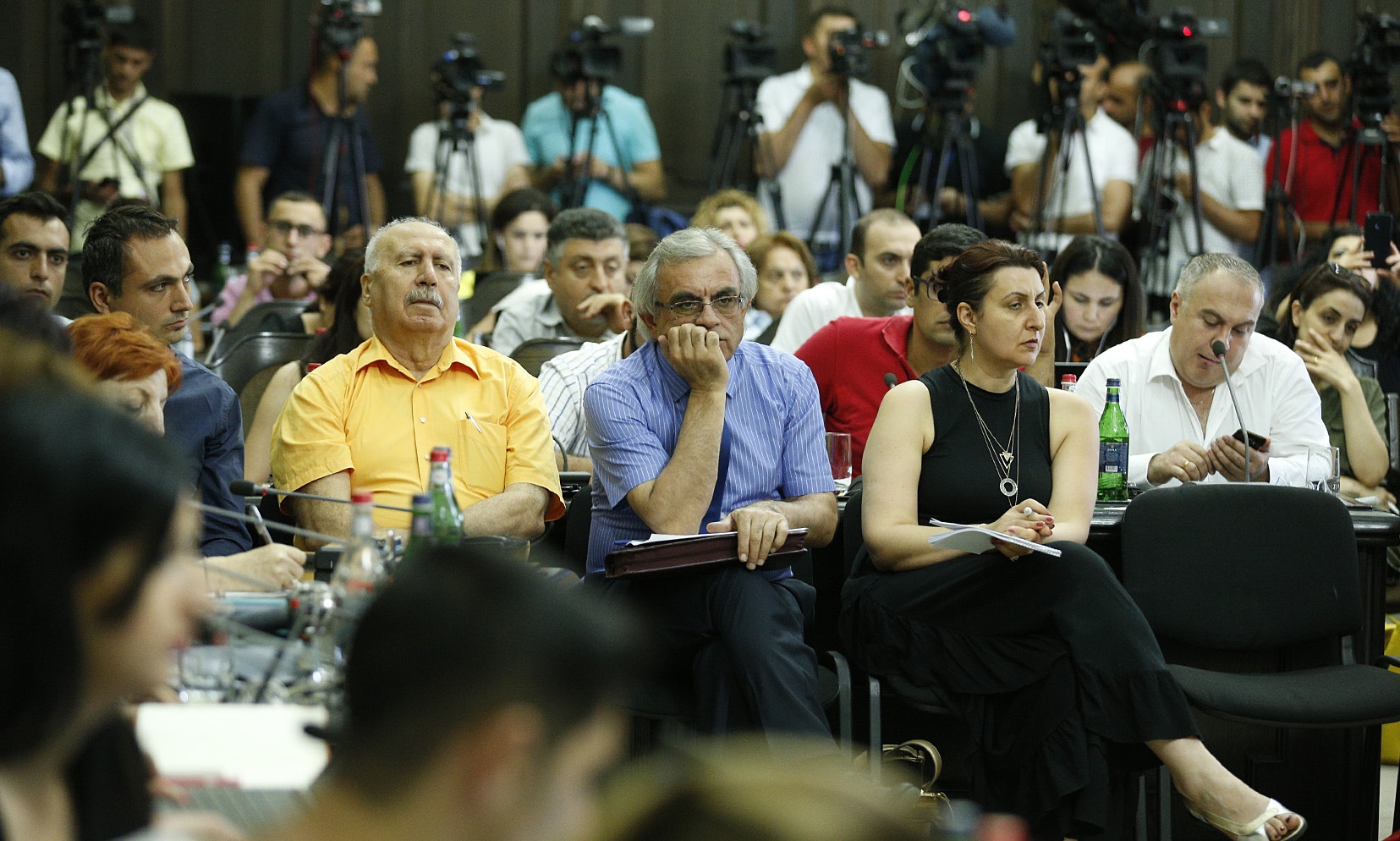 A July press conference given by Armenian Prime Minister Nikol Pashinyan. Many journalists are now moving to the other side of the microphone and are running for parliament. (photo: primeminister.am)

Armenia’s political parties have released their official lists of candidates for upcoming parliamentary elections, and the would-be MPs include an unprecedented number of journalists.

At least six currently active journalists are on the various party lists, which were released on November 14. Of them, four are running in the My Step alliance of Prime Minister Nikol Pashinyan, himself a former journalist and newspaper editor whose wife continues to work as the editor of a popular newspaper.

One of the new journalists-turned-politicians is Taguhi Tovmasyan, editor-in-chief of the newspaper Zhoghovurd. “Because Pashinyan was a journalist and due to a revolution made the transition to prime minister, journalists are enthusiastic to get into politics, taking his example of success,” she wrote in a Facebook post. “Journalists love reading and parliament will only benefit from that skill,” she added. “From now on MPs will read laws before voting for them.”

One journalist from the U.S. government-funded Radio Free Europe/Radio Liberty is also on the My Step list, Sisak Gabrielyan, who just the week previous rolled out a new political show. One of Gabrielyan’s former RFE/RL colleagues, Hovhannes Movsisyan, is already in government as head of the government "Information and Analytical Center," a state public-relations body.

Vahagn Tevosyan, head of the public television network’s news and analytical programs, also is on the My Step list.

One of Eurasianet’s former correspondents from Armenia, Gayane Abrahamyan, is also in government: She is currently a member of the Yerevan City Council and is also on the My Step list for parliament. She was one of the first wave of journalists to be swept into government after Pashinyan took power in the spring; others included Arsen Kharatyan, the editor of Georgian-Armenian website Aliq, who became a foreign policy adviser to Pashinyan; Zaruhi Mejlumyan, formerly of the investigative news website Hetq who joined the government anti-corruption agency; Aren Mkrtchyan, a writer for an online political satire program who became an anti-corruption adviser to Pashinyan; Sargis Khandanyan, a political reporter for the news site CivilNet who is now Pashinyan’s deputy chief of staff; Armen Ghazaryan, a reporter for Armenpress who is now is head of the migration service; and Gevorg Loretsyan, a reporter for the sports news site vivaronews.am, who is now deputy minister of sports and youth affairs.

This second wave of journalists running for parliament was widely commented on in Armenian social media, and many disapproved of the trend.

Hovik Afyan, host of a political satire program on Ararat TV, titled his most recent program “Journalism is dying, long live politics.” In the program, he suggested that the jump into politics makes it difficult to trust journalists’ previous work. “I wish good luck to those journalists who are running in the elections and who are now in their minds decorating their offices in the National Assembly,” he said. “I love all the journalists who are not getting into politics because it’s a sin to abandon the truth.”

One veteran journalist and host of a political program on public television, Armen Dulyan, also expressed regret. “Journalists are moving from a very difficult place to a very easy one, and it’s natural,” he wrote on Facebook. “Being a journalist is a difficult thing, being an MP is a very easy thing.”

It's not only Pashinyan’s party that is set to pick up journalists. Gegham Manukyan, head of Yerkir media TV news program, will be nominated by Armenian Revolutionary Federation-Dashnaksutyun. The former editor-in-chief of the newspaper Past, Varuzhan Babajanyan, is on the list for the Prosperous Armenia party. And Arman Babajanyan, editor of the newspaper Zhamanak and the news website 1in.am, will be nominated by the Bright Armenia party.

My Step also recruited Mikayel Zolyan, who was not a journalist but a political analyst and commentator prominent in Armenian and international media. “Over the past few months, I felt that in the future it will be very difficult for me to remain a neutral observer,” he wrote in a Facebook post explaining his move. “I’m convinced that this is the moment when I have to leave the status of observer and become a full member of the process, and also that there is a political force whose success will be my success as a citizen of Armenia.”