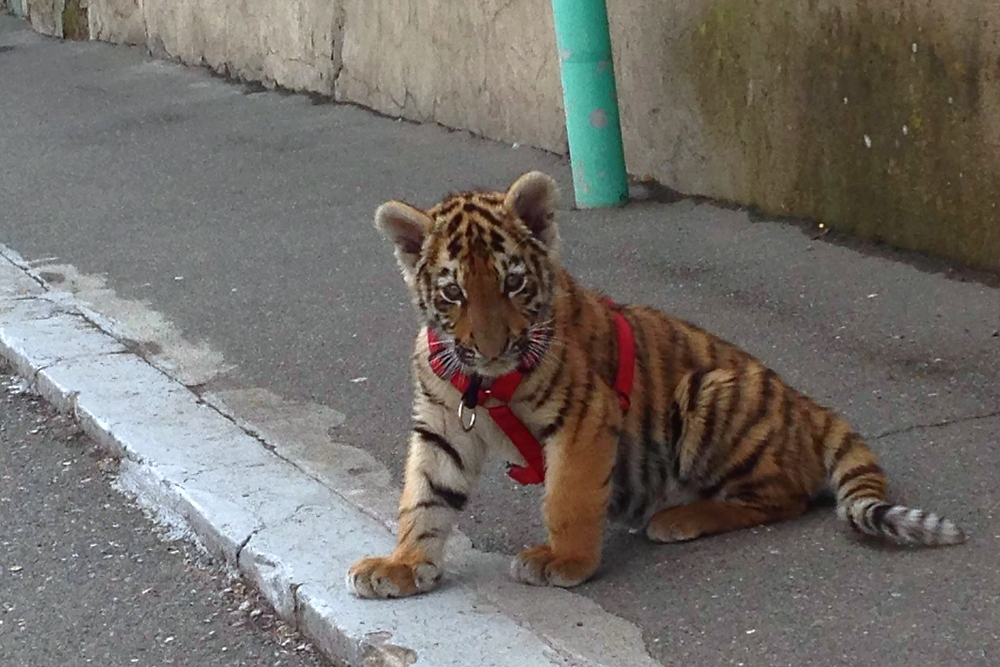 A tiger cub belonging to Manvel Grigorian, a former deputy defense minister and current member of parliament for the ruling Republican Party of Armenia, plays on a street sidewalk in Etchmiadzin in mid-November 2013. (Photo: Go Green Armenia)

The Yerevan neighbors of parliamentarian Mher Sedrakian, a member of the ruling Republican Party of Armenia, have a persistent problem with noise. But this is not about wild parties or car horns. Rather, it is about lions.

Sedrakian’s alleged collection of lions, apparently kept as personal pets, constantly roars and scares the neighborhood, and no one can get them to stop, his neighbors complained to EurasiaNet.org recently.

Increasingly, many Armenians can understand that concern. Private zoos with lions, tigers and bears are emerging as a popular hobby for the wealthy and powerful in this tiny, South-Caucasus country, and the government does not seem inclined to intervene.

Instead, recent amendments to the Law on Wildlife, passed on April 12, could facilitate this pastime. Private citizens can own wild animals, including endangered species, if they have areas for the animals that ensure their “life, health and safety,” and prevent escape from captivity, the law reads. Supervision is supposed to be “constant.”

But it is not. Last November, tiger cubs were found in the streets of Etchmiadzin, a town about 20 kilometers from the capital, Yerevan, local media reported.

Although tigers, as an endangered species, cannot be exported from the wild, their import from zoos is allowed.

A search of the Convention on International Trade in Endangered Species of Wild Fauna and Flora (CITES) database for 2008 to 2013 shows the import of six tigers to Armenia, including three Siberian tigers from Ukraine. The rest came from Belgium, Chile and Kazakhstan.

An Armenian Border Guard official, who declined to be named, explained to EurasiaNet.org that a tiger can be brought into the country if documents show its country of origin and demonstrate that it is the third generation of a zoo-based line of tigers.

A CITES certificate that authorizes the animal’s shipment is also required, said Hovhannes Mkrtchian, head of the Ministry of Agriculture’s Food Security Department, which checks import documents and verifies the animals’ health.

But investigative reports by the news site Hetq.am indicate that not all of the exotic animals imported into Armenia – namely, an endangered bonobo – end up in the CITES database.

Similarly, though crocodiles were offered for sale in Yerevan supermarkets last December for New Year’s, the database contains no mention of their import as food products.

Forty-one dumbo-eared fennec foxes, natives of the Sahara, entered Armenia between 2009 and 2010, while 21 rheas, ostrich-like birds from South America, made the trip in 2012.

Whether or not these animals were meant for the Yerevan Zoo was not immediately clear.

Yerevan Zoo Director Ruben Khachatrian emphasized that his zoo is “making every effort to meet international standards,” and expressed regret that Armenia has developed a reputation for an illegal trade in wild animals.

“Because of certain persons, Armenia has a bad international image in terms of the unlawful trade in animals…” Khachatrian said. “[Individuals] can approach you at international conferences and ask with anxiety, 'What is going on in your country?'”

The government launched a criminal investigation into the import of animals to Armenia after a Hetq.am investigation, but no breakthroughs have been announced. Caution could well temper prosecutors’ questions.

Among those Armenians known to have a taste for exotic wildlife is one of the country’s most powerful political players, millionaire businessman Gagik Tsarukian, head of the opposition Prosperous Armenia Party.

A 2009 YouTube video that showed a donkey placed in a cage of lions was widely reputed to have been filmed at Tsarukian’s Yerevan residence, which contains a private zoo.

His spokesperson, Iveta Tonoian, denied any connection to the case, but has stated that Tsarukian owns about two dozen lions and white tigers, which live “in perfect conditions.”

Tsarukian is not alone in his tastes. Former Deputy Defense Minister Lieutenant General Manvel Grigorian, head of an influential organization of Karabakh-war veterans, keeps tigers, lions, bears and various birds in a private zoo in the town of Etchmiadzin.

According to Hetq.am, an allegedly toothless tiger also protects Grigorian’s Etchmiadzin house. The tiger cub found wandering in the town last year is believed to have belonged to the general, who has not responded to the allegations.

But holding any political figure to account on such a score is difficult.

The agriculture ministry’s Mkrtchian, however, maintains that “everything is done in accordance with procedures.”

“We do everything we can to ensure safety,” he said.

But it does not always work. In 2012, a lion, allegedly owned by a former police colonel, seriously injured a two-year-old child in a village not far from the Turkish border.

Environmentalist Silva Adamian, one of the few Armenian activists following this issue, argues that the Law on Wildlife simply does not work.

“Legislators should have the leverage to control the field, whereas the opposite is happening...” said Adamian.

Dining establishments throughout the country offer the meat of bears, boars and deer, all endangered in Armenia, on their menus. Bears also provide entertainment. They also can be spotted on the loose in Yerevan itself – twice within the last year.

No parliamentarian working on environmental issues could comment to EurasiaNet.org about these practices.

Civil society groups are not prepared to take up the issue either, claimed Adamian.

“The field is controlled by certain influential people, while society is so busy with other problems that it simply has no time to take an interest in these issues," she said.