If Armenians stay in Karabakh under the Azerbaijani flag, it would represent an exception to the otherwise zero-sum game of territorial control in the region. 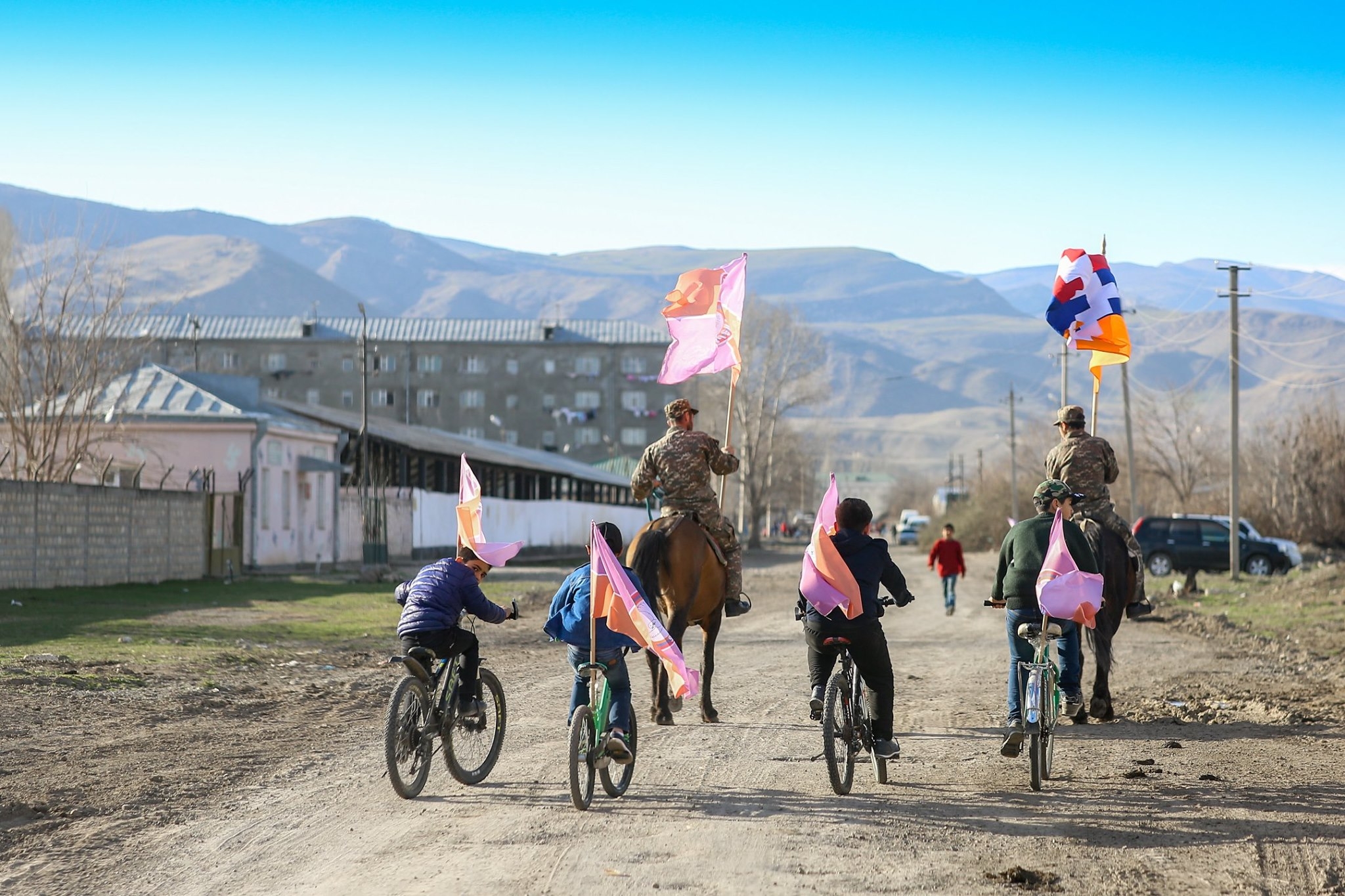 Conceding sovereignty over Karabakh would represent a dramatic turn for Yerevan. (handout)

The Armenian government is effectively conceding that Armenians will not be able to retain control of Nagorno-Karabakh, paving the way for Azerbaijan to regain full sovereignty over the territory and boding an uncertain future for the area’s current ethnic Armenian residents.

The concession has not been made explicitly, but rather via a conspicuous shift in official rhetoric from Yerevan.

After Azerbaijan in mid-March offered a new framework for resolving the conflict, which included a mutual recognition of the territorial integrity of both countries – which would in effect mean Armenia recognizing Azerbaijani sovereignty over Karabakh – Armenia said it did not object, adding only that it also expected some “guarantee of the rights and freedoms” of the Armenians living there.

“For us, the Nagorno-Karabakh conflict is not a territorial issue, but a matter of rights,” Armenian Foreign Minister Ararat Mirzoyan said.

That followed statements in recent months that were less explicit, but in the same vein, by Prime Minister Nikol Pashinyan. He has emphasized that the United Nations recognizes Karabakh as part of Azerbaijan and said the rights of the former Azerbaijani residents of the region had to be respected.

For decades, the question of Karabakh’s status – whether it would be controlled by Armenians or Azerbaijanis – has been the core sticking point between the two sides. Both sides have presented it in nearly existential terms, with what diplomats working on the issue call “mutually exclusive positions and completely contrary narratives.”

The recent shift in rhetoric amounts to a concession that Yerevan will not be able to secure a status for Karabakh outside Azerbaijan, but “in a way vague enough to be acceptable to the general public,” said one Yerevan-based analyst, speaking to Eurasianet on condition of anonymity because of the sensitivity of the subject.

Officially, Yerevan denies that it is conceding anything. “Armenia’s position is that the status of Nagorno-Karabakh should be discussed and it should consider ensuring all the rights of Armenians living in Nagorno-Karabakh,” a senior Foreign Ministry official told Eurasianet on condition of anonymity because they were not authorized to speak publicly. “Saying ‘all’ means including their right to self-determination as well.”

It’s not clear what the shift would mean for the roughly 150,000 ethnic Armenians who had been living in Karabakh since Armenian forces won control of the territory in a war in the 1990s. Until the 2020 war, in which Azerbaijan retook most of that territory, Baku had been saying it was willing to offer some sort of special autonomous status for the region as long as Armenians recognized it as Azerbaijani territory.

But following Azerbaijan’s 2020 military victory, President Ilham Aliyev immediately rescinded those promises, gloating that the ceasefire agreement ending the fighting did not contain any promises of autonomous status for the region. “The status went to hell. It failed; it was shattered to smithereens. It is not and will not be there. As long as I am president, there will be no status,” he said.

The Armenian concession of territorial control, however, seems to have been offered in the hopes that Azerbaijan will reciprocate with some kind of special rights for the Armenian population.

The specific nature of those rights is a big open question “because one of the key rights has always been self-determination. […] But if they are willing to think about that in terms other than the traditional Karabakhi-Armenian view that it means something essentially leading to independence, then there may be some room to negotiate,” one foreign diplomat familiar with the negotiations told Eurasianet on condition of anonymity.

“That [the rights of Armenians in Karabakh] continues to be the core question of the whole basket of issues that continue to divide Armenia and Azerbaijan,” the diplomat continued. “Most of them can be resolved if the issue of the future of the Armenian population could be addressed. That is the issue that started the conflict and … the issue that needs to be addressed to resolve the conflict.”

But if the two sides managed to work out a position under which Armenians would stay in Karabakh under the Azerbaijani flag, it would represent an exception to the otherwise zero-sum game of territorial control in the region. When Armenia won its war in the 1990s, every Azerbaijani living in the conquered territories fled. The same happened in the other direction when Azerbaijan won in 2020.

The rights under discussion for Karabakh’s Armenians could be cultural rights, like the ability to have schools and media in the Armenian language, said Benyamin Poghosyan, head of the Yerevan think tank Center for Political and Economic Strategic Studies. “Putting the emphasis on rights means that the Armenian government is ready to view Artsakh as part of Azerbaijan if Azerbaijan provides some rights and some autonomy,” he told Eurasianet. (Artsakh is an alternate Armenian name for Karabakh.)

One Baku-based analyst said that the government there may be interested in offering some kind of political rights as well, but would still stop short of a special status for the region.

“After the war, it seemed that returning back to the ‘90s with an administrative status for Nagorno-Karabakh would be impossible, but the government would like to offer a minimum plan like talking about cultural rights. And if there is an appetite from the local Armenians, then the discussion could turn into something bigger than cultural rights,” the analyst told Eurasianet on condition of anonymity.

But Baku is only interested in discussing the issue with Russia, which now has a 2,000-strong peacekeeping mission in the remaining Armenian-populated part of Karabakh and which Azerbaijan sees as the real power in the region. “The issue is that Azerbaijan doesn't see Armenia as a counterpart when discussing the fate of local Armenians. They see Russia as the party with whom they will discuss the future of the region,” the analyst said.

Azerbaijan’s Ministry of Foreign Affairs did not respond to a request for comment.

Conceding sovereignty over Karabakh would represent a dramatic turn from Yerevan, and particularly Pashinyan.

While Nagorno-Karabakh declared independence following the war in the 1990s, that independent status has not been recognized by any other country, including Armenia. Negotiations since then were conducted under a framework stipulating that following a peace agreement, the status of the region would be determined by the will of its people.

But for Armenians, it was anathema to think of Karabakh as being anything other than Armenian. When Pashinyan declared, in 2019, that “Artsakh is Armenia, and that is it,” it was seen as undiplomatic coming from the prime minister but nevertheless representative of how most Armenians thought. During one 2020 wartime address, he said “Without Karabakh, there is no Armenia.”

When Azerbaijan launched its attack in September 2020, Pashinyan suggested that Armenia may formally recognize Karabakh’s independence, but did not follow through.

Following the launch of the war, a concept in international law called “remedial secession” gained popularity among Armenians as a possible means of gaining recognition of Karabakh’s independence. Pashinyan himself repeatedly endorsed the idea, but according to his website, the last such mention was on June 21, 2021, at an election rally.

So what has changed?

“Their assessment of the situation on the ground,” the foreign diplomat suggested. “They saw what happened in 2020, they don’t want that to happen again, so they are looking at different options.”

Armenia also is trying to advance the process of normalization with Turkey, in which Azerbaijan is playing an outside role in influencing its ally, Turkey. “Progress on that [Armenia-Turkey] track requires progress on the other [Armenia-Azerbaijan] track as well,” the diplomat said. “They’re not explicitly [linked], but realistically there has to be some progress on both tracks for them to go forward.”

The war in Ukraine also has changed Armenia’s thinking, the Yerevan-based analyst said.

“It is becoming obvious we can’t rely on Russia. Even if Russia gets out of this [the Ukraine war] in one piece, they may try to include us in the Union State [with Belarus], or sell us out to Turkey and Azerbaijan in exchange for concessions on issues more important to Russia, like Crimea or Donbas, or something like that,” the analyst said. “So we need to find a settlement before either of those things happen, or at least we need a direct process with Azerbaijan and Turkey.”

This article has been updated to correct the description of the principle of remedial secession.