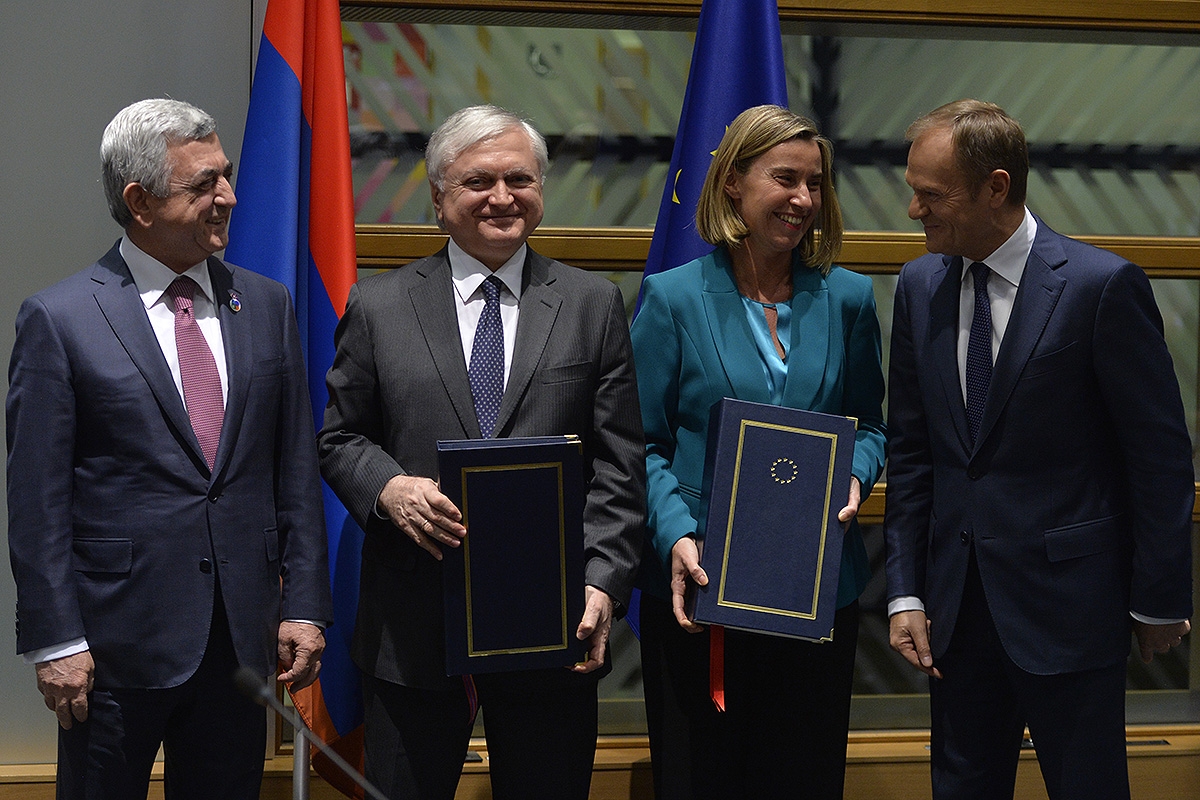 Armenia has signed a cooperation agreement with the European Union, committing to political reforms and providing some hope for Western-leaning Armenians that their country has strategic options other than Russia.

The agreement, formally known as the Comprehensive and Enhanced Partnership Agreement, was signed at a summit of the EU's summit of Eastern Partnership countries on November 24.

"This Agreement is not merely a legal document, but a reflection on the wealth of values of human rights and fundamental freedoms that we share, President Serzh Sargsyan said at the event. Armenia under Sargsyan is not known for its respect for human rights or fundamental freedoms, but he continued: "Important elements of the strengthening of democracy such as rule of law, consolidation of judiciary, development of public and social institutes, good governance ae the core of this Agreement."

The summit and signing were scheduled for months, but until the last minute some Armenians worried that Russia would somehow scuttle the deal.

That is what happened in 2013, when Armenia was set to sign a more substantial deal, the Deep and Comprehensive Free Trade Agreement, with the EU. Russia made plain its displeasure with the deal by announcing arms sales to Armenia's rival, Azerbaijan, and hinting that the price of natural gas it exports to Armenia could rise. President Serzh Sargsyan took the hint and, with no public debate, abruptly announced that he was abandoning talks on the EU deal. Subsequently, Armenia joined Russia's rival organization, the Eurasian Union.

This time around, Russia allowed the deal to go through, at least in part because the agreement was scrubbed of anything that would conflict with Armenia's obligations under the Eurasian Union.

“We develop relations with other states, particularly with Armenia, and we do it on the basis of mutual interests. At the same time, we understand that every country has its own foreign political interests, purposes, objectives and we respect them,” Russian Foreign Ministry spokeswoman Maria Zakharova said ahead of the signing.

Nevertheless, Russia did make its displeasure known, if only indirectly. Russian media played up a tenet in the EU deal that referred to the need to close Armenia's aging Metsamor nuclear power plant, suggesting it would leave Armenians in the dark. A television station affiliated with the Russian Ministry of Defense suggested that, a la Ukraine, Armenia's growing ties to the EU were inclining it to fascism.

But these were relatively feeble complaints. And both EU and Armenian officials presented the EU agreement as making Armenia a sort of bridge between the EU and the EEU.

“This ground-breaking new agreement will help demonstrate that it is possible for Armenia to be part of the Eurasian Integration Process, while also establishing an enhanced comprehensive cooperation with the European Union and this is the idea behind it and should serve as an example to others," said Commissioner for European Neighbourhood Policy and Enlargement Negotiations Johannes Hahn during an October visit to Yerevan.

While the agreement commits Armenia to reforms that hold the potential to be painful in the short term, it does move the country closer toward a substantial reward: a visa-free deal with the EU. A week before the summit the European Parliament passed a resolution recommending that the EU "open visa dialogues with Armenia."

For the day, though, Armenia's Europhiles were just celebrating. As economist Babken Der Grigorian put it, tweeting a photo of a beaming Sargsyan after the sigining ceremony: "I've never been so happy to see Serzh Sargsyan so happy."