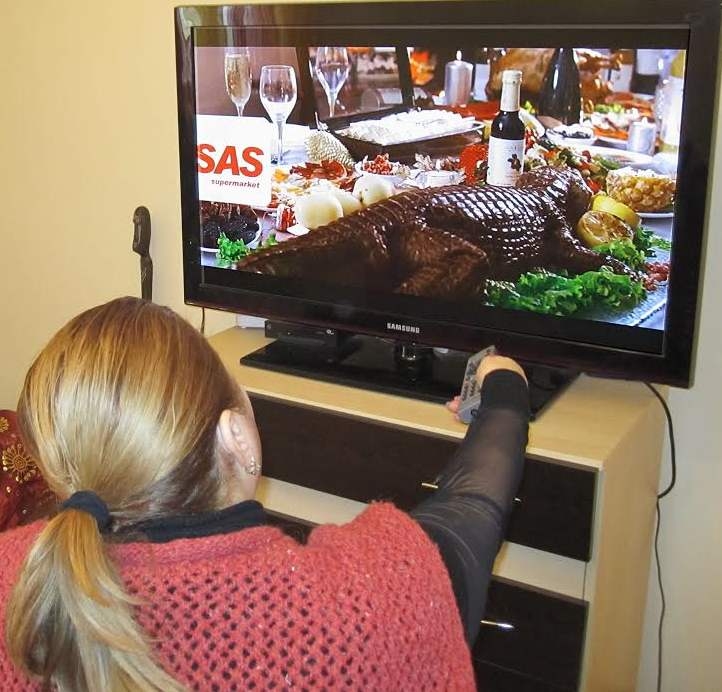 Flat chance of a smoked croc in every pot for New Year's in Armenia. (Photo: Marianna Grigoryan)

Traditionally, New Year’s in Armenia is a time for dolma, honey cake and pork legs. Not for smoked crocodile. A Yerevan supermarket’s decision to sell this “exotic delicacy” as part of its holiday offerings has added fresh bite to a debate never far from Armenia’s mainstream over the country’s yawning economic divide.
Situated on a bed of lettuce and lemons on a counter in SAS supermarket’s meat department, the 12-kilogram, 90-centimeter-long crocodile, imported from the United States, weighs in at the staggering price of 380,000 drams, or $940; roughly twice the amount of the average monthly salary. “Who can afford such luxury?” fumed 48-year-old Yerevan dressmaker Silva Alexanian. “Once the markets used to be full with people before New Year’s nowadays; now they are empty. People have either left the country, or cannot afford celebrating New Year’s. Most of them hope for the money their relatives working abroad send them.”
With roughly one-third of Armenia’s approximate population of 3 million people now officially living in poverty, for some, the crocodile symbolizes all that has gone wrong economically with this South Caucasus country since the collapse of the Soviet Union in 1991. Migration has increased by 12 percent this year, while remittances increased fivefold in the first six months of the year to $1.2 billion, according to official data.But, ironically, those very circumstances explain why a smoked crocodile is offered for sale, believes one opinion pollster.
“People live in poor conditions; they spend 85 percent of their income on food, and it is the food they strive to surprise others with” as “proof of their prosperity,” sociologist Aharon Adibekian said.
“Wealthy countries face no such competition. In other circumstances, perhaps, people would focus on quite different things.”
SAS' pricey reptile is seen as part of a larger hunger for luxurious show among the nouveaux-riches. Catering to such customers, week-long holiday vacations at various Armenian mountain resorts now out-price the cost of similar-length stays in Dubai, Thailand or Egypt, Epress.am reported.
But, in many ways, that desire for show is nothing new. In Soviet times as well, New Year’s dinner ranked as “a truly competitive sport,” according to Armenian Food: Fact, Fiction and Folklore, with “a minimum of three types of pastries,” and, for an extra splash, “candies from Moscow.”
Preparations for a traditional Armenian New Year’s meal start days in advance. Family cooks, primarily women, strive to come up with new takes on such traditional fare as pasuts dolmas (sour cabbage leaves stuffed with beans and lentils), Olivier salad (a mayonnaise-based, Soviet-era favorite, with potatoes, eggs, peas and sometimes ham), meat side-dishes such as basturma, and honey-based deserts such as baklava.
“Even if the whole world turned upside down, one should celebrate the New Year holidays,” stressed 62-year-old kindergarten teacher Anya Yenokian. “We're already up to our ears in debt, but we must celebrate the New Year properly; we don’t want to face disgrace.”
For some, though, the disgrace comes with the crocodile. “This crocodile should be the last straw in a country where many people are hardly able to provide for their daily meals . . .” complained 68-year-old Yerevan pensioner Eduard Avanesian. “It’s like mocking the people.”
“A crocodile lying on a table is like a corpse for me; the people are in the same condition,” grimly agreed 40-year-old philologist Liana Hovsepian.

SAS, a supermarket owned by ruling Republican Party of Armenia parliamentarian Artak Sarkisian, has not responded to the criticism. In 2005, it also offered shoppers a smoked crocodile, although much smaller and for the much lower price of 75,000 drams (approximately $185).
So far, the supermarket has imported only three smoked crocodiles to Yerevan, although it has pledged to supply “extra ones” for orders placed before Armenia’s January 6 Christmas.
A heavy TV promotion campaign also encourages viewers to indulge as well in black caviar and French foie gras in their bid to “be different” and lay out a “special” meal for guests.
But, ultimately, though, the bid to “be different” can only go so far. The smoked crocodile may not taste like chicken, but it does taste like fish, employees say.