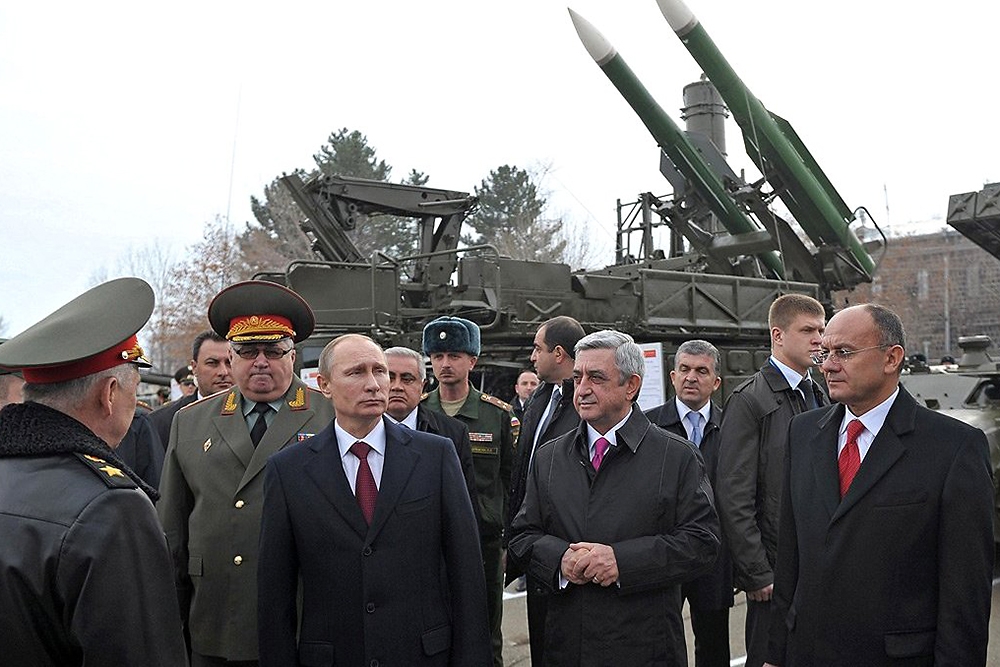 Russian President Vladimir Putin and Armenian President Serzh Sargsyan (both in center) visit the Russian 102nd military base near Gyumri, Armenia, in early December 2013. The Russian base is less than 10 kilometers from the Turkish border. (Photo: Russian Presidential Press Service)

Policymakers in Armenia are wary of the risks of the country getting caught up in deepening Russian-Turkish rancor. But some observers see opportunity for Armenia to advance its interests amid the geopolitical falling out.

Russian-Turkish relations have rapidly deteriorated since Turkish jets downed a Russian Su-24M fighter in late November. The spat has broad ramifications for Armenia: deep feelings of distrust and hostility mark Yerevan’s own relationship with Turkey, which borders Armenia to the west. Meanwhile, Armenia has traditionally seen Russia as the nation’s protector and strategic ally.

Speculation about Armenia potentially becoming drawn into the Russian-Turkish feud often touches on the Russian military base at the Armenian town of Gyumri. The facility sits less than 10 kilometers from the Turkish border.

While former Armenian Defense Minister Vagharshak Harutiunian (1999-2000) doubts that the existing rancor will spark armed conflict between Russia and Turkey, he predicted that “it will have a significant impact on the entire region of the South Caucasus, where Moscow’s and Ankara’s interests cross.”

The rising temperature in Russian-Turkish relations in particular could alter the dynamics of the long-stalemated Nagorno-Karabakh conflict. Karabakh could provide Turkey with an opening to exert pressure on Russia, said Harutiunian, who served as defense minister after the signing of a Karabakh ceasefire agreement in 1994.

“Turkey is likely to open another front against Russia by using Azerbaijan to destabilize the situation on the frontline of the Karabakh conflict – the current buildup of tensions, clashes and sabotage attempts demonstrates that it is already happening,” Harutiunian said.

Over the past three years, ceasefire violations have skyrocketed to their highest level since full-scale fighting ended in 1994. Armenia’s Defense Ministry reports that 41 Armenian soldiers died on the frontline in 2015; eight in the weeks immediately following Turkey’s downing of the Russian jet. Armenian defense officials claim that Azerbaijan used heavy tanks in early December 2015 for the first time since the ceasefire; such actions, they say, mean the effective end of the ceasefire agreement.

Harutiunian noted that even before the downing of Russia’s Su-24M, two Turkish military helicopters in early October violated Armenian airspace, over a section of the Armenian-Turkish border guarded by Russian troops. “This was a demonstration of their power to the Russians, although in our territory,” he said. Turkey attributed the incident to bad weather, the Hraparak newspaper reported.

Harutiunian and other observers want Armenia to remain “aloof” from the Russia-Turkey spat so as “not to become an involved party in this confrontation.”

But Russia could pull some political levers that would make it much more difficult than at present for Armenia to stay on the sidelines. For example, there is talk in Russian political circles about Moscow possibly renouncing the 1921 Treaty of Kars and Treaty of Moscow with Turkey. Those agreements gave Turkey eastern territories that were historically considered Armenian and/or populated by ethnic Armenians, including the cities of Kars and Ardahan, as well as Mount Ararat, the national symbol for Armenia.

Though modern-day Russia no longer has sovereignty over Armenia, Moscow’s renunciation of the pacts could send a powerful signal, some believe. “It cannot be ruled out that the Treaties of Kars and Moscow might get annulled and, as a consequence, Turkey might lose [its unchallenged claim to] up to 30 percent of its lands,” commented Stanislav Tarasov, director of the Moscow-based Near East-Caucasus Research Center, a non-governmental organization.

Other controversial chapters of history could be brought to bear on the present-day dispute. The Fair Russia faction submitted to the Russian parliament a draft bill on criminalizing the denial of genocide in the Ottoman Empire’s 1915-1918 massacre and deportation of hundreds of thousands of ethnic Armenians from modern-day Turkey. The bill has not yet been scheduled for a vote.

On social media platforms, such as Facebook, Armenian civil activists and users have expressed frustration about Russians attempting to co-opt such sensitive issues as weapons in their own battle with Turkey. But some Armenian experts see potential benefits for Yerevan.

Russian politicians trumpeting Armenian issues “fits into the logic of realpolitik and we have to take advantage of it,” said Vardan Voskanian, an expert in Eastern Studies at Yerevan State University.

Voskanian believes that Armenia now should push its own demands and set the bar for Russia as high as possible, namely, by recognizing the independence of Nagorno-Karabakh from Azerbaijan, criminalizing genocide denial, and supplying the Armenian military with latest-generation weapons.

“Today it has become crystal clear who Russia’s strategic partner is in the region,” he elaborated. “The Russians have finally realized that the billions of US dollars’ worth of [Russian] arms sold to Azerbaijan as ‘purely business’ can one day destroy their own aircraft…”

Russia, along with the United States and France, ostensibly oversees the moribund Karabakh peace process. The Kremlin has not expressed any official interest in recognizing the disputed territory as an independent entity. But there is a precedent for such recognition. Following Russia’s 2008 war with Georgia, the Kremlin recognized the independence of two breakaway Georgian entities – South Ossetia and Abkhazia.

Political analyst Stepan Grigorian, head of Yerevan’s Analytical Center for Globalization and Regional Cooperation, believes Armenia could use the tensions between Moscow and Ankara to secure Russian recognition of Karabakh’s independence, but cautions that Armenia should not be drawn into any “proxy war” between Turkey and Russia.

“We have to be extremely cautious under the current circumstances and not get involved,” he said. “This is not our fight.”