A new law makes it illegal to belong to a “criminal subculture” even if no specific crime has been committed. The legislation follows examples set in Georgia and Russia. 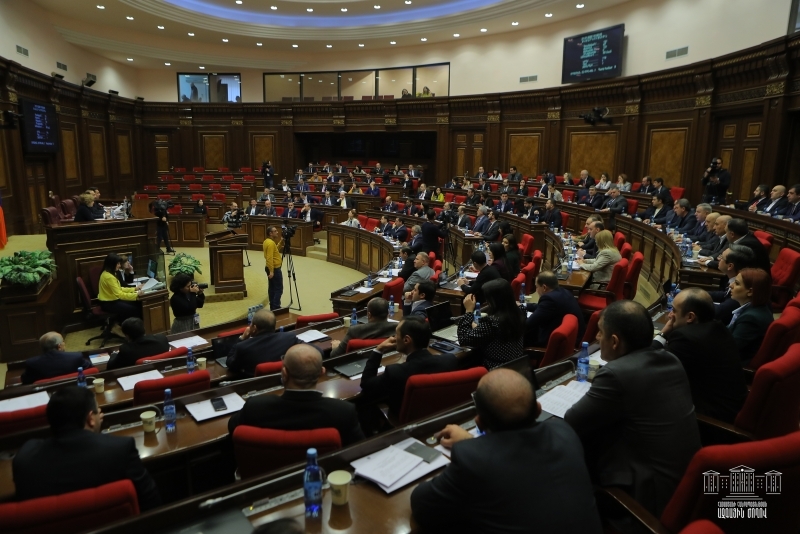 Armenia's parliament in a January 21 session, before it descended into scuffling over a law on criminal subcultures. (photo: parliament.am)

Armenia’s National Assembly has passed a law aiming to fight organized crime groups and their leaders, known in the region as “thieves in law.” Debate over the measure briefly turned the parliament chamber into an atmosphere where the thieves in law might have felt at home, with scuffles, screaming and swearing.

The bill was passed January 22 on a party-line vote: the ruling My Step faction voted for it, while MPs the Prosperous Armenia party voted against it and those from Bright Armenia abstained.

The law is modeled on similar efforts in the post-Soviet space, including in Georgia and Russia. Now, “creating or leading a criminal subculture group” in Armenia is a crime punishable by five to 10 years in prison and confiscation of assets. The definition of the group is broad, and allows members to be arrested even if they have not committed an actual crime.

As elsewhere in the region, Armenia saw an explosion of organized crime in the chaotic 1990s. And while the situation has settled somewhat, organized crime leaders are still known and feared figures in Armenia. The murder of Andranik Harutyunyan, who went by the name of "Massivtsi Andik” (referring to his Yerevan neighborhood), was one of 2019’s most widely discussed crimes.

Prime Minister Nikol Pashinyan has spoken of the need to rein in the criminal groups. At a press conference last July he complained that thieves in law are popularly thought of as honorable people, but that “people who order murders and thefts” shouldn’t be respected. “This subculture has to be taken down, a lot of problems, including political phenomena, result from this,” he said. In August, after the government approved a draft of the law, he expanded on his thoughts: “People who belong to this subculture think of prison as their home, this law will send them home,” he said. “This is a serious issue and I have to admit that our law enforcement doesn’t have the capacity to solve it.”

In November, the newspaper Past reported that a group of thieves in law were organizing a meeting in the mountain resort town of Tsakhkadzor and that one of the agenda items was going to be Pashinyan’s campaign against their culture.

They had some political support, as well: one MP from Prosperous Armenia, Vardan Ghukasyan, said in November that he “respected” thieves in law and that they shouldn’t be interfered with.

When the law came up for discussion in parliament on January 21, Prosperous Armenia again opposed it. MP Gevorg Petrosyan complained that belonging to a group shouldn’t be a crime and that the authorities should instead focus on fighting “a three-letter word,” an apparent reference to a vulgar word for sex worker.

Another MP, independent Arman Babajanyan, objected and said that the party should apologize for the remark. That led to a verbal spat, which in turn led to some pushing between Prosperous Armenia and other MPs. Speaker of parliament Ararat Mirzoyan reproached the Prosperous Armenia MPs, asking them “do you want a razborka?” using a Russian word meaning something like a showdown, a gangster means of settling a dispute. He suspended parliamentary privileges for the day for four Prosperous Armenia members.

The other opposition party in parliament, Bright Armenia, argued that the approach wouldn’t work. “This law is not capable of combating criminal subcultures because it’s going to cause legal problems in its application,” said Edmon Marukyan, the party’s leader, during the January 21 debate. “Criminal subcultures should be fought by strengthening law enforcement.”