Within “3-4 days” the country’s main infectious disease hospital should have a new 40-bed ward, the minister of health reported. 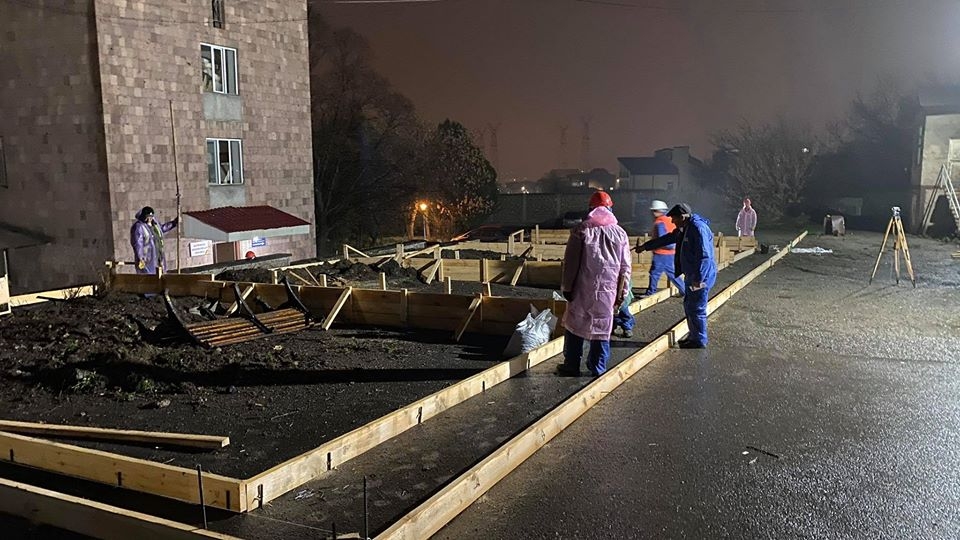 Construction of a new ward at Armenia's main infectious diseases hospital, which is supposed to be completed in 3-4 days. (photo: Facebook, Arsen Torosyan)

It’s not quite Chinese-sized, but Armenia is building a new hospital ward in a matter of days in order to handle the country’s quickly growing number of coronavirus patients.

Minister of Health Arsen Torosyan announced late March 17 that the government is building a new 40-room ward from the ground up at the Nork Infection Clinical Hospital in Yerevan. Each of the new rooms will house only one patient in isolation. “In 3-4 days we will have 40 more rooms,” Torosyan wrote on his Facebook page.

The move comes as the number of cases of the COVID-19 coronavirus are spiking in Armenia. By March 18 the country had registered 84 cases of the disease; that was up from 30 just two days before, on the day that Armenia declared a state of emergency to deal with the outbreak. One patient has recovered from the disease and no one has died. (One patient who had had a suspected case of COVID-19 died on March 17 at the Nork hospital, but the Ministry of Health reported that the cause of death was not coronavirus.)

As the state of emergency was being discussed in parliament, Prime Minister Nikol Pashinyan said that Armenia had the hospital capacity to manage coronavirus. The appropriate hospitals “can handle from 1,000 to 1,500 people,” he said. “We hope that we are not going to exceed that number.”

It's not clear if the government has rethought its capacity to deal with the outbreak, but the speedy construction reminded many Armenians of China’s construction of a 1,000-bed hospital in only two weeks in the city of Wuhan, where the outbreak originated.

Armenian officials also were scaling up the rest of their capacity to detect and treat coronavirus. Deputy Prime Minister Tigran Avinyan said that the country would “very soon” be receiving tests that could detect the disease in 15 minutes and that they mostly would be used at the international airport in Yerevan.

It's not clear how many tests Armenia currently has. On February 24, a Ministry of Health official told journalists that the country had “600 or 700 tests and we are getting 1,000 more.”

Since then, there has been no further information given about how many tests were available. According to the Ministry of Health’s most recent update, they had conducted 813 tests.

Pashinyan, in his address to parliament, said the government also was buying an additional 11 ventilators to supplement the 360 they already had.