The move comes as tensions with Azerbaijan continue to mount. But some in Armenia have objected to what they see as a further militarization of society. 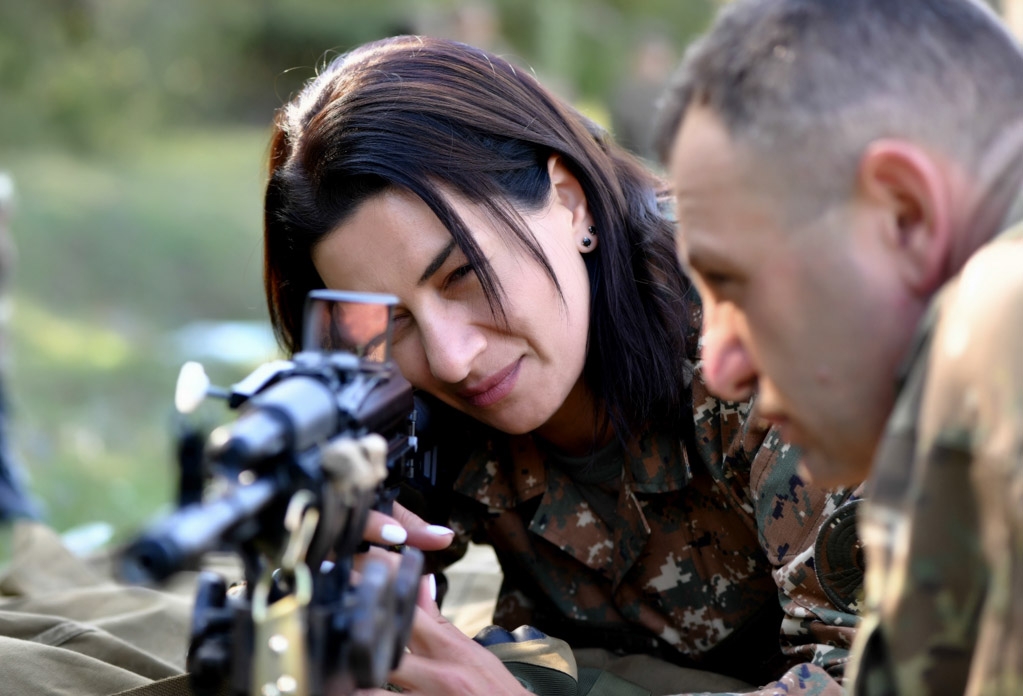 Following the heaviest fighting between Armenia and Azerbaijan in years, Armenia has proposed the formation of a nationwide voluntary militia to supplement the country’s armed forces.

The proposed militia would be open to both men and women and would accept people up to age 70. The militia units would be organized under local governments, and members wouldn’t be issued weapons except in case of military operations or the threat of operations. The militia could total up to 100,000 members.

The Ministry of Defense at the end of August introduced a draft law in parliament creating the militia, and MoD officials have expanded on the idea since then.

“In conditions of the existing and developing threats and risks around Armenia, and new belligerent statements from the neighborhood, the resources of solely the active armed forces could certainly not be sufficient,” Defense Minister Davit Tonoyan told reporters in parliament on August 28.

Whenever fighting breaks out between Armenian and Azerbaijani forces, local media is replete with reports on volunteers who want to go to the front lines and fight. That included the fighting on the Armenia-Azerbaijan border in July, the heaviest fighting between the two sides since 2016.

Deputy Minister of Defense Gabriel Balayan said that the new militia would be an attempt to systematize that process. “The July events didn’t demonstrate, but verified the need for such a structure,” Balayan told the news website civilnet.am on September 2. “It is more effective to have an organized structure.”

While tension between the two sides is the highest it’s been in many years, Balayan insisted that the decision to create a militia isn’t a response to recent events. “We are expecting war at every single moment. It is wrong to try to connect this to some anticipation of war. We have to be ready at all times,” he said. In the case of a real war, he said, “we need this number [100,000] for military support.”

An apparently unrelated program will offer a military training program to young civilian women. The women’s program was rolled out by Anna Hakobyan, a journalist, the wife of Prime Minister Nikol Pashinyan, and the initiator of a program called Women for Peace. Hakobyan announced the program on September 19; it would offer women aged 18-27 a 45-day basic training program, after which successful participants could join the regular armed forces.

To some, the new programs herald a new era of militarization in Armenia.

In 2017, the government announced the “Nation-Army Concept,” which envisaged a wide-ranging mobilization of society in the service of national security. The program was heavily promoted by the former regime, which was led by former military commanders from the war over Nagorno-Karabakh in the 1990s. But that government was toppled in 2018 by Pashinyan, a journalist with no military experience, and the concept was never implemented.

The program was controversial among some in the former opposition, as it appeared to be further militarizing a society that was already deeply militarized. The Bonn International Center for Conversion, a German peace NGO, classified Armenia as the third most militarized country in the world in 2018.

Some, however, have seen the new programs as a continuation of the former regime’s strategy.

“This is a logical continuation of the “Nation-Army Concept,” which we had thought we had drifted away from,” Edgar Khachatryan, the chairman of the NGO Peace Dialogue, told civilnet.am. “But we now see many small and big programs being implemented by the MoD under that philosophy.”

Khachatryan said that Armenia lacks the democratic institutions that could manage the risks created by the militia.

“As a result we will have a big group of people under MoD regulation but also in the shadows … It is hard to regulate a body which is under and at the same time out of MoD control,” Khachatryan said, adding that the militia will also not be subject to oversight from parliament.

In the future, it could be used for political ends, he warned.

“When democratic institutions are weak this carries big risks in terms of using military for political goals,” he said. “Now I don’t see such an intention in current authorities but when there is an institution created, mechanisms at place, this means there are no guarantees because other political powers after this one could use it.”

The human rights group Helsinki Citizens’ Assembly of Vanadzor published a report objecting to the creation of the new militia.

The idea “is a continuation of the Nation-Army Concept proposed under the former government, which in its essence was aimed at the militarization of the entire population of the state,” the authors wrote. “We have repeatedly spoken about the need to establish a professional army, when the state will solve the problem of defense and security of the country by involving citizens for whom the military profession is their main occupation, and instead, now an attempt is being made to turn the entire population into soldiers.”

MoD officials have dismissed such concerns. “This is not a militarization; it is bringing the public and army closer,” Balayan said at a September 1 press conference.

“Citizens will not be freely provided with weapons,” Balayan said. “We plan for their involvement to take place only under the conditions of military operations and military threat. Weapons will be distributed to the militia members only when military operations start in a specific place or if there is a threat of that happening. It doesn’t mean that armed people will be walking around the city.”

Other analysts said the move was justified by the ongoing threat posed by Azerbaijan.

“Many pacifists call this a militarization. I personally don’t see it,” said analyst Sosi Tatikyan in an interview with news website factor.am. “The latest events in Tavush [the border region where the July fighting took place] once again proved that we have to be always alert and have the ability to defend ourselves.”