Armenia: Trying to Break Free of Economic Dependence on Russia? 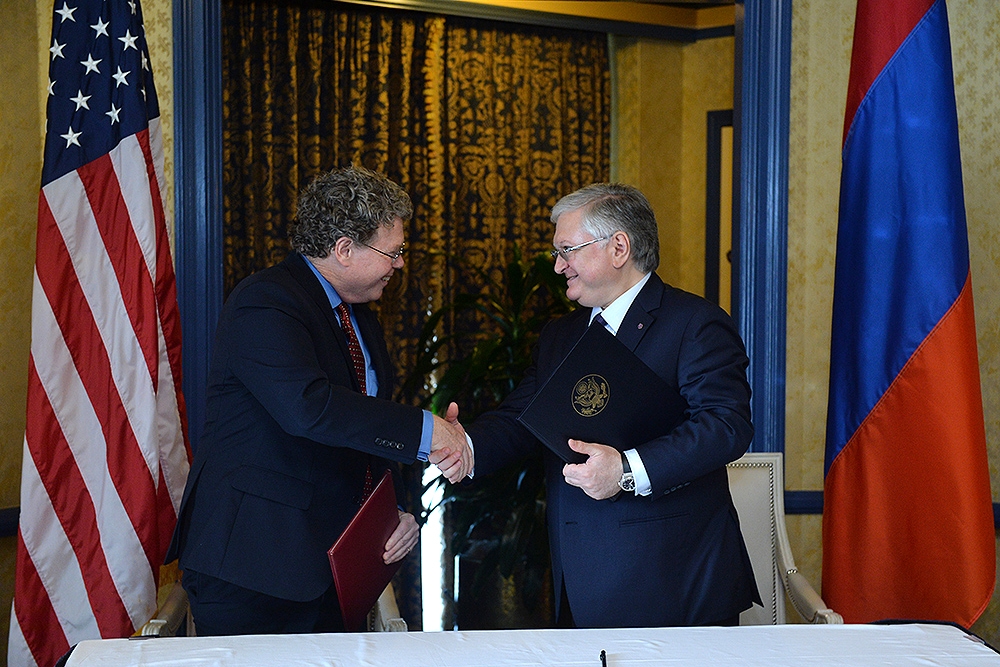 In yet another sign that Armenia is regretting joining the Russia-led Eurasian Economic Union, officials in Yerevan are playing up a trade pact with the United States.

The Trade and Investment Framework Agreement (TIFA), signed in Washington, DC, on May 7, strives to create “favorable conditions for investments and trade between the two countries.” An Armenian-American Council of Trade and Investment will be set up to work on ways to implement the goals outlined in the pact.

“The agreement at this point can … create opportunities for serious investments and changes,” claimed Manvel Sargsian, director of the Armenian Center for National and International Studies, a pro-Western think-tank in Yerevan.

The significance of the deal remains a matter of conjecture. The United States presently does not rank as a particularly important trade partner for Armenia. In 2014, at $220.9 million, it accounted for a mere 4.6 percent of the South Caucasus country’s overall foreign trade, according to data from Armenia’s National Statistics Service. That number, in fact, decreased by 2.5 percent compared with the preceding year.

The paltry trade numbers prompt some Armenian analysts to see the TIFA as a political move more than an economic one. Political analyst Aghasi Yenokian, head of the Armenian Center of Political and International Relations, said time will be needed to judge TIFA’s impact.

“This was more of a political step, a declaration of political intentions,” Yenokian surmised. “Armenia tries to show that it is not limited [in its options], but is in search of partners.”

Russia long has been seen as the mainstay of the Armenian economy: Russian firms largely control the country’s energy, telecommunications and mining sectors. At the start of the year, Yerevan acknowledged its economic dependency on Russia by joining the Kremlin-led Eurasian Economic Union (EEU) on January 1.

The timing could not have been worse for Armenia. The combination of Western economic sanctions and the plunge in the price of oil hit Russia hard, and Armenia, accordingly, suffered lots of collateral economic damage.

Tens of thousands of Armenian families rely on remittances, the bulk of which are supplied migrant laborers in Russia. The value of remittances sent home to Armenia in 2015 was 56 percent lower than the figure in April of the previous year, while imports, a reflection of purchasing power, decreased by 30.5 percent in the first three months of this year. Exports have slumped by 23.1 percent.

At the outset of 2015, the Armenian government took steps to repair economic relations with the European Union.

TIFA is merely another indicator that Armenia is trying to wriggle out from under Moscow’s thumb. “Armenia needs an alternative for breathing,” commented Armenian State University of Economics economist Ashot Yeghiazarian.

Armenian President Serzh Sargsyan, who was in Washington for the May 7 signing ceremony, voiced hope that the pact “opens new doors for successes and collaboration” in the trade sphere. Sargsyan claimed that “more than 400” American-financed companies exist in Armenia, and touched on the $250 million acquisition of three hydropower plants by ContourGlobal, a New York City-based international power-project developer. Sargsyan termed the deal the largest such US investment in Armenia’s history.

While Sargsyan may have praised the potential for growth in US-Armenian trade, he also let it be known that Yerevan is not about to abandon Russia. In a May 7 interview published by the Washington Post, Sargsyan defended his administration’s decision to walk away from an EU association agreement in order to join the EEU, describing it as a “pragmatic decision.”

“One-third of Armenia’s exports go to Russia and its partners, including agricultural products on which thousands of jobs depend,” Sargsyan said. “In addition, Russia sells natural gas to landlocked, energy-poor Armenia at quite a good price.”

Armenia’s official statistics bureau tells a different story: exports in 2014 to the EU (28.8 percent) actually surpassed those to Russia and fellow EEU members Belarus and Kazakhstan (21.4 percent). At over $437.4 million, the EU outperforms the Commonwealth of Independent States (more than $365.5 million) as a trade partner, and represents just under 30 percent of Armenia’s overall trade turnover.

Yerevan already has begun discussions with Brussels about ways to expand its ties with the EU despite its EEU membership.

Vladimir Karapetian, a member of the opposition Armenian National Congress and former foreign ministry spokesperson, downplayed TIFA’s potential. “Its main points repeat the statutory provisions of the World Trade Organization,” he said. “It is unlikely to become crucial in activating Armenia-US relations; especially considering that in the US restoring the Millennium Challenge Account, which is of vital importance to us, was not mentioned once.”

Citing a poor democratization record, Washington dropped Armenia from the Millennium Challenge program, which is designed to stimulate economic development, in 2011.