The Armenian government needed a clean vote in Karabakh for both its domestic and international agendas. But that is not how it turned out. 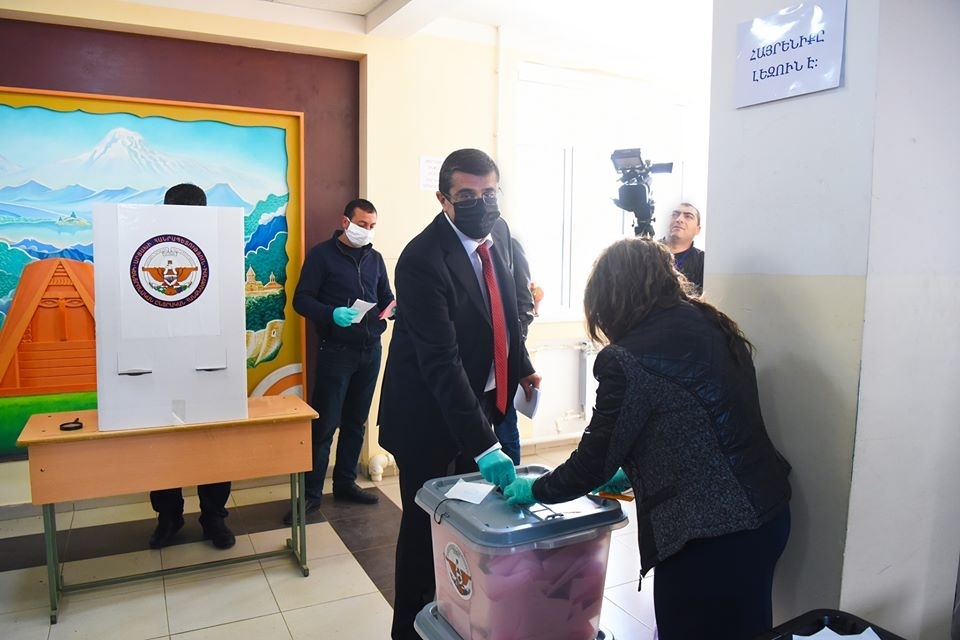 Arayik Harutyunyan votes in elections in Nagorno-Karabakh on March 31. Harutyunyan was the leading vote-getter in the race, and after the second-place finisher dropped it he is set to become the territory's de facto president. (photo: Facebook, Arayik Harutyunyan)

Armenia’s government has widely and unreservedly praised the recent elections in its next-door protectorate, Nagorno-Karabakh. But in doing so, officials have been contradicting many of their allies in Karabakh itself and the election monitors that they themselves hired.

But the rosy statements do not reflect the findings of the election observation mission that Pashinyan’s office funded. The Union of Informed Citizens (UIC), a Yerevan-based NGO that conducted the observation, issued a report that identified a number of shortcomings. Those included evidence of a large number of supporters of the leading vote-getter photographing their ballots, suggesting some sort of bribery scheme.

“For everyone here, it is quite clear that it is not a free and democratic election,” Daniel Ioannisyan, the head of UIC, told Eurasianet in a telephone interview from Stepanakert.

Ioannisyan said that Yerevan has swept the violations under the rug in order to present a positive image of Karabakh to the outside world.

“I’m afraid they couldn’t make any other statement, because of the international situation, to not have another headache of an illegitimate government in Karabakh,” Ioannisyan said. “That is the only reason they are making such statements. I’m not sure it’s the right decision, prioritizing the international reaction, but this is clearly their motivation.” (The Armenian MFA did not respond to a request for comment from Eurasianet.)

The messy vote poses a dilemma for Pashinyan. On the one hand, stamping out corruption has been at the heart of his domestic agenda since taking power in 2018. The Armenian parliamentary elections of late 2018, the first free and fair elections in the country’s recent history, are one of his government’s signal accomplishments. He then personally promised that Armenia would guarantee that these elections in Karabakh would be “free, competitive and democratic,” as well.

On the other hand, the de facto government in Karabakh plays a key role in Armenia’s efforts to resolve the long-running conflict with Azerbaijan in its favor. Karabakh is internationally recognized as part of Azerbaijan, but has been ruled by the ethnic Armenian de facto government since a war between the two sides ended in a ceasefire in 1994.

The perception of a democratically elected government in Karabakh makes it difficult for autocratic Azerbaijan to argue that it would be a better ruler. And Pashinyan has been trying to bring Karabakh back as a third party into the peace negotiations with Azerbaijan, arguing that he can not negotiate on behalf of the people who live in Karabakh since they don’t vote for him.

A cleanly run election in Karabakh would have served both of these agendas, but that is not how it turned out.

In the March 31 election for the de facto president of Karabakh, local oligarch and former prime minister Arayik Harutyunyan got 49.6 percent of the vote, beating out the territory’s current de facto foreign minister, Masis Mayilyan and setting up a runoff. Harutyunyan, a former de facto prime minister of Karabakh, still wields significant influence there and many opponents believe he used it to tip the scales in the vote.

Mayilyan announced on March 5 that he was effectively dropping out of the second round, which had been scheduled for April 14. In his statement, posted on his Facebook page, Mayilyan asked his supporters not to vote in the runoff, citing the need to prevent the spread of coronavirus.

But before Mayilyan’s statement, many observers were expecting him to contest the results of the first round. Many of his supporters have been arguing that the results were illegitimate.

“There were too many violations, falsifications and so on,” wrote Hrachya Arzumanian, a senior adviser to Mayilyan, on his Facebook page April 1. “It seems that the ‘winner’ is confident in his total impunity.”

Ioannisyan said that Mayilyan did not contest the results only out of his loyalty to Pashinyan: “He was planning to make a stronger statement, but after Pashinyan’s statement that the elections were ‘brilliant,’ he decided not to go against that.”

"If any opposition party in Artsakh [an alternate name for Karabakh] accepts and recognizes the election outcomes, this party will compromise itself in people's eyes, by reducing its reputation to zero. There were massive violations during the elections," said the head of one opposition party, Artur Osipyan, reported the news website Caucasian Knot.

It’s not clear how strongly the violations affected the result. Hrant Mikaelian, a political analyst and economist in Yerevan, conducted a statistical analysis of the vote, looking at anomalies in turnout that tend to be signs of manipulation.

Mikaelian found a pattern of anomalies that favored Harutyunyan. “This means that there was some form or other of mobilization, which could include mass voting in military units, administrative pressure, bribes to voters,” among other incentives, he wrote.

But in terms of the scale of the violations, Mikaelian compared the recent results in Karabakh to two mayoral elections in Yerevan, one in 2017 and 2018. The former, conducted before Pashinyan came to power on a mandate to eliminate corruption, saw widespread violations, while the latter – when Pashinyan was in office, were “far better conducted than in 2017,” Mikaelian wrote. The Karabakh elections, he concluded, were “somewhere between the 2017 and 2018 [Yerevan] elections, closer to the latter.”

Tigran Grigoryan, a Stepanakert-based political analyst who was running for parliament in these elections as a member of an opposition party (and did not win a seat), said that while there were widespread violations, they were nevertheless an improvement over previous votes.

“The majority of violations on election day were … connected with bribing. Voters were required to present proof that they lived up to their end of the bargain. That's why there were multiple cases of open voting and people taking pictures of their ballots,” Grigoryan told Eurasianet. “However, it's necessary to note that these were the most competitive elections in the history of [Karabakh] and there surely was some progress in terms of quality. I personally would call these elections free but not fair.”