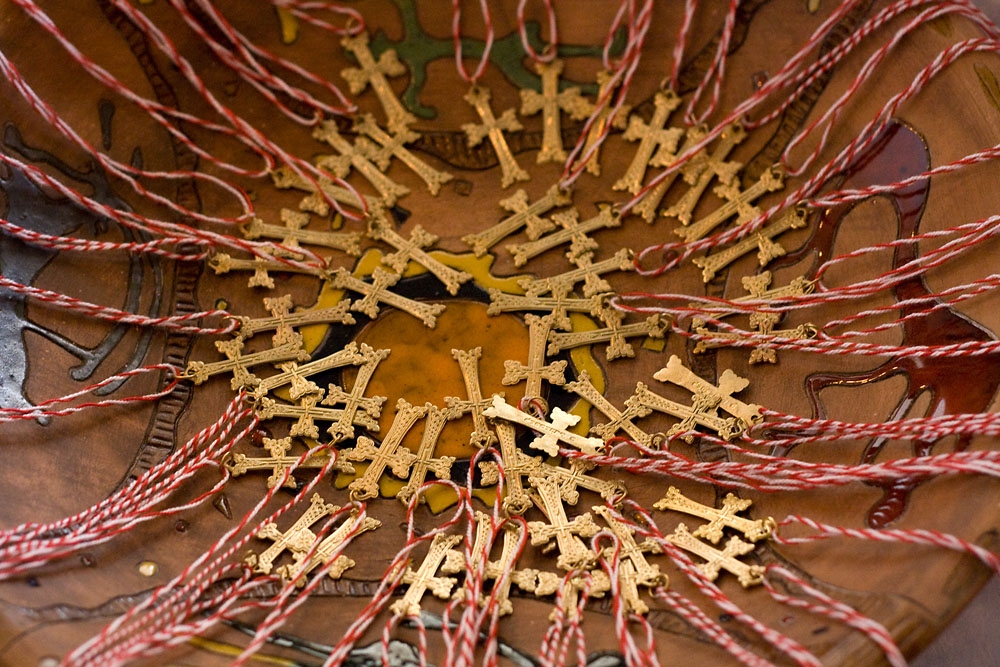 Several dozen crosses are distributed to those newly baptized after being dipped and blessed in holy water. (Photo: Keegam Shamlian)

Residents of one of Armenia’s most dilapidated villages are hoping a religious revival can improve their economic fortunes.

In early August, the town of Karakert, a churchless Armenian village founded during the 1950s to house factory workers, hosted a mass baptism. Residents, some of whom now refer to the town as “cursed,” hoped that the event could help reverse two decades of decline.

“This is a rebirth,” said Ashot Mnastkanyan, who brought his children Manvel, 13, and Ani, 11, to be baptized at Karakert’s community center. “We came here with so much joy.”

“Today, I felt like I finally became Armenian,” declared newly baptized 55-year-old Laura Manoogyan. Deacon Avedis Zargavak Zhamkochyan, one of several priests who officiated at the mass ceremony, chimed in to correct her: “You were always Armenian, but today you became a Christian.”

The economic crisis precipitated by the Soviet Union’s 1991 collapse devastated Karakert, which is located about 70 kilometers from Yerevan. Men of working age left the town in droves during the early 1990s, going abroad in search of employment. Karakert quickly gained a reputation as being one of the country’s most decrepit villages. With no spiritual center and plenty of hardship, faith among the village’s 4,426 inhabitants slackened considerably during the late 1990s and early 2000s.

But now, many locals believe that religion can help promote an economic revival. An overwhelming majority of Armenians belongs to the Armenian Apostolic Church, an institution founded in 301 and which is deeply intertwined with Armenia’s cultural fabric. Repressed during the Soviet era, the Church has experienced a modest revival over the past 20 years. Some 88 percent of Armenians surveyed by the Caucasus Resource Research Centers in 2010 described religion as either “rather important” or “very important” in their lives.

Armenia’s post-Soviet neighbors are experiencing a similar trend. In Georgia, where Patriarch Ilia II, head of the Georgian Orthodox Church, ranks as the country’s most influential public figure, a heated public debate is taking place about the Church’s role in society. Meanwhile, in heavily secular Azerbaijan, adherence to Islamic practices is gaining ground, with Muslim faithful protesting informal restrictions against Islamic head-coverings for women in public schools and universities.

The Armenian Church has come under international criticism concerning its toleration of religious minorities. The Council of Europe and Organization for Security and Cooperation in Europe currently are reviewing amendments to a draft law on religion seen as reinforcing the Armenian Apostolic Church’s dominant position to the detriment of minority rights.

In Karakert, the Church is seen as a lifeline. Bishop Sion Adamyan, who presided over the baptism ceremony, asserted that administering the sacrament obligated the Church to take an interest in the village’s social welfare. “I feel responsible for these people to whom we are showing the road to salvation,” Bishop Adamyan said.

The event was organized by a local philanthropist, Elsik Ghezlashori, with support from villagers and the Children of Armenia Fund (COAF), a New York City-based non-governmental organization that works on children’s issues in poor Armenian villages.

Despite the bishop’s enthusiasm, some locals contend that the Church as a whole has been inattentive to the plight of their village and others near it, even though its spiritual and administrative center, known as the Mother See of Holy Etchmiadzin, is located in the same province as Karakert. No plans have been announced yet to build a church in Karakert. Church officials could not be reached for comment in time for publication.

Ghezlashori believes the Church can do more to promote faith in hardscrabble towns and villages. “They need correct and nourishing spiritual understanding to help them in their struggle to stay Christian,” she said, referring to residents of economically depressed areas.