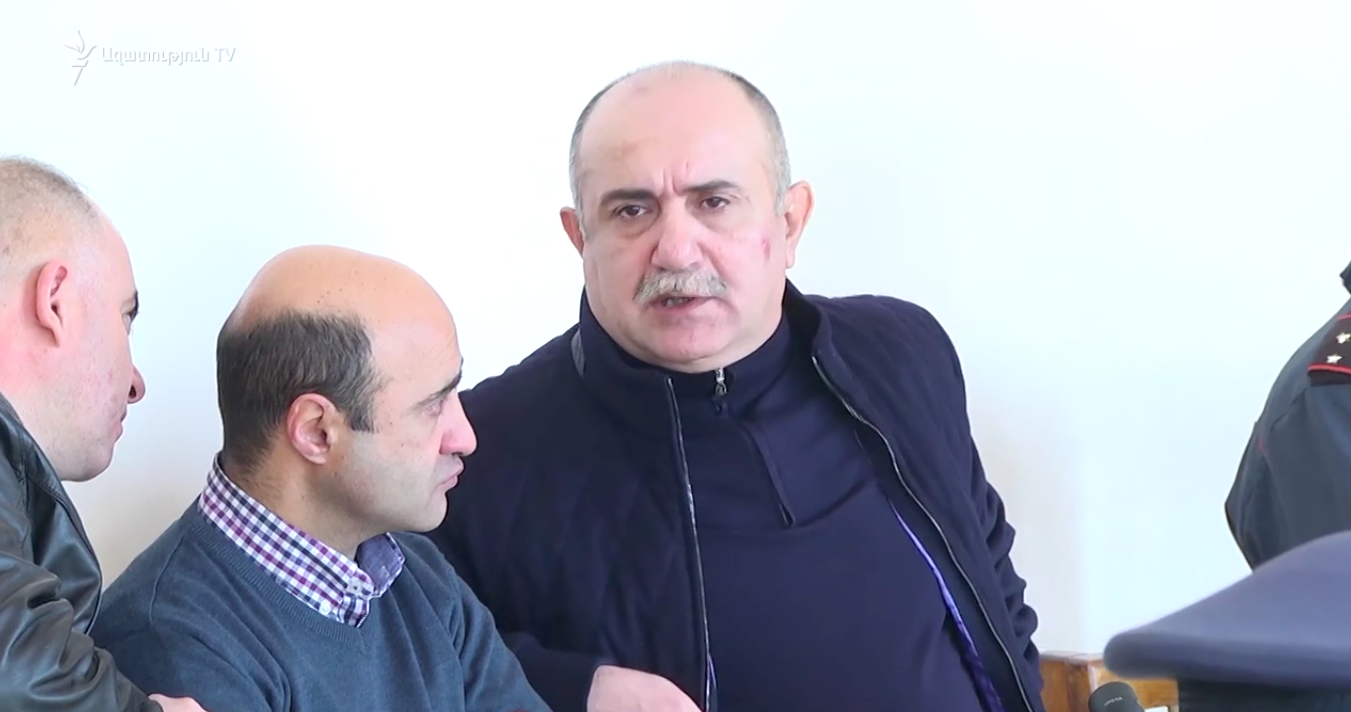 Screenshot of an RFE/RL television report from the sentencing of Samvel Babayan, a former war hero now rival of President Serzh Sargsyan, for charges of arms smuggling Babayn claims were trumped up.

On November 28, a court in Yerevan sentenced Karabakh war hero Samvel Babayan to six years in prison. Long a controversial figure, Babayan was convicted on charges of conspiring to illegally acquire a surface-to-air missile and smuggling counterfeit Euros. Babayan was arrested last March, shortly before elections in Armenia and Nagorno Karabakh, and he has been in jail since then.

Although marginalized in Yerevan politics, Babayan remains a popular figure in Nagorno Karabakh itself and the case appears to be related to the incumbent president’s effort to consolidate power ahead of April 2018 constitutional transition.

Babayan and other individuals charged in the case pled not guilty and lawyers promised to appeal. When asked by journalists if he thought the case against him was politically motivated, Babayan responded: “Only one person decides such things in this country,” implicitly blaming President Serzh Sargsyan, with whom Babayan has had hostile relations since the war. “Investigators were more interested in my politics than the weapons charges against me,” he claimed.

The case is part of the trifecta of anti-Sargsyan “armed opposition” cases that also included the November 2015 arrest of a nationalist group plotting an armed rebellion and the July 2016 uprising by a group of Karabakh war veterans that resulted in a two-week armed standoff, in which three policemen were killed. Those earlier cases may have made Sargsyan’s security officials more concerned about anti-government plots, encouraging what appears to be a preemptive move against Babayan.

From war fame to prison and exile, and back

This is Babayan's third time behind bars. In 1991, as the Karabakh conflict was becoming increasingly violent, he was a 26-year-old car mechanic in the capital of Stepanakert arrested by Soviet security forces for his role in Armenian militia groups aiming to defend Karabakh Armenians from Azerbaijani and Soviet forces. Babayan was held in prison in Baku and Shusha for about six months until some of his allies – led by his brother Karen Babayan – captured a senior Azerbaijani official. Robert Kocharyan, then a local activist for Karabakh’s unification with Armenia, helped broker a prisoner exchange.

Soon after his release, Babayan rejoined the armed struggle. In August 1992, after a series of military setbacks, Babayan sidelined Serzh Sargsyan as commander of the Karabakh Defense Army. Within months, the Armenians in Karabakh, under Babayan's command and Kocharyan’s political leadership, changed the course of the war in the Armenians' favor. In May 1994, as Karabakh commander, Babayan signed the cease-fire agreement with Azerbaijan. Sargsyan signed it for Armenia.

After the war, Babayan fell out with Kocharyan’s successor as Karabakh president, Arkady Ghukasyan. Late on March 22, 2000, Ghukasyan was ambushed near his office and was seriously wounded, but his security beat back the attackers. Babayan, his brother Karen, and others in his retinue were charged, tried and imprisoned for the attack. Babayan was also charged with embezzlement and other crimes and sentenced to 14 years in prison.

Less than five years into his prison term, however, Babayan was pardoned and left for Yerevan. There, Babayan borrowed money from his former brothers-in-arms to establish a political party and a business venture. Both flopped, and Babayan hastily absconded to Moscow. Five years later, shortly after the April 2016 war, Babayan returned to Armenia. Persistent rumors in Yerevan suggest that a powerful individual – possibly Kocharyan or Moscow billionaire Samvel Karapetyan – paid off Babayan’s Yerevan debts to make his return possible.

In June 2016, when Babayan arrived in Stepanakert after more than 16 years away, hundreds of locals came out to greet him. Local opposition MP Hayk Khanumyan called for Babayan to be appointed defense minister. Khanumyan was subsequently assaulted and beaten by government supporters and Babayan personally disavowed any political ambitions in Karabakh.

Still, speculation continues about Babayan's aims in Karabakh. Curiously, because of the constitutional changes implemented in Karabakh, in the next three years its parliament could theoretically replace incumbent president Bako Sahakyan with another candidate via a direct vote, without a national election.

Conspiracies and tug of war

Upon his return to Armenia, Babayan joined the chorus of critics of Serzh Sargsyan’s national security policy. Ahead of April 2017 elections, he aligned with a political bloc led by former defense minister Seyran Ohanyan and former foreign ministers Vartan Oskanian and Raffi Hovannisian. Babayan was arrested shortly after Ohanyan’s men clashed with a pro-Sargsyan village mayor who attempted to halt their pre-election rally. Contrary to expectations, both Babayan and the Ohanyan-led bloc chose not to politicize the arrest, and Babayan himself has so far refused to call himself a political prisoner.

Babayan also kept his distance in July 2016 when two dozen Karabakh war and army veterans took over a police base, demanding Sargsyan’s resignation and release of their leader, another prominent war-time commander Jirair Sefilian, a former ally of Babayan's.

The newest charges against Babayan, particularly the one related to the missile, echo claims made against a previous anti-Sargsyan armed opposition case. The group known as Armenian Shield was rounded up in November 2015, after allegedly seeking to foil the constitutional referendum, take over government buildings and announce Armenia’s formal unification with Karabakh. The group, which also included Armenia’s former deputy defense minister Vahan Shirkhanyan, reportedly discussed shooting down Sargsyan’s plane as part of their conspiracy, but had no missile with which to do it.

What Babayan, Sefilian and Shirkhanyan all have in common is their belief that Sargsyan is weak on Karabakh and should not be allowed to stay on as Armenia’s leader, especially after his presidential term runs out in April 2018. At this point, there are few doubts that Sargsyan would like to maintain a key role in Armenian politics and national security issues, at least as the leader of the ruling Republican Party and via a trusted ally as prime minister, such as Defense Minister Vigen Sargsyan.

The incumbent prime minister Karen Karapetyan, though, has made clear he will seek to stay on. Karapetyan is related to ex-president Kocharyan and chair of Armenia’s Constitutional Court Gagik Harutyunyan (rumored to be a top candidate for the soon-to-be-ceremonial presidency) and is also a close friend and business associate of billionaire Samvel Karapetyan. Karapetyan will not be easy to sideline.

The leadership struggle will ultimately be decided via the vote for prime minister in parliament. Arresting Babayan and others helps Sargsyan send a message to his more serious political challengers, as he seeks to maintain the cohesion of the ruling party he leads.