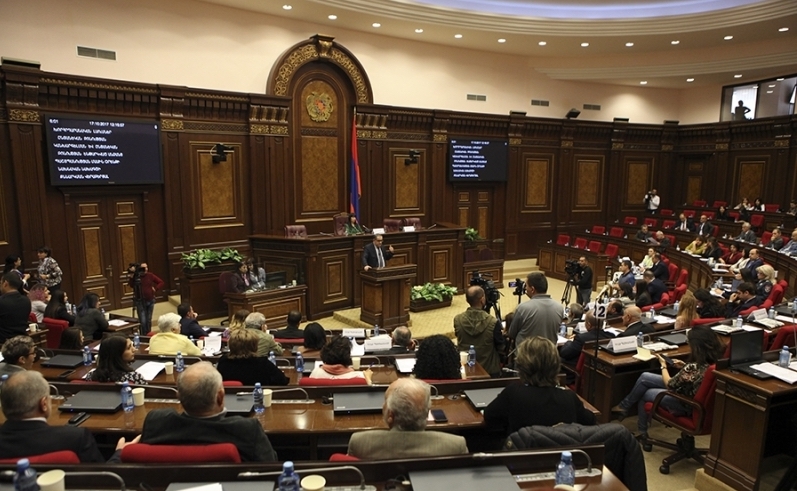 An October 17 hearing, organized by the Armenian parliament's Standing Committee on European Integration, on domestic violence legislation. Armenia's ruling party has expressed criticism of the bill, which has been backed by the European Union. (photo: parliament.am)

Armenia’s government has presented its final draft of controversial legal reforms aimed at preventing domestic violence in the country. The new package of laws substantially weakens them, critics contend, stripping them of meaningful content.

The new version of the law will be debated in parliament this week, deputy speaker Arpine Hovannisian said on November 27.

The final draft was presented by Armenian Justice Minister Davit Harutyunyan during a government meeting on November 16. The new package of laws have been somewhat euphemistically retitled “On the prevention of family violence, protection of persons subjected to family violence, and the restoration of family cohesion.” The reference to “domestic violence” in the previous bill has been removed from the title.

The final draft, posted on the government’s official website, shows that the bill has had substantial amendments since it entered public debate early last month. During the debate, officials from the ruling Republican Party of Armenia objected to some parts of the law and Justice Minister, one of the main advocates for the bill, said it could be amended but that the changes “will not be significant,”

That does not seem to have been the case, however.

At the heart of the new bill is the notion that traditional family values must be reinforced and protected.

The bill also seeks to “strengthen traditional family values,” a notion that women's rights advocates find troubling. “The approved draft ... does not question Armenian traditions — the root causes of women’s violence and oppression. Instead, it perpetuates them,” wrote Anna Nikoghosyan in a recent commentary on Open Democracy Russia.

“This law, with its title, principles and wording is not only bad, it is insulting” Lara Aharonian, a feminist activist in Yerevan, wrote on her Facebook page. “Many women […] are systematically abused, oppressed, beaten up, and killed in their house by their intimate partners in the name of tradition and so-called ‘family values.’”

“They added the title ‘a law to reconcile families’ (which is absurd!) […] to calm fears around the law which was viewed as a way to destroy families” she continued.

About 60 percent of Armenian women reported that they had suffered from domestic violence at least once in their lives, according to a 2011 survey conducted by the Organization for Security and Cooperation in Europe.

Social conservatives have been strongly opposed to the reforms from the outset, arguing that they would undermine Armenian culture and traditions. They also claim that the law is an instrument for the European Union to act like an imperial power, enforcing its own values on the country.

The laws were proposed by the EU as part of a pilot project in which it will provide 12 million euros in aid to Yerevan in exchange for implementing a series of important human rights reforms. In addition to addressing domestic violence, the reforms include banning discrimination against minorities, stronger measures to prevent torture, and improvements in the care of disabled children.

It's not clear whether this version of the law would fulfill the conditions that the EU set out for Armenia to receive the aid. The EU delegation in Yerevan did not respond to queries from EurasiaNet.