Armenia: "When You Have a Good Pigeon, You Get Great Respect"

The competitions last weeks, with each pigeon getting his or her own day to fly. 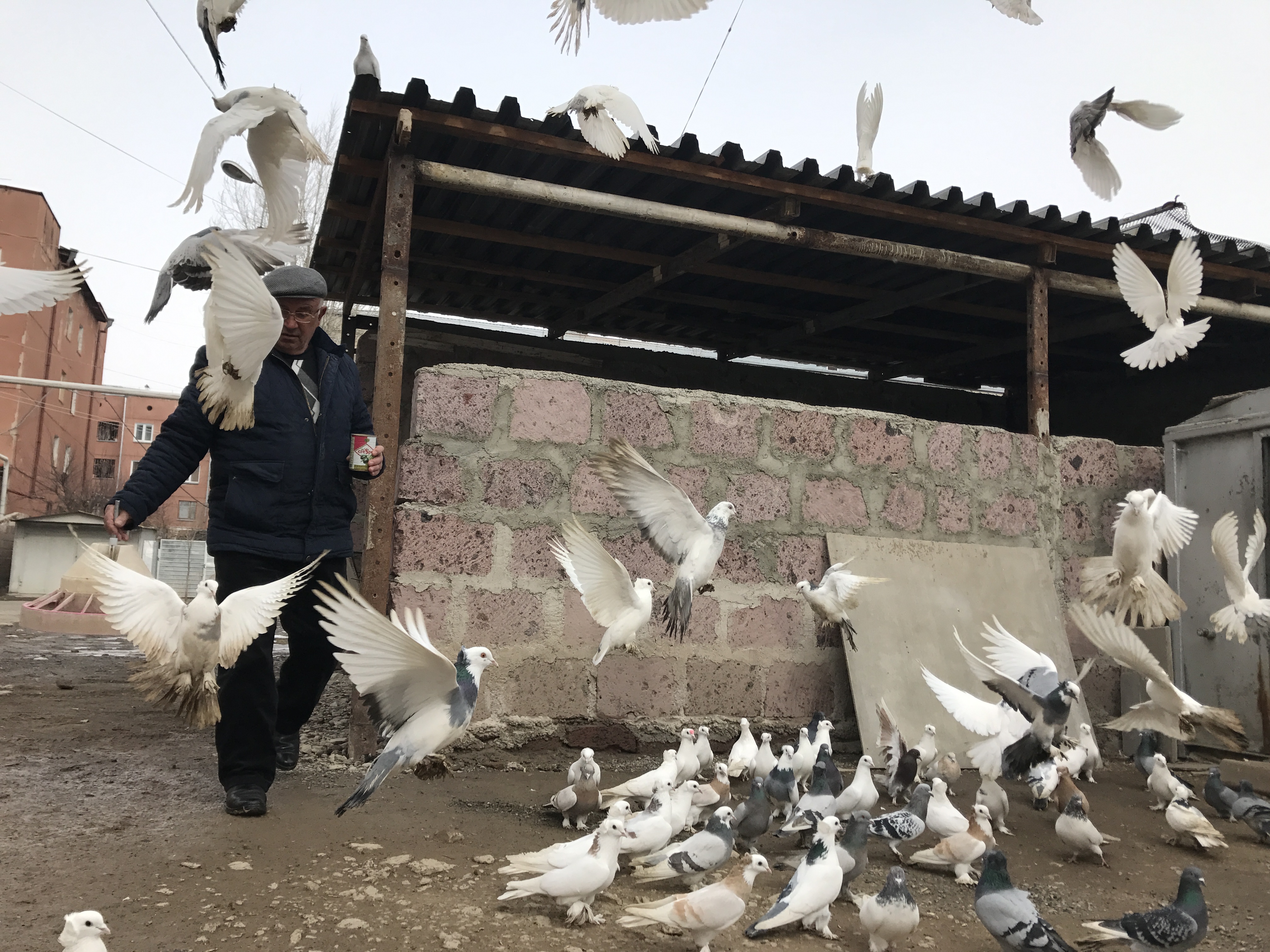 In his story “Doves,” the 19th-century writer Vahan Totovents described the lowly social standing of dove breeders in Armenia.

David Shirvanyan laughs when he recalls the famous line. “Now the attitude has changed, nobody criticizes us anymore. We are accepted by society,” says the 38-year-old dove breeder from Yerevan. “But in any case I won't let my children keep pigeons – it's like a disease, and I don't want them to live like me, everything for the sake of these birds.”

Shirvanyan has been keeping doves (a type of pigeon) since he was five years old, when he got a bird as a gift from a relative. He fell in love, and today he has 300.

He plies his trade at Yerevan's bird market, which operates on weekends, offering animals both for food and for pets.

Pigeons start at 500 drams (about $10). The top price Shirvanyan has gotten for a pigeon is $5,000, but there are some he considers priceless. Recently, he says, one buyer offered to trade a nearly new Opel Astra car for his favorite dove, but he turned the offer down.

“Even if I am offered a price of a luxury apartment in [Yerevan's elite] Northern Avenue, I will not sell it. Even if a gun is put to my head, I won't sell it. People don't believe it, but when you are connected to a dove, it becomes like your own baby,” Shirvanyan says.

Shirvanyan and the other dove breeders – known as ghushbas in Armenian – are getting ready for spring. That is dove competition season in Armenia, when ghushbases pit their best birds against one another to see which can fly the longest.

The competitions last weeks, with each pigeon getting his or her own day to fly. The prize money comes from an entry fee of $100 per bird, but that's not the main incentive, Shirvanyan says: “The money is not as important as the issue of honor: when you have a good pigeon, you get great respect.”

The Yerevan record is an 11-hour flight. If a pigeon can only stay in the sky for less than an hour, on the other hand, it's considered dishonorable and the owner gives the bird away.

Gyumri, Armenia's second city, also has pigeon competitions, but with different rules. The stakes are smaller – the entry fee for each bird is between $10 and $20 – and pigeons aren't judged by their endurance, but their ability to perform aerial tricks.

“Our city is the cultural center of Armenia, we value beauty and in this case the beauty of pigeon flight,”  says Ashot Metsoyan, a 65-year-old Gyumri ghushbas. “There are different kinds of jumps in figure skating, and our pigeons also should make similar kinds of jumps.”

Pigeons aren't only used for competition. One pagan custom, which endures to this day in Gyumri, sees the pigeon as a “pure” bird to be sacrificed upon the birth of a child, or when a family member survives an accident. Pigeons are killed by slitting their necks, then the birds are cleaned and eaten.

Pigeons are also bought for weddings across Armenia, and newly married couples traditionally release a pair of pigeons to ensure a happy, peaceful life together.

Metsoyan's grandfather was a pigeon keeper, and his son and brother took up the vocation as well. But Metsoyan himself didn't have anything to do with the birds until the devastating 1988 earthquake in Spitak, near Gyumri.

“My father, son, brother, and my brother's pregnant wife died,” Metsoyan says. “I was going mad. I wanted to commit suicide. I didn't care about anything.” One day, though, he walked out of his house and saw a nest of pigeons that appeared to be starving. “It broke my heart,” he recalls. “I decided to feed them and from that moment my life changed.”

Metsoyan estimates that out of his pension of 36,000 drams a month, he devotes about 20,000 to feeding pigeons: “I can stay hungry and thirsty, but they should have food.”

Like other ghushbases, Metsoyan says he puts love for the birds over his commercial interests.

He recalls selling one pigeon to a buyer who took the bird to Tbilisi. A few days later, the pigeon returned to Gyumri. “I called the buyer and told him to come and take his money back, as my bird doesn’t want to stay with him,” Metsoyan says.

And he points to a yellow pigeon, which he calls his favorite. “I've been promised a house, a car, a great deal of money, but I'll never sell it.”