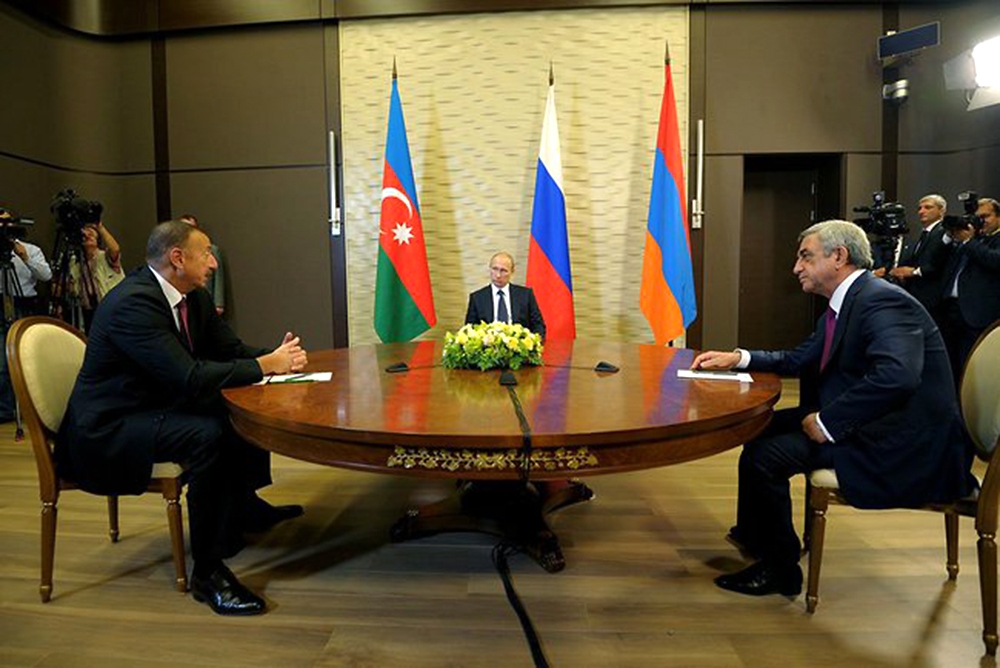 Russian President Vladimir Putin (center) tries to mediate a solution to the conflict over Nagorno-Karabakh with the presidents of Armenia, Serzh Sargsyan (right), and Azerbaijan, Ilham Aliyev, on Aug. 10 in the Russian Black Sea city of Sochi. Recent deadly clashes that occurred along the frontline featured perhaps the heaviest military fighting since the signing of a ceasefire agreement in 1994. (Photo: Russian Presidential Press Service)

Amid the recent escalation of hostilities surrounding the contested Nagorno-Karabakh territory, authorities and experts in both Armenia and Azerbaijan are engaging in the old Soviet practice of identifying the outside power that most benefits from conflict. For many in Armenia, the answer is straightforward enough – Russia.

Russia has long exerted a high degree of economic and military influence over Yerevan: that influence is underscored by Armenia’s decision to join Moscow’s Customs Union, which the Kremlin hopes will evolve into an alternative for ex-Soviet republics to the European Union. Many Armenians believe the Kremlin’s sway has reached such heights that Yerevan is now vulnerable to potential pressure from Moscow to settle the 26-year-old Karabakh conflict on terms perceived in Yerevan as unfavorable.

Seen as a troublemaker in Ukraine via its support for pro-Russian separatists, Putin’s Russia appears to be trying to style itself a peacemaker in the Caucasus. For this reason, Armenian analysts say, the August 9-10 meetings between Armenian President Serzh Sargsyan, Azerbaijani President Ilham Aliyev, and Russian President Vladimir Putin in Sochi, Russia, did not occur by chance.

Political scientist Ruben Mehrabian from Yerevan’s Center for Political and International Studies made a connection between recent events in eastern Ukraine and the Armenian-Azerbaijani standoff over Karabakh. “Russia’s actions in eastern Ukraine are prompting a tough [Western] response [especially sanctions], so [Russia] attempts to balance this out through its so-called potential for peace,” Mehrabian said. “The escalation of hostilities on the [Karabakh] border was Aliyev’s precious gift to Putin.”

He added that Moscow “did not score a goal” with the Sochi summit. Even so, the situation along the frontline has remained relatively calm since the talks.

Notably, Putin acted alone, convening the Armenian and Azerbaijani leaders without the fellow American and French co-chairs of the Organization for Security and Cooperation in Europe’s Minsk Group, the entity that ostensibly oversees the Nagorno-Karabakh.

“Russia has long held the advantage of proximity and presence over its fellow mediators, France and the United States,” noted Richard Giragosian, director of the Regional Studies Center in Yerevan. “Moscow may seek to collude, but no longer cooperate with Western interests in mediating the Karabakh conflict, and a new attempt by Moscow to push out Paris and Washington from equal footing in the mediation effort is more than likely, given the new anti-Western refrain from the Putin camp.”

There has been sniping and occasional firefights all along the so-called Karabakh contact line since the signing of a ceasefire agreement in 1994. But the clashes that occurred from July 28-August 3 featured perhaps the heaviest fighting in 20 years. According to the Armenian Defense Ministry, the recent round of fighting left 25 Azerbaijani soldiers dead and over 30 wounded, while five Armenian servicemen were killed in action and seven wounded.

In recent days, the patriotic mood has swelled in Armenia, stoking sentiment among the general public in for an all-out offensive against Azerbaijan. Some believe that Russia cannot be trusted to uphold Armenian interests in the stalemated peace process and Armenia must remain self-reliant: they argue that volunteers should be recruited and deployed on the frontline; state-aligned Azerbaijani media claims that Azeri volunteers already have started to press the Azerbaijani government in Baku for such a mission.

“Russia is our strategic partner, but it sells weapons to Azerbaijan which kill our soldiers and fires on our villages with those arms,” stressed Ashot Makarian, a 39-year-old Yerevan construction worker. “Despite all this, the spirit of the Armenian army is very strong. We cannot be defeated. Today, it would be better for us to go to the front than send our children there tomorrow.”

Some analysts wonder whether Russia has made a secret deal with Azerbaijan, in which Russia would compel Armenia to accept territorial concessions concerning Karabakh, and in exchange Azerbaijan would join the Kremlin-led Customs Union. Neither Russia nor Azerbaijan has given any hint such a quid-pro-quo has ever been considered; and such speculation does not have wide currency outside Armenia.

“Armenia has to find a way out of this Eurasian Union path, as it is something that Russia wants to sell to Azerbaijan through Armenia,” Mehrabian argued.

Political expert Ara Papian, head of the Modus Vivendi Center, a think-tank, argues that concerns about a Russian sell-out are overblown. Papian added that President Sargsyan – a Karabakhi native who led the territory’s armed forces from 1989 until 1993, and served as Armenian defense minister at the time of the 1994 ceasefire agreement – would backtrack on Karabakh at this time.

“The Russians have already realized that they can dictate many things to Armenia and even gain concessions from it, but they cannot make us give away Karabakh because we’ve paid too dear a price for it,” Papian said in reference to the thousands of ethnic Armenians killed, wounded or made refugees during the 1988-1994 war with Azerbaijan. “Karabakh is not a distribution network or a power plant; it’s much bigger, a part of our homeland.”