Armenia Wonders: Are We At Risk From US Sanctions?

The US Embassy in Yerevan has warned that Russian arms purchases could subject the country to sanctions. 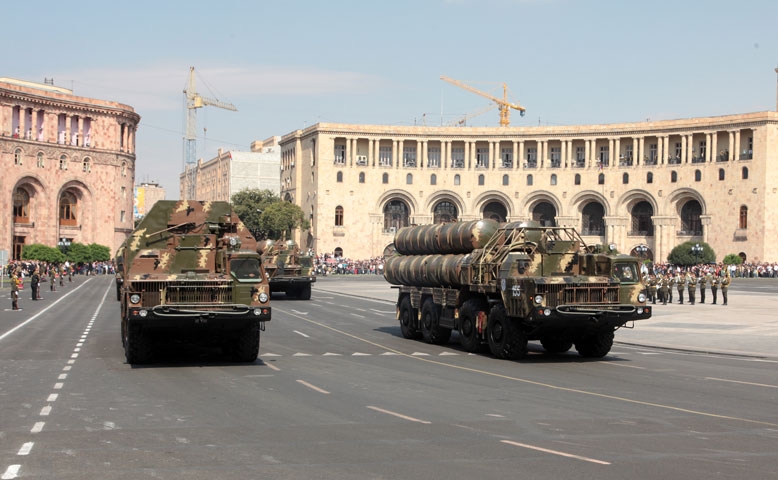 The United States has reportedly notified Armenia and other countries that they are at risk of sanctions if they continue to buy Russian military equipment. But the scale of the sanctions is so great to make them nearly impossible to impose, rendering the American threat mostly toothless.

At the end of January, new US sanctions went into effect that would allow the US to impose a range of financial penalties on anyone who “engages in a significant transaction with a person that is part of, or operates for or on behalf of, the defense or intelligence sectors of the Government of the Russian Federation.”

Russia is the second-largest arms exporter in the world, so the list of those theoretically at risk is massive. But the threat seems to have resonated particularly in Armenia, which relies heavily on Russian weaponry but which wants to maintain good ties with the US, as well.

The Armenian newspaper Haykakan Zhamanak reported that the U.S. embassy in Yerevan warned the Armenian government that they ran the risk of sanctions. Radio Azatutyun, the Armenian service of Radio Free Europe/Radio Liberty, followed up and was told that Armenia was not being singled out in this regard.

“We are implementing the legislation passed by the US Congress in the Countering America's Adversaries Through Sanctions Act, with the aim of forcing Russia to dispel our concerns regarding its aggression toward Ukraine, interference in the internal affairs of other countries, and violations of human rights,” the embassy told Radio Azatutyun. “Foreign governments and private companies were informed that significant deals with Russian companies included on the [sanctions] list could be subject to sanctions.” It's not clear who else got similar warnings.

Asked about the possibility of sanctions, Deputy Foreign Minister Shavarsh Kocharyan said that speculation was premature. “Let's not get ahead of ourselves,” he said. “We are monitoring the situation, at the same time we want to maintain relations and cooperation with Russia in this sphere, as it is an important part of our security.”

But Armenia isn't the only country so at risk – pretty much every country in the post-Soviet space other than Georgia and Ukraine buys Russian weapons, including Armenia's foe, Azerbaijan. Not to mention dozens of other countries around the world, including significant US partners like India or Iraq. That scale will make the sanctions difficult to implement, said Siemon T. Wezeman, a senior researcher at the Stockholm International Peace Research Institute.

“I'm not sure how that is all going to work, but it would have to be very selective and on a case-by-case basis, where the US could decide to put sanctions on a country for buying Russian weapons but it would most likely be a country with which they already had problems in the first place,” Wezeman told Eurasianet.org in a telephone interview. “So none of their strategic partners, none of their close allies, none of their even less close allies, not when they feel it's not in their interest to do so, so Armenia would probably be safe.”

Armenia also is likely to be protected because Washington appreciates its difficult geopolitical situation, said Suren Sargsyan, an Armenian foreign affairs analyst. “It's a similar situation to when Iran was under international sanctions, and the US closed its eyes to the many aspects of cooperation between Yerevan and Tehran, understanding well that Iran was one of only two corridors to the outside world for Armenia, squeezed between a blockade by Azerbaijan and Turkey,” he told EADaily.

Nevertheless, the ambiguity is forcing allies to at least think about their deals with Russia. "The president can impose sanctions on anyone buying arms from Russia," said Mitchell Orenstein, an expert on post-Soviet foreign relations at the University of Pennsylvania. "Trump has not yet imposed such sanctions, [and] that leaves US allies and others wondering what Trump policy may be. It's difficult to discern," he told Eurasianet.

The US State Department has said that it is does not intend to immediately impose sanctions, but that the mere threat is already doing the job. “We have informed Congress that this legislation and its implementation are deterring Russian defense sales,” State Department spokeswoman Heather Nauert said in a statement, Reuters reported. “Since the enactment of the ... legislation, we estimate that foreign governments have abandoned planned or announced purchases of several billion dollars in Russian defense acquisitions.”

Wezeman said he was skeptical that billions of planned purchases have been abandoned, noting that there have been no large deals that have fallen through.

Some in the region, unsurprisingly, saw a geopolitical angle. “Obviously limiting ties with Russia, with the Russian defense industry would be a significant source of pressure on those states like Armenia and Azerbaijan, which are currently in the sphere of influence of Russia,” said Arman Melikiyan, the former de facto foreign minister of Nagorno Karabakh.

Dmitry Peskov, spokesman for Russian President Vladimir Putin, said the sanctions amounted to “unfair competition on the part of the United States in the market of military-technical cooperation.”