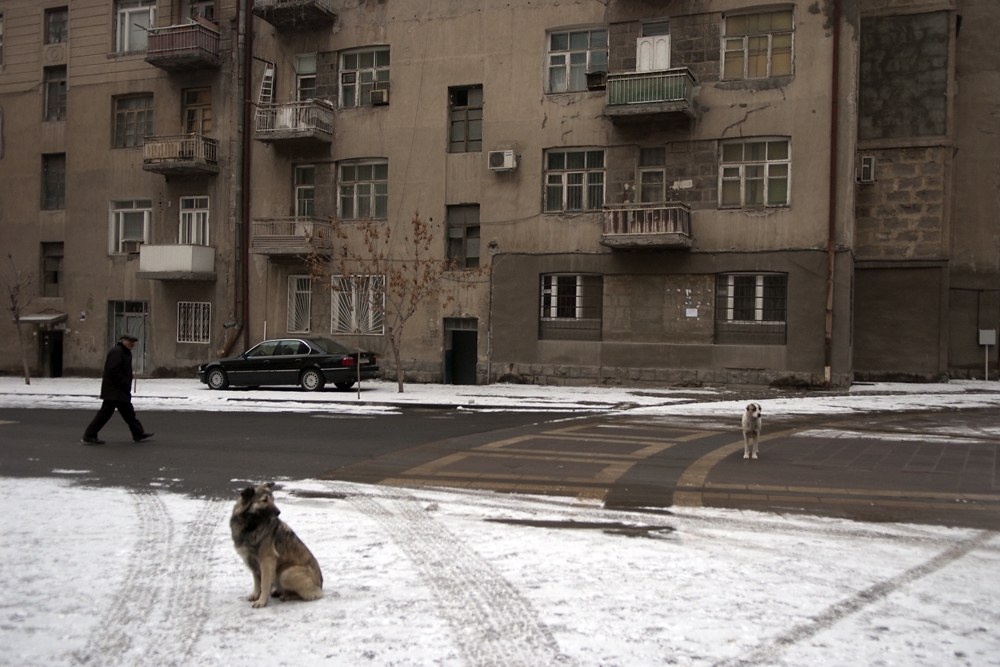 Dog boutiques and animal ownership have risen in the last few years in Armenia, even as the country grapples with the issue of stray dogs. Thousands are roaming the streets of the capital of Yerevan, posing a safety threat to residents.

Authorities have dealt with the problem by periodically culling the stray dog population, rounding them up and shooting them. In recent months, however, animal rights activists have agitated for a more humane approach to canine control. Dozens of activists, including representatives from animal organizations like the Center of Stray Animals Protection, rallied in front of the National Assembly building in early June to promote their cause. In a letter addressed to Yerevan Mayor Karen Karapetyan, the activists urged city officials to develop an initiative to spay and neuter dogs, instead of killing them.

“If we don't solve this as soon as possible, the situation is only going to get worse,” said Nare Aramian, the Armenian representative of the UK-registered animal charity Pro Paws. “Dogs have not only increased in population, they've become more assertive and aggressive.” Aramian added that the number of incidents involving stray dog attacks on city residents has risen over the last five years.

Armenia does not have animal protection laws, according to Aramian. The government allots half a million dollars per year of the annual budget to kill stray dogs. The website of the company that holds the animal-control contract, Unigraph-X, says it carries out the “sterilization and neutralization of wandering animals” in Yerevan. But activists, including filmmaker Ovsanna Hovsepyan, contend that the company relies on an extermination strategy. Not only is that approach not reducing the number of strays on the streets, it is making them more aggressive, activists say.

Those involved in stray control are apparently paid on a bounty basis: the more they kill, the more they earn. Some Yerevan residents says the practices of the stray-control agents creates a nuisance, and is itself potentially dangerous. For example, Milena Maysuryan and Yeranuhi Poghosyan, residents of the 1st Nork Masiv District in the capital, say gunmen come to their neighborhood at all hours, including after midnight, to kill any stray dogs they can find, cutting off their tails as evidence.

“How is this possible?” Maysuryan said. “My child can't sleep at night. With every shot that rings out, she wakes up.”

Maysuryan and Poghosyan recounted one recent incident in which animal control agents shot an eight-year-old neighborhood dog they described as friendly and well-behaved. When Poghosyan asked the men what they were doing, they told her they were hunting foxes, she said. “We don't want them to shoot the dogs, we don't want them to kill the dogs,” Maysuryan said. “Does this nationality not have any other pastime? All they say is the Turks did that, they Turks did this, they should turn around and look at themselves.”

The government does not operate any animal shelters. There is one privately operated shelter in Yerevan, founded by Nune Mehrabyan, who organized the early June rally near the National Assemblyl. Mehrabyan undertook efforts to rescue stray dogs 12 years ago after the shootings began. A pianist by trade, she established “Save the Animals,” an non-governmental organization. The shelter now houses over 200 dogs and relies on public donations to keep operating.

In addition to promoting legislative changes, Armenian animal rights activists are trying to change cultural attitudes. A large attitudinal gap was evident during the early June rally, when two elderly women approached and scolded the activists, asserting that stray dogs have been linked to attacks on children. Such criticism doesn’t daunt the activists. “If they want to or not, they must listen to us, because this problem has to be solved one day,” Hovsepyan said.