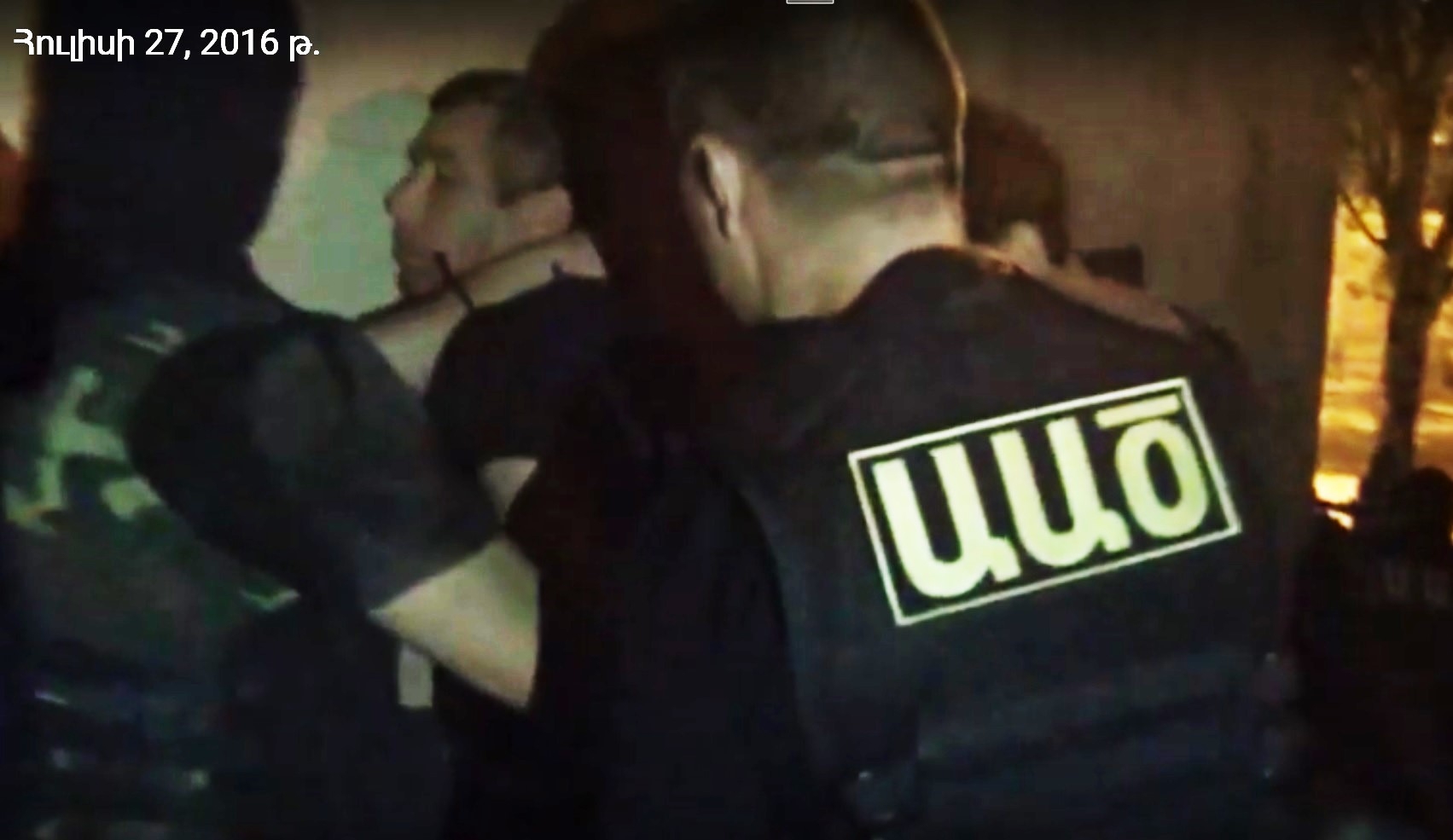 Police surround one of the two Yerevan gunmen who decided to surrender to law enforcement on July 26.

New hostages were taken in Armenia’s capital, Yerevan, on July 27 as an armed standoff between police and gunmen entered its tenth day. Despite the surrender of two of the gunmen, with street support for the group’s defiance of the government persisting, the crisis shows no sign of ending soon.

Officials said that the anti-government militants holed up in the city’s Erebuni police station seized four medical personnel dispatched by the health ministry this morning to treat gunmen wounded by an exchange of gunfire with police late last night.

A representative of the fringe opposition political group to which the gunmen belong, Founding Parliament, categorically denied that the men, mostly Karabakh war veterans, have taken any more hostages.

“The guys aren’t holding anyone as a hostage. They only want the medical presence there to be continuous and . . . for another brigade of doctors to rotate with this brigade,” Founding Parliament member Alek Enigomshian told reporters, RFE/RL’s Armenian service reported.

One policeman and two insurgents -- the gunmen’s most prominent leader, Pavlik Manukian, and his son, Aram -- suffered serious injuries in the overnight shootout and were hospitalized.

The surrender of another two members of the armed group early this morning created a prospect for resolution of the nerve-wracking drama, but the fresh hostage-taking situation brought the drama back to square one.

Twelve participants in a late-night, pro-gunmen rally broken up by police on July 26 have been charged with rioting.

Police have scuffled with protesters several times since the takeover of the building, and have arrested scores of people, including some, witnesses say, who were just passers-by.

The armed men, who include decorated war veterans, captured the station on July 17, killing one policeman and taking several others hostage. They demanded the resignation of President Serzh Sargsyan, a fellow veteran of the Karabakh conflict, as well as the release of Founding Parliament’s leader, government-critic Jirair Sefilian, from jail. The gunmen eventually released these initial hostages, but the standoff dragged on.

The government has disavowed the use of force in resolving the crisis, but, conceivably, as much out of self-interest as any distaste for violence -- as their response to periodic anti-government protests held near the police station suggests.

The group’s attractions for most protesters appear to be related to a widespread thirst for change and a belief that the Armenian government only understands the language of force.

Others scoff at this justification. Yerevan’s latest mass protests to date against unpopular government policies, the Electric Yerevan movement, did not involve firearms, they note.

While public empathy for the plight of the gunmen’s police hostages was not overwhelming, the men taking medics hostage drew condemnations.

"Even during the war [with Azerbaijan] we did not have doctors as prisoners," said Yerevan Clinic Director Dr. Taron Tonoian, also a war veteran, Panorama.am reported.