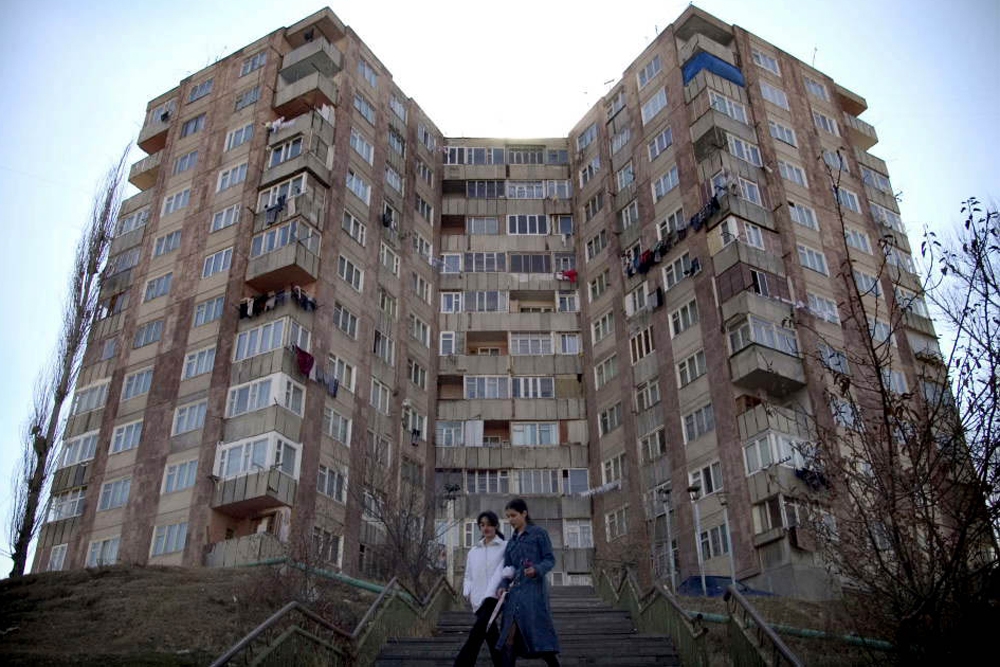 The mayor of Toronto, Canada’s largest city, made headlines recently by admitting to smoking crack cocaine. Taron Margarian, the mayor of Armenia’s capital Yerevan, is generating controversy in a different way – by proffering a vision of glowing flamingoes for his city.

Like any aging city, Yerevan, wants to look its best. But many denizens contend the mayor’s office is wasting public funds by emphasizing gaudy style over substance. Margarian is going about fulfilling a pledge to build a “better Yerevan” by procuring flags, benches and decorative flamingoes, rather than refurbishing the city’s essential infrastructure, including the crumbling sewage system.

For a city government that earlier this year announced a budget deficit of roughly 400 million drams ($985,780) the beautification choices are raising hackles. Helping to compound criticism is the fact that the cosmetic touch-ups are being paid for out of the city’s opaque development budget. Thus, contracts are being handed out without tenders.
Perhaps the most controversial aspect of the beautification plan is a proposal to populate the city center with illuminated figures of antelopes, butterflies and orange flamingoes, situated on artificial grass. The mayor’s office intends to take the menagerie to other sections of the city, too. No information is publicly available about the total cost.

Already, 170 million drams (around $419,453) have been spent on the repair and decoration of up to 130 building archways with scenes of Yerevan, depicting nature and Armenian fairy tales. Many archways, however, were decorated before being repaired. And some residents criticize the murals as unprofessional. No tender was announced for the project.

Those in shock from such murals or the flamingoes now can rest on benches bearing the city’s name – in case anyone forgot it – which have been placed throughout downtown Yerevan. The city shelled out 99 million drams (around $244,000) -- also without issuing a tender -- to purchase 600 of these benches from the local Nikol Duman Foundry. According to figures released by the mayor’s office, each bench cost 165,000 drams (about $407) – a price nearly 40 percent higher than that for similar, non-inscribed benches available online from Armenian vendors.

Another source of outrage is the two-fold increase in the amount shelled out recently to commemorate Yerevan’s 2,795th anniversary (200-million drams or nearly $500,000). No justification was provided for this year’s higher-priced municipal birthday party.

“I feel as if I’ve been fooled by the celebration of my city. Are they kidding us? There are so many problems in our city and they are spending millions on this?” asked 36-year-old Nane Avagian.

Despite the glaring needs, the city doesn’t “have any programs aimed at solving these problems, while the projects that are being implemented are designed for something else,” Kharatian added.

Margarian is a member of the governing Republican Party of Armenia (RPA). His office did not respond to repeated requests by EurasiaNet.org for an interview. However, city spokesperson Artur Gevorgian dismissed critics of the beautification projects as “creeps” and “stinkers” in comments published by the news website news.am.

If anything “stinks” about the projects, it is city officials’ civic planning skills, critics counter, however. “As long as they do not reveal the names of the real owners of the business entities that benefit from these purchases [for the anniversary celebrations], or that make these purchases [for them], and as long as they do not explain the grounds for the purchase prices, there will not be any justification [for the expenditures] that would exclude the risk of corruption,” charged Artur Sakunts, head of the Vanadzor office of the Helsinki Citizens' Assembly, a human-rights non-governmental organization.

Like many others, activist Kharatian believes that the mayor’s office “spends money not on certain projects, but on spheres where certain people have their own interests.”

In July, such beliefs led to a boycott of public transportation in Yerevan after the mayor announced a minimum 50-percent fare hike. Many claimed that the increase was going to line the pockets of political cronies who allegedly own transportation companies. Amid determined push-back from the general public, the mayor decided to revoke the price-increase.

RPA Deputy Chair Galust Sahakian denies that city officials are lining the pockets of their pals. He even suggested the city needed to spend more on updating its appearance. “We have to think about tourism and the reception of guests,” he said.

Sakunts said that obtaining useful information on public expenditures will be possible only if critics mobilize. “If the city council and its so-called [23] opposition members do not fulfill their commitments, the situation will not change. There is a lack of initiative and political responsibility,” he said.

To outside observers, the ballot box might seem one way to hold city officials accountable. City council elections will not be held until 2017, however, and expectations for a change from the RPA in Yerevan run slim.