With the Russian economy hitting the skids, it looks like Armenia wants to hedge its economic bets. 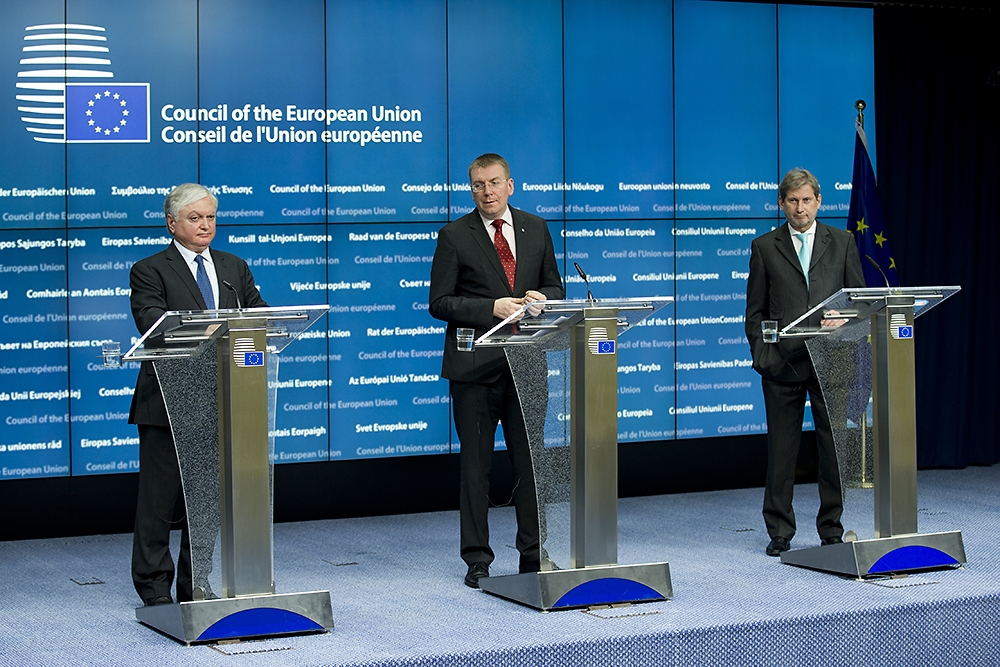 Armenia and the EU to rebuild cooperation? (Photo: European Union)

With the Russian economy hitting the skids, it looks like Armenia wants to hedge its economic bets. Although Yerevan became a member of the Russia-led Eurasian Economic Union in January, a senior Armenian government official told Eurasianet that the country is working to complete an updated version of an EU Association Agreement that Armenian officials put on hold back in 2013.

Balancing trade and other commitments inherent in EEU membership along with those involved with an EU association agreement appear, at least on paper, to be problematic.  But that isn’t deterring Yerevan. A need for money seems to be the main motivation. With Russia, Armenia’s main economic partner, suffering the effects of both low oil prices and Western sanctions, Armenia saw its remittances from guest workers abroad fall by 39 percent in 2014, and exports sag by 18 percent, according to the National Statistical Service. And so far, the expected economic benefits of joining the EEU have not materialized. Simplified export-import procedures are not in effect yet, while import duties have been raised on over 7,000 products.

Many Armenians had hoped Western sanctions against Russia would cause trade volume from Armenia to Russia to rise. Yet Armenian exports ended up dropping by 8.9 percent in 2014 compared to 2013. Russia’s ITAR-TASS news agency, however, claims the exact opposite – an alleged increase of 3.2 percent to $1.5 billion.

Armenian entrepreneurs have not noticed any positive change. “The EEU is, by far, not paradise,” remarked Raffi Mkhchian, head of Armenia’s Exporters’ Union. “Everything is vague; maybe later things will get normalized.”

To justify joining the EEU, Armenian leaders had cited strategic reasons, especially a need for a stronger deterrent against Azerbaijan. But 2014 has seen the most bloodshed in the Nagorno-Karabakh contact zone since the 1994 signing of the ceasefire agreement. Ten Armenian soldiers and two civilians were killed during the first month of 2015 alone.

Political analyst Aghasi Yenokian, head of the Armenian Center for Political and International Studies, characterized the EEU as “half dead.” And given that the EEU shows no signs anytime soon of fulfilling its initial promise, Yanokian said “it is important to have an alternative -- at least in perspective.”

Enter the EU, which, in November, pledged to provide Armenia with up to 170 million euros ($192.48 million) through 2017 for encouraging a variety of reforms, in particular in the justice sector. In a separate package, the EU handed over 77.5 million euros (over $87.7 million) in January for agricultural, anticorruption and civil-service reform projects.

Armenian Prime Minister Hovik Abrahamian stated on January 16 that such cooperation is “of fundamental importance” for bolstering the Armenian economy. Several days later, at a meeting of officials working on forms of cooperation with the EU, word emerged that “renewed cooperation steps” were under discussion.

First Deputy Economy Minister Garegin Melkonian called talks with the EU “productive” and underlined that “active steps are being taken” to formalize Armenia’s cooperation with the EU. The aim, he said, is to hold onto the free-trade and other economic provisions from the 2013 Association Agreement, while “amending the points that are subject to change due to the EEU commitments.”

Armenia already exports more goods to the EU than to fellow EEU-members Russia, Kazakhstan and Belarus, according to the State Statistical Service.

Some observers say Armenia’s re-engagement of the EU doesn’t mean Yerevan is maneuvering to abandon Moscow any time soon. Political analyst Stepan Safarian, a former opposition MP, believes that officials’ interest in the EU is “limited mainly to getting funds from the EU; meaning that these steps to maintain cooperation are mostly taken to not lose that support.”  As yet, Russian officials have not responded to Yerevan’s latest EU overture. Whether that changes “depends on the seriousness of the upcoming [EU association] document,” Safarian said.

At the same time, Safarian believes that rising tension over Karabakh has prompted Armenian officials to acquire “a deeper understanding of the value of an alternative” to the EEU.