The new fighting was an early test for the Russian peacekeeping mission as it tries to manage a new, ambiguous de facto border that passes through populated areas. 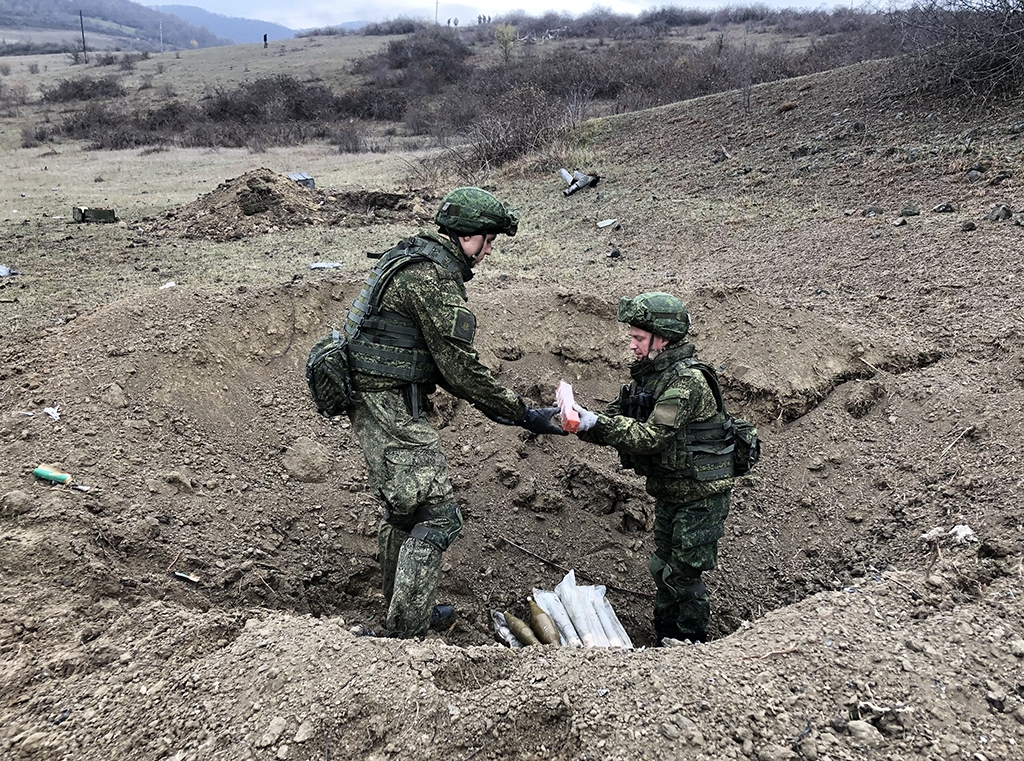 Russian peacekeepers in Karabakh have their hands full (Russian MOD)

Azerbaijani and Armenian forces clashed over the weekend in the first serious test of Russia’s peacekeeping mission in Nagorno-Karabakh since a November 10 ceasefire. The Azerbaijanis attempted to expel Armenian units from a small enclave, saying that Armenians had carried out two deadly attacks on their forces over the past three weeks.

The operation took place around the villages of Hin Taghe and Khtsaberd (which Azerbaijanis call Taghlar and Caylaggala, respectively), in the southeastern part of Nagorno-Karabakh  on December 11 and 12. Six Armenian soldiers were wounded, the Armenian Ministry of Foreign Affairs reported. Armenian Prime Minister Nikol Pashinyan reported that the two villages came under Azerbaijani control.

Azerbaijan did not report any casualties as a result of the operation. In a joint statement, the Ministry of Defense and State Security Service said that they carried out the operation after two incidents in which Armenian forces in the area killed Azerbaijanis. One of the incidents reportedly took place on November 26, in which three soldiers were killed and two wounded. Then, on December 8, the MoD said a soldier was killed and a mobile phone company worker injured while setting up communications equipment in the region. Neither incident had previously been reported and they haven’t been independently confirmed.

“Taking into consideration the above-mentioned, the State Security Service of the Republic of Azerbaijan had to conduct an anti-terror operation in this area,” the statement said.

The clashes highlighted the danger posed by the many areas of ambiguity in the November 10 agreement, and the limited ability of the 2,000-strong Russian peacekeeping unit now deployed there to completely separate the two sides.

The villages where the clashes took place are very close to the border between the former Soviet oblast of Nagorno-Karabakh and the district of Jabrayil. According to the November 10 agreement, Azerbaijan regained control of Jabrayil and any territory in Karabakh that it had recaptured during the war. But it hadn’t taken these two villages, making the current jurisdiction over them unclear. Open source maps appear to place both villages just inside the Karabakh border, which would mean that according to the agreement they should remain under Armenian control.

A video report from Khtsaberd posted on December 3 by the news website CivilNet showed that a self-organized unit of about 60 men, led by one-time opposition politician Hayk Khanumyan, was holding the village, and that no civilians were there. “We are waiting for the peacekeepers to come and relieve us and have this region remain Armenian,” one of the soldiers told CivilNet.

Following the fighting, the Russian peacekeeping contingent made a conspicuous change to the map of its peacekeeping operations in the region that it updates daily. In the December 13 version, it added a tongue of land that includes the area where the fighting had taken place to the territory in which the peacekeeping forces are operating. The new map suggested that the Russians were endorsing the Armenian claims over the territory.

The unilateral expansion of the peacekeepers’ area of operations caused some discontent in Azerbaijan, with several members of parliament and government-friendly media decrying the move. The state news agency APA ran an analysis headlined “Russian peacekeepers in the role of savior of Armenian separatists: Moscow should give explanations.”

One member of parliament, Vahid Ahmedov, suggested that it was motivated by the recent victory parade in Baku, which was attended by Turkish President Recep Tayyip Erdogan and which showed off captured Armenian materiel, most of which was Russian-made. “This has affected Russia, so they are making moves to put pressure on Azerbaijan,” he told the news website Qafqazinfo.

The episode also caused indignation among Armenians, who saw it as evidence that the Russian peacekeepers may be unable or uninterested in protecting the Armenians of Karabakh. Khanumyan led a protest in the Karabakh capital of Stepanakert over the government’s inability to stop the Azerbaijani incursion and met with Russian peacekeepers to inquire what their position was.

On December 14, he reported that Russian commanders told him that they had set up new observation points, including in Hin Taghe/Taghlar itself. “We must realize that the peacekeeping mission has limited staff and can’t be responsible for the defense of our borders. That is the right and duty only of” the de facto Karabakh authorities, Khanumyan wrote in a Facebook post.

Pashinyan convened a session of the country’s security council on December 13 to discuss the fighting. “Russian peacekeepers with more numerous forces have entered the area, and at the moment the situation is relatively stable. At least the presence of peacekeepers gives some confidence that there is a high probability of avoiding further escalation,” he said.

The next day, he described the Azerbaijani operation as a “test” for the Russians. "They [Azerbaijanis] want to show that the peacekeepers are not able to stop the incitements undertaken on their part, and the fate of the Khtsaberd and Hin Taghe section is the first serious test of the peacekeeping mission of the Russian Federation," he said in a Facebook video address.

The ambiguity over the new line of contact is likely to lead to further tension, as the new de facto border runs through many populated areas, noted Olesya Vartanyan, an analyst from the International Crisis Group. She compared the situation to that of South Ossetia in Georgia, where a de facto border being enforced by Russian soldiers regularly ensnares Georgian civilians.

“A good chance this will be a constant point of tensions with incidents, detentions, killings, etc,” Vartanyan wrote on Twitter. “All will be in media boosting pain and possibly even reinforcing calls for a new war.”

To ameliorate the situation Vartanyan said that new, small-scale mediation arrangements have to be worked out so that small disputes don’t escalate. She proposed that representatives of the two sides could meet monthly, with Russian mediation. “This is a practice in many other conflict zones. Unfortunately, #Karabakh conflict never had such experience,” she wrote. “Maybe time to start? Otherwise, difficult to see how to prevent constant tensions on the ground.”