The exchange was carried out in secrecy for security reasons, but both sides reported being politely received on the other side. 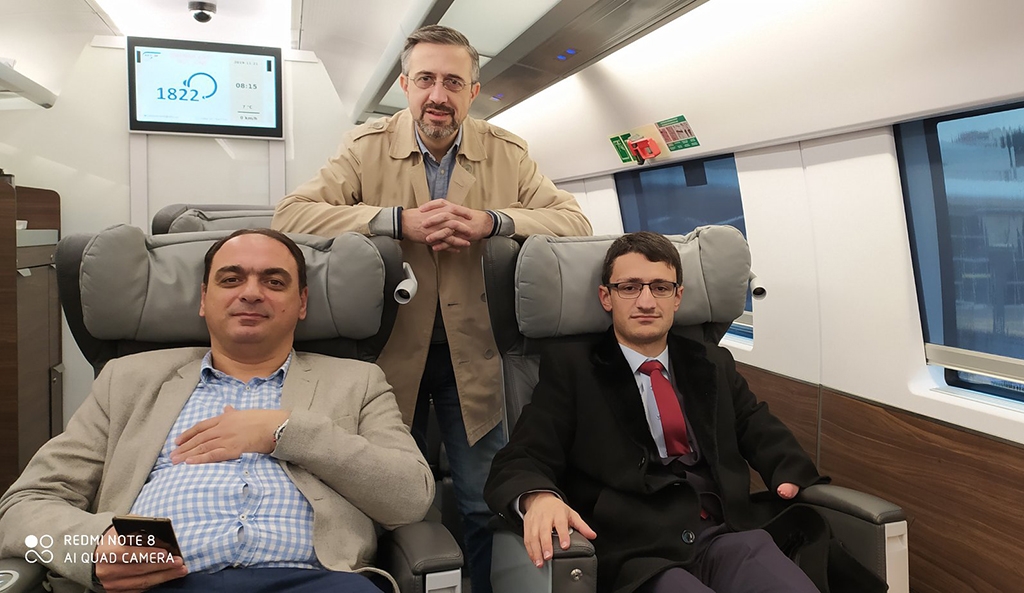 Armenian and Azerbaijani journalists have made mutual visits to the other side in a rare exchange, producing reports that have provided a small human connection between the rival nations, even as they stand firm on their refusal to make political compromises to resolve the ongoing conflict.

The exchange took place under the auspices of the conflict’s international mediators, the Minsk Group of the Organization for Security and Cooperation in Europe, as part of a push that began earlier this year to revive the stagnant negotiations between the two sides.

After an April meeting in Moscow between the foreign ministers of Armenia and Azerbaijan, the two diplomats “expressed their willingness to start concrete work on establishing contacts between people, including through mutual visits of media representatives,” according to the Minsk Group statement.

Both the Armenian and Azerbaijani governments, which facilitated the visits, refused to comment on the exchange until after it was over; both officially acknowledged it on November 23. Security appeared to be the reason for the secrecy, and all the journalists were guarded by large groups of security officers throughout their visit.

There were ample grounds for concern: There is a deep hostility between the two societies, borne out of the decades-long conflict over Nagorno-Karabakh, over which the two sides fought a war in the 1990s. The Armenians won that war, but Azerbaijan regularly threatens to take Karabakh by force if peace negotiations don’t succeed. Since a ceasefire was signed in 1994, contact between the two sides has been minimal, and it is exceedingly rare for visitors from Armenia to visit Azerbaijan or vice versa. Azerbaijani visits to Karabakh are even rarer.

One of the participants, Artem Yerkanyan of the Armenian TV channel Shant, said he was happy for the secrecy. “It was more comfortable to be sure that no one in Azerbaijan knew that Armenian journalists were walking on the streets of Baku, moreover ones that had previously been in Nagorno-Karabakh and writing articles that at times Azerbaijanis didn’t like,” he told RFE/RL. He also said the OSCE made him sign a waiver acknowledging that “after crossing the border [into Azerbaijan] the OSCE bears no responsibility for his security and life.”

Still, word leaked out before the trips even began; in Azerbaijan, the nationalist group Karabakh Liberation Organization threatened the Armenian journalists, whom they called “terrorists and spies.”

In the end, though, the visits went off without a hitch. Since the seal of secrecy was broken, dispatches from the two sides have been steadily coming out, which invariably describe the hospitality and respect with which they were greeted. Even the journalists’ public posts from their trips on Facebook – normally a platform for vitriolic, racist bickering between Armenians and Azerbaijanis – had relatively polite discussions between the two sides.

The respective delegations did not meet with any government representatives, but rather non-governmental organizations and journalists. On issues related to the conflict, though, there is often little difference between the official government positions and those held by the rest of society.

Yerkanyan described one encounter with a group of Azerbaijani journalists in Baku who, he reported, referred to themselves as “soldiers on the ideological front” in the conflict, and reported that they said that “if the political leadership indicated that from now on we need to prepare the populations for peace and decrease the level of mistrust and negativity, then we were ready to do that.” He added: “The three of us had varying opinions on this issue, but we kept them hidden.”

Even as all the journalists described their visits positively, if there has been an overarching theme to the dispatches published so far it is that they reproduced their respective sides’ talking points, and all seemed to see themselves as ideological warriors.

“I repeatedly asked the Armenians I met: ‘What message would you like to send us Azerbaijanis,’ to probe their willingness to compromise,” wrote Elshan Rustamov, a journalist from 1news.az. “Their answers can be summarized: ‘Everything has a price and there is a red line which we will not cross.’ From our side, we emphasized that there is a red line which not a single citizen of Azerbaijan will cross – the territorial integrity of our country.”

Davit Alaverdyan, of Mediamax, said that he also asked his Azerbaijani interlocutors “what concessions and compromise they see as possible.” He found them unwilling to budge on territorial integrity, and concluded: “You can be certain that every such visit helps consolidate the conviction that Artsakh [the Armenian word for Karabakh] cannot be part of Azerbaijan. At the very least, the three Azerbaijani journalists who visited Armenia and Artsakh already know it deep down in their hearts.” (In another dispatch, Rustamov denied Alaverdyan’s claims about their secret convictions.)

From the Azerbaijani side, there appeared to be some wishful thinking in their visit to Karabakh. Both Rustamov and Orhan Yoluchev, of Vestnik Kavkaza, reported that they found among Karabakh Armenians a greater willingness to compromise than among Armenians from Armenia.

“We were struck by the fluent Azerbaijani that nearly every Karabakhi spoke – evidence of the preservation of the ties and of the greater mental resemblance to the rest of the Azerbaijani population,” Yoluchev wrote. “And that is the basis for a real dialogue.”

The visits were closely monitored and discussed on social media, and many Armenians were irritated by the Azerbaijanis’ invariable references to Karabakh as “our soil.” But Edgar Elbakyan, the journalist from Karabakh state television, responded jokingly in a Facebook post. He posted a photo of himself next to the hot water dispenser in his hotel, which was labeled in Azerbaijani “Isti Su,” which also happens to be the name of a former resort in Kelbajar, one of the territories surrounding Karabakh that Armenian forces control. “I must say that I also found my place in Baku,” he wrote. “Bringing foreigners to their ‘historical homeland’ can be a profitable tourism niche.”