The two leaders scored points with audiences back home, but the event seems unlikely to have advanced the prospects for peace between the two rivals. 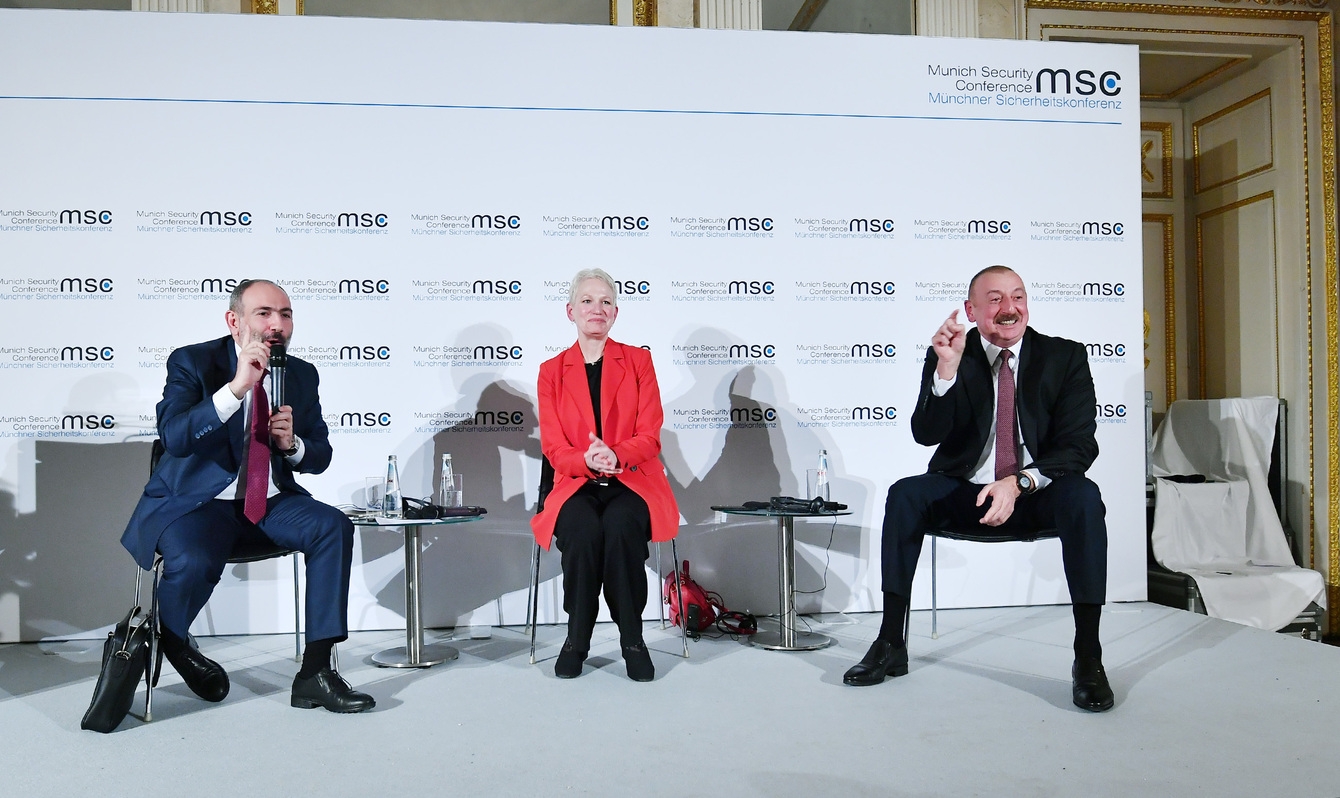 The leaders of Armenia and Azerbaijan sparred in an extraordinary public debate in front of the global political elite and – in a surprise to absolutely no one – the event was dominated by dodgy historical claims and political point-scoring and seems likely to only set back the prospect of peace between the two countries.

President Ilham Aliyev of Azerbaijan and Prime Minister Nikol Pashinyan squared off on February 15 at the Munich Security Conference, a gathering of world leaders and policymakers. It was unclear how the event came about, and it was only announced a matter of hours before it took place.

Aliyev spoke first, and he set the tone by beginning his remarks: “First we need to go back and look at the history of the issue,” then launching into a history beginning with the 1805 Treaty of Kurekchay. When it was Pashinyan’s turn to respond, he went back far deeper in history, to the first-century B.C. era of King Tigran the Great, when “there wasn’t any country named Azerbaijan.” Pashinyan repeated a conspiracy theory that Azerbaijanis themselves committed the notorious Khojaly massacre against their own people, and that Nagorno-Karabakh was part of Soviet Azerbaijan only as a result of conspiring between “Lenin, Stalin, and Ataturk.” Aliyev said the Russian media was controlled by Armenians. And so on.

As one Twitter user later put it, rather than watching the event one could “just read some YouTube comment sections between Armenians and Azerbaijanis. It was not much different.”

The debate came as peace negotiations between the two sides over Nagorno-Karabakh, the territory both claim, have stalled after an initially promising period following Pashinyan’s rise to power in the spring of 2018.

Those not deeply steeped in the conflict no doubt found the debate opaque, and in spite of the high-level setting neither leader made any attempt to explain it to a broader audience. Instead, it seemed targeted most of all to the two men’s domestic constituencies back in the Caucasus.

Still, the debate was notable for the friendly mien that both leaders maintained throughout. At one point during a spirited exchange of arguments, the moderator – Celeste Wallander, a former senior White House official and head of the U.S. Russia Foundation – assured the audience “at least they’re both laughing,” which they were.

And toward the end of the 45-minute event, there were some statements that were moderately noteworthy for close watchers of the conflict.

Pashinyan noted that: “I’m first Armenian leader to say that any solution should be acceptable to Azerbaijani people as well.” This has become a regular talking point for the Armenian leader, presented as if it’s a concession, though its apparent magnanimity is undermined by the fact that Pashinyan has not even hinted that he’s willing to give Azerbaijanis what they want.

In Munich, Aliyev for the first time responded to this argument: “What is acceptable to the people of Azerbaijan?” he asked. “The people of Azerbaijan who suffer from Armenian aggression want to go back to their homes. It is a fundamental right and they are deprived of this right for almost 30 years.” (About 600,000 Azerbaijanis were displaced as a result of the war from Karabakh and the surrounding territories now controlled by Armenian forces; their right of return is one of the issues under negotiation.)

Aliyev also responded to Pashinyan’s argument that the de facto leaders of Karabakh should be a third party in the negotiations instead of having their interests represented by Armenia. “We are ready to talk to Nagoro-Karabakh in case Armenia stops funding this illegal entity, Armenia pulls back all troops from Nagorno-Karabakh, completely withdraws from our territory,” Aliyev said. “Then we will have arguments to talk with these people. But [as long as] they are there, no way.”

Pashinyan offered a bit of an olive branch to Aliyev, noting that a notable reduction in violence between the two sides dates from a late-2018 meeting between the two leaders in Dushanbe in which they agreed to set up a new communication line between the two militaries. Aliyev “made a mini revolution, because after that meeting the tension in general reduced unprecedentedly,” Pashinyan said. “President Aliyev is co-author with me.”

The constructive mood was then spoiled after Wallander tried to wrap the event up and Aliyev instead insisted on the last word in which he reverted back to historical claims, arguing that “in Yerevan 70 percent of the population was Azerbaijani at the beginning of the 20th century.” Pashinyan, in turn, insisted HE have the last word and again went back to ancient times to minimize Azerbaijanis’ historical claim to their territory. “At the time of Tigran the Great there were only two nations [in the Caucasus] – Armenia and Georgia.”

The consensus among close observers of the conflict was that the event was counterproductive.

“Even with the bar set vanishingly low, the Münich panel today bringing together leaders of #Armenia and #Azerbaijan was very disappointing,” tweeted Laurence Broers, a longtime scholar of the conflict and Caucasus program director at the peacebuilding NGO Conciliation Resources. “Both leaders missed almost every opportunity to step away from the same tired routine we’ve heard for years… The very few constructive sentiments got lost in historical-legal posturing, presumably for domestic audiences. Few people outside of the Caucasus will have understood much of that.”

“If the next time they meet in public Aliyev speaks Azeri and Pashinyan speaks Armenian, that would be easier for them and nothing would change. No translators needed,” tweeted Grigor Atanesian of BBC Russian.

And the conclusion of Olesya Vartanyan, an analyst at the International Crisis Group who works on the conflict, was: “Never do this again.”