Azerbaijan announced the drills shortly after its president issued aggressive statements about Armenian territory, leading to rumors among Armenians about a new war. Our weekly Post-War Report. 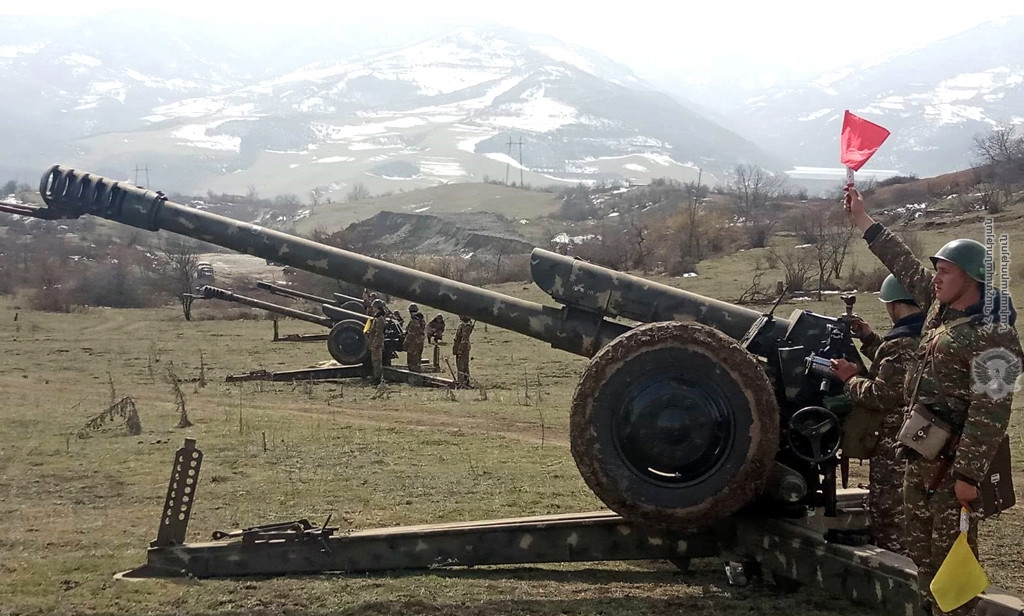 As tensions around the exercises grew, Russian officials felt compelled to try to tamp down concerns. (Armenian Defense Ministry)

Armenia and Azerbaijan both conducted large-scale military exercises this week, on relatively short notice, amid heightened fears that war was again going to break out.

The exercises themselves were standard issue. At least according to the official description, Azerbaijan’s were almost identical to drills that took place in May 2020, noted Nagorno Karabakh Observer, a blog and Twitter account that closely follows military developments in the region.

But the political context in which the exercises took place gave them an additional piquancy.

On March 5, Azerbaijan President Ilham Aliyev complained that Armenia was dragging its feet on implementing one key part of the November 10 Armenia-Azerbaijan-Russia ceasefire statement: that Azerbaijan would be allowed to use some sort of transportation infrastructure in southern Armenia to connect the Azerbaijani mainland with its exclave of Nakhchivan. “Now Armenia wants to prevent the implementation of the Nakhchivan corridor,” he told a congress of his New Azerbaijan Party. “But they won’t succeed. We will force them.”

(Armenia has been objecting to Azerbaijan’s description of the as-yet-undetermined transportation arrangement as a “corridor,” as that phrase implies some kind of sovereignty, as in the “Lachin corridor” that connects Armenia to Nagorno-Karabakh, the territory at the heart of the conflict between the two sides. Armenia insists it will retain full sovereignty over the transportation routes. But more on that in a future report.)

Aliyev didn’t help matters by, a day earlier, reiterating his claim that Zangezur – the Azerbaijani name for the territory of current-day southern Armenia – was “historically” Azerbaijani. “The new transport corridor … will pass through the historical territory of Azerbaijan – Zangezur,” he told an economic conference.

Taken together, many Armenians interpreted all this as a threat by Aliyev to continue the fighting into Armenian territory, in the region that they call Syunik and which has been a site of particular tension ever since the fighting ended in November.

Rumors began to spread and were given credence by Armenian officials like Edmon Marukyan, the leader of one opposition faction in parliament, who called on Russia to set up a military base in the region to deter this sort of Azerbaijani/Turkey attack.

Unfortunately, there are several giveaways from open sources of an imminent Azeri-Turkish operation in Southern Armenia. The goal of the potential operation would be to open a "corridor" from the territories which came under the control of Azerbaijan on Nov. 9, to Nakhichevan. pic.twitter.com/JBtbB4B8Fa

The Armenian National Committee of Armenia, a leading lobbying group for Armenian-Americans, warned President Joe Biden and other American officials that “Azerbaijan and Turkey are targeting Syunik, Armenia for their next attack.”

ALERT @JoeBiden + @SecBlinken/@StateDept: Azerbaijan and Turkey are targeting Syunik, Armenia for their next attack. #Retweet pic.twitter.com/aMPm4OXQWu

Rumors even spread of an alleged specific date on which the Azerbaijani/Turkish attack would begin: March 16, which fortunately came and went without any major clashes taking place.

As all this was happening, the Armenian government saw fit to reduce funding for the country’s human rights ombudsman, who had been using his post to act as a gadfly calling attention to the many confusing and intimidating developments that Syunik residents are facing now that they find themselves in new proximity to Azerbaijani forces. Many in Armenia saw a political motive to the downgrade of the ombudsman’s office and it even earned the Armenian government a rap on the hands from the U.S.-based human rights watchdog Freedom House.

Meanwhile, Azerbaijani officials stepped up their complaints about reports that Armenia was continuing to send its armed forces into Karabakh. Following a skirmish in December in the region of Hadrut, Azerbaijan captured 62 Armenian soldiers and continues to hold them. (It’s not clear whether Armenia is doing anything different from what it has done since the 1990s, which is to heavily support the de facto Karabakh armed forces and supplement them with its own military units. But following the war, Azerbaijan has become bolder in demanding that Yerevan cease its military support for the self-proclaimed Nagorno-Karabakh Republic.)

On March 13, Foreign Minister Jeyhun Bayramov sent a letter to the United Nations Secretary-General calling attention to the issue, alleging that Armenia was sending troops to Karabakh secretly, in civilian clothing, in order to evade checks by Russian peacekeepers. “Such a misuse of the [Lachin] corridor for military purposes is a gross violation of the trilateral statement. It undermines peace efforts and demonstrates the true intention of Armenia,” Bayramov wrote.

As tensions around the exercises grew, Russian officials felt compelled to try to tamp down concerns. “According to the information we have, the exercises are planned ahead of time, aimed at improving military readiness of the armed forces and don’t constitute a risk for stability and security in the region,” Russian Foreign Ministry spokesperson Maria Zakharova told reporters.

After all that, the exercises themselves were a bit of an anticlimax and proceeded without much drama.

Despite the large scale of the exercises – 10,000 troops on the Azerbaijani side and 7,500 on the Armenian side, along with hundreds of pieces of heavy armor and weaponry – they took place amid such secrecy that it wasn’t even clear where they were being conducted. The only media coverage of them was via official releases, photos, and videos from the respective ministries of defense.

Azerbaijani analysts argued that the exercises were aimed at preventing “sabotage groups” like the one Azerbaijanis captured in Hadrut. “These exercises are focused on anti-terror operations in the zone of precious military activity,” analyst Ilgar Velizade told the Russian newspaper Kommersant. “The logic is understandable – there is still a great probability of destabilization from groups that can infiltrate across lines and carry out partisan warfare.”

For Armenia, it appeared to be more about reassuring the public and beginning to restore morale in the military.

“What’s important is the mere fact that these are the first post-war exercises and that they are being conducted parallel to major exercises of the Azerbaijani military,” analyst David Artyunov told Kommersant. “This is a reaction to them and a signal to society that we shouldn’t be afraid of the Azerbaijani exercises. On top of that, the exercises could also be seen as a statement by the military leadership about the restoration of the army’s potential.”

Artyunov added, in another interview with Sputnik Armenia: “After the defeat, one possibility of an exercise of this scale, gathering dozens and hundreds of pieces of hardware is to signal a ‘restart’ of the Armenian army.”

Azerbaijan’s exercises ended on March 18. Armenia’s are scheduled to wrap up on March 20.