Armenian election campaign kicks off, with some accusing Pashinyan of jumping the gun

He may not need the advantage, as polls show his alliance with a commanding lead. 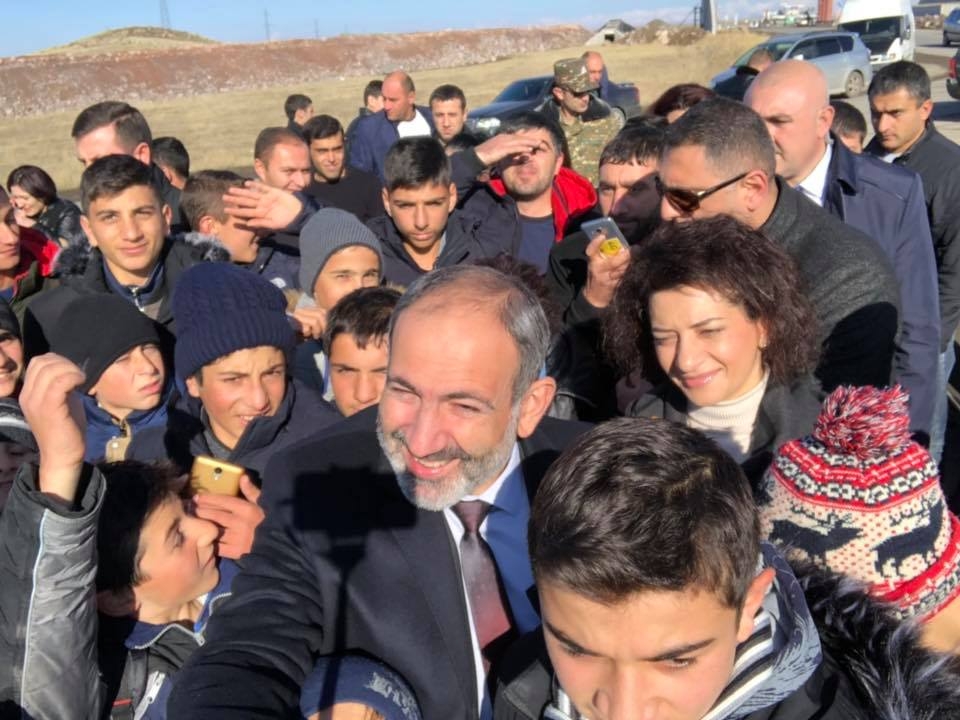 Armenian Prime Minister Nikol Pashinyan takes a selfie with a group of schoolchildren. His recent events have come under fire from those who accuse him of mixing official business with campaigning. He posted this photo on Facebook, with the ironic caption: "Another abuse of administrative resources."

Armenia's campaign for pivotal parliamentary elections officially kicked off on November 26, but a rally held by Prime Minister Nikol Pashinyan two days earlier had some accusing him of jumping the gun.

The November 24 rally was designed, in Pashinyan’s words, to “conclude the first stage of the Velvet Revolution.” It consisted of a marathon 37-kilometer march around Yerevan, a reprise of the sort of daily marches he led in April, which eventually gathered such popular force that then-leader Serzh Sargsyan was forced to step down, to be replaced by Pashinyan.

But to some observers, the march was too much like an election rally which, according to regulations of the Central Election Commission, weren’t supposed to start until November 26. The election itself is scheduled for December 9, and Pashinyan’s My Step alliance, led by his party Civil Contract, is expected to be the big winner.

"Usually marches are aimed at demonstrating grievances to the government,” said Ara Ghazaryan, a lawyer and activist, in an interview with the investigative news website hetq. “If the government organizes it, the only conclusion is that it is a campaign event.”

The week ahead of the march, Pashinyan also made several trips outside Yerevan. While they were ostensibly part of his official duties as prime minister, good government groups said they contained elements of campaigning. That, they said, amounted to a use of administrative resources for political purposes – an accusation that opposition forces would regularly level against the formerly ruling Republican Party of Armenia.

Pashinyan had pushed back against those accusations, saying they amounted to a ban on leaving his office, but Varuzhan Hoktanyan, a project director of the Armenian branch of Transparency International, the anti-corruption group, said Pashinyan was using double standards.

Pashinyan’s political opponents also criticized him for the early start. “These regular violations of the rules of law and campaign have begun when the official campaign has not started,” said Davit Shahnazaryan, a political analyst now running for parliament as a Republican. “He wants to make the elections into a demagogic, crowd-leading process because then there will be no political debate, and only one opinion, the familiar, crowd pleasing rhetoric,” he said in an interview with Armenian website news.am.

Others criticized Pashinyan on other grounds: the scant turnout for the march. Pundit and blogger Tigran Kocharyan published photos on his Facebook page in which it looked like only a few hundred people were marching with Pashinyan. “If you take out journalists, security and the police, the image is really concerning,” he wrote.

Pashinyan claimed, by contrast, that “tens of thousands” were marching, but sounded a bit of a defensive note. “For those who talk about the allegedly small number of today’s rally participants – try walking 37 kilometers and see how many of your family members will join, or even if you yourself will be able to make it.”

He also responded to the allegations of using administrative resources by promising to take a “vacation” for the two weeks leading up to the vote in order to devote himself fully to the campaign.

Most of the other parties hoping to make it into parliament formally kicked off their campaigns on November 26. Republican member of parliament Armen Ashotyan held a press conference and rebutted Pashinyan’s previous mockery that the party would get “zero” votes. “Obviously, we will not get zero votes, it's obvious that we will receive thousands of votes, tens of thousands of votes.” But he seemed to be bracing for a poor result: “Even if we do not get into parliament, those tens of thousands are the full citizens of Armenia holding the passport of the Republic of Armenia.”

Ashotyan also trolled Pashinyan’s vacation. "Why leave the country's problems for two weeks? Where is his dedication to the state?” he asked. “You did not work well as a prime minister, Mr. Pashinyan, and now you have left the matters of state to the first deputy prime minister for two weeks.”

Sasna Tsrer, the armed-radical-group-turned-political-party, launched its campaign with an outdoor press conference in front of the parliament building. Varuzhan Avetisyan, who heads the party’s list, expressed confidence that the party would make it into parliament but also predicted it would have a short life and that elections would have to be held in another two years.

Prosperous Armenia also gave a press conference, in which party official Gevorg Petrosyan indirectly raised the issue of LGBT rights with which some Pashinyan opponents have tried to use against the current authorities. The party’s presence in parliament, Petrosyan claimed, would “solve the issue of the Armenian family” which he suggested was under threat.

“Bright Armenia,” which is running separately from its current coalition partner Civil Contract, kicked off its campaign with a walk of its own around Yerevan. Edmon Marukyan, the chair of the party, said they saw themselves as second-place hopefuls. “The revolution decided who was first,” he told reporters. “December 9, people will choose the opposition.”

Meanwhile, a Gallup poll released on November 26 had bad news for anyone other than My Step. According to the results, more than 68 percent of voters said they planned to vote for Pashinyan’s team, while 7 percent supported Prosperous Armenia. No other party broke 2 percent, though 13 percent of those polled did not respond and 7 percent did not know.