Once Armenia’s democratic hope, Pashinyan is now calling for “vendettas” and to “replace his velvet mandate with a steel one.” And he’s not the only candidate using that kind of language. 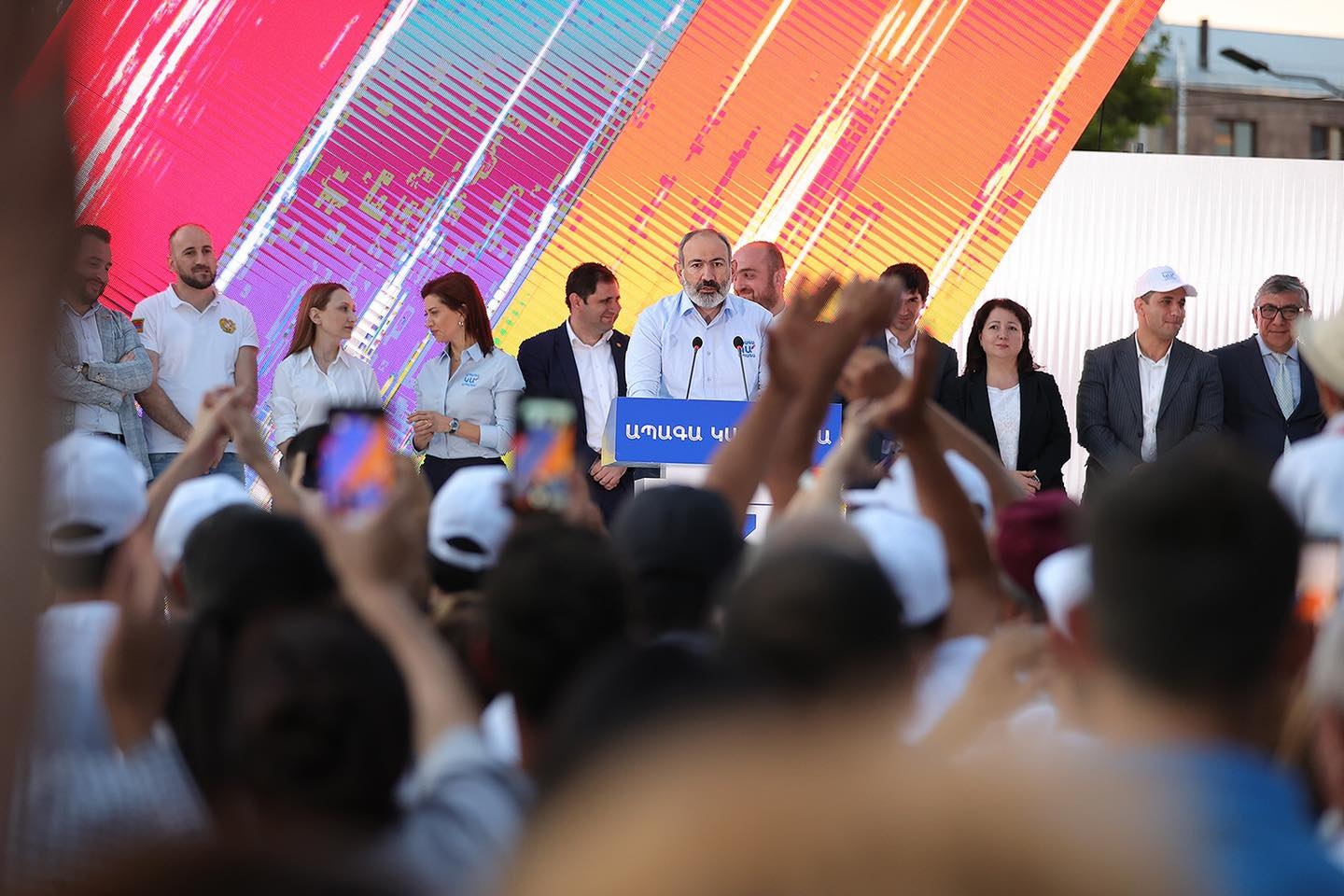 When Nikol Pashinyan came to power in Armenia in 2018, he did so on the promise of a “non-violent, velvet, popular revolution.” Now, as he faces a difficult reelection campaign, his rhetoric has hardened and he has promised a “vendetta” against his opponents.

He is not the only leading candidate to use violent rhetoric in the heated campaign ahead of the June 20 election, and some observers are warning about the danger posed by such language in Armenia’s polarized post-war society.

At a June 8 rally in Aragatsotn province, Pashinyan recalled that when he came into power he did so promising that he would not carry out retributions against officials from the authoritarian regime he toppled. Now, though, he said the situation is different and that he will punish public officials who use their office to undermine him.

“I am telling you now straightforwardly and clearly: There will be vendettas after the elections against those local authorities who try to coerce people,” he said.“I don’t care if an organization is private or public, those organization leaders who coerce their employees in any way will be subject to the most cruel, but political vendetta.”

Pashinyan is facing a large slate of challengers in the early elections, which were called after a long political crisis following the country’s disastrous defeat in last year’s war with Azerbaijan. The discourse has been heated from many sides.

In late May, Pashinyan invited two of his main challengers, Levon Ter-Petrosyan and Robert Kocharyan – both former presidents – to a debate. Both rejected the invitation.

Kocharyan specified on June 5 that he was not interested in a debate but would be ready for a duel. “With any type of weapon,” he added.

Pashinyan responded to the challenge at a meeting with his supporters on June 8. “I will destroy you with my words, my heart, my mind and the people’s support. Say the date and place, take whatever weapon you want, and I will come with the people, and we will slaughter you in a political sense,” Pashinyan said.

On the same day, a priest appeared at a rally for the Kocharyan-led “Armenia” coalition. The priest, Aharon Melkumyan, said that when Pashinyan was leading the 2018 protests that would eventually sweep him to power, he had offered to “put a sack on [Pashinyan’s] head and lose him before he destroys Armenia.”

Personal insults also have been flying in many directions.

Pashinyan said he does not consider Kocharyan “a man”: “Robik, you nothing, you are nobody.” Serzh Sargsyan, another former president who supports the “I have honor” coalition centered primarily around the former ruling Republican Party of Armenia, called Pashinyan “immoral” and threatened to “slaughter” him.

This is not the first time Pashinyan has drawn criticism for his violent language. In September 2018, four months after coming to power, he threatened to “put on the asphalt” the bodyguards of oligarchs, a threat that became notorious. In April 2019, he expanded on the threat, telling “those who would try to solve problems with violence” that he would “not only put them on the asphalt but throw them against the wall.” (If the irony was apparent to him, he did not let on.)

But in this tense period, with political polarization at its peak, the rhetoric is causing particular alarm.

Ter-Petrosyan, in a June 7 speech to supporters laying out his party’s program, said that the upcoming elections are going to be “the most dangerous in the Armenian history.” Pashinyan and Kocharyan are both desperate for power, he added, and the fact that they both command large resources makes the situation “explosive․”

In response to the heightened rhetoric, some are calling for a cooling off.

The country’s Ombudsman, Arman Tatoyan, issued a statement on June 9 expressing concern over the campaign’s tense atmosphere: “This deepens the polarization in society and undermines the prospect of restoring solidarity in the country.”

“The real danger of such rhetoric is that it further exacerbates the existing tension, and carries dangerous risks for it to carry over into real life,” Tatoyan warned. He argued that while Pashinyan had specifically mentioned he was not talking about physical revenge when he spoke of “vendetta,” that “did not neutralize the dangerous influence of what he said.”