The minister enjoyed an unusually long tenure in Armenia's government, more than two years, resigning only after the defeat in last year's war with Azerbaijan. 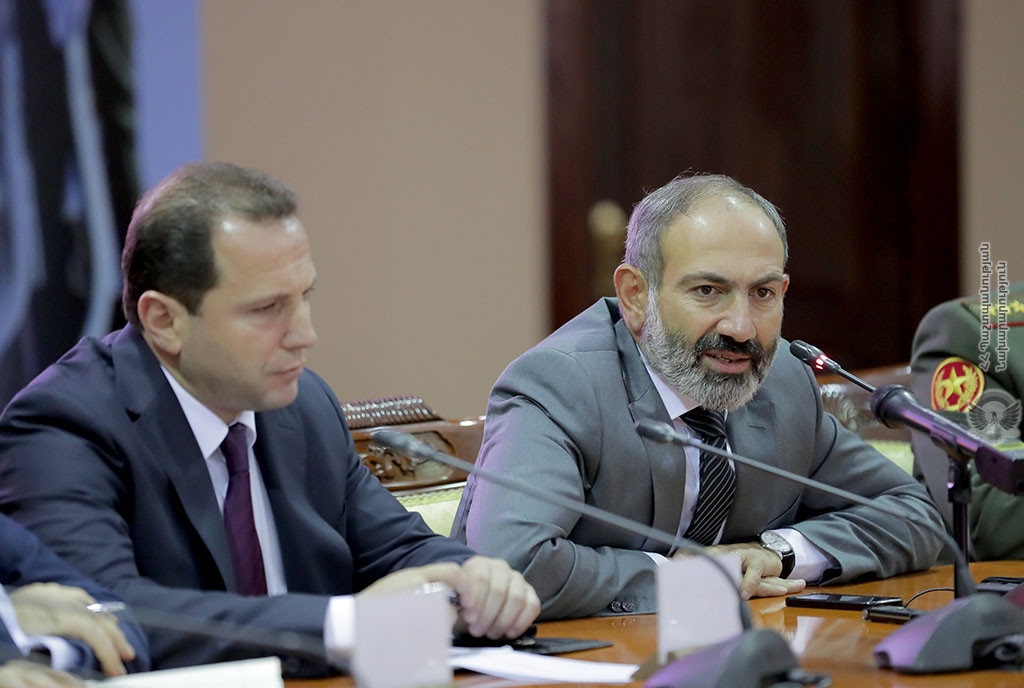 The Armenian authorities have detained a former defense minister and a major arms dealer on charges related to purchases of faulty weaponry.

The National Security Service (NSS) announced on September 30 that it had detained former defense minister Davit Tonoyan on charges of “embezzlement of large sums of money, falsifications, committing publicly dangerous acts.” The NSS also detained David Galstyan, the head of a defense contractor supplying weapons to the Armenian armed forces. Together, the two are charged with stealing approximately 2.3 billion drams ($4.7 million).

The case involves the purchase of missiles – the seller, type of missile, or year when they were purchased was not identified – that were produced between 1985 and 1991. The NSS also said that “large-scale” investigations are continuing to fully uncover the chain of crimes and all the people involved.

On September 25, the NSS – citing the same amount of embezzled money – said that it had arrested another senior military figure, the head of the aviation department of the armed forces. According to the NSS, the officer knew in 2011 that the missiles were faulty and unusable, but bought them anyway. The statement did not name the officer, but from 2009 to 2019 that post was held by Major General Avetik Muradyan.

"Some of the missiles failed to fire shortly after delivery, and were taken out of the arsenal. The rest were not used at all, including during the 44-day war that began on September 27, 2020,” the NSS said in its statement. Deputy Chief of General Staff of the Armed Forces Stepan Galstyan was also questioned in the case, the NSS reported.

Davit Galstyan, the arms dealer, is already facing a similar charge that was filed in February. In that case, Galstyan’s firm Mosston Engineering (an offshore company registered in the Seychelles) is accused of embezzling $1 million. That case involved the purchase of artillery shells: Mosston was contracted in 2018 to supply the military with a certain type of shell, produced between 1983 and 1986, but the firm instead bought Czechoslovakian shells produced in 1977, which were “significantly inferior.”

Galstyan’s lawyer told journalists on September 30 that his client denied the charges, and that “this is a completely new case, has nothing to do with the old case.”

Tonoyan hasn’t been named in the first investigation, even as a witness, even though he was appointed defense minister in 2018.

Tonoyan has spent almost his entire career since the late 1990s in the armed forces and defense ministry. He appeared to enjoy an unusual amount of trust from Prime Minister Nikol Pashinyan, as his tenure lasted more than two years – a rarity in the quickly churning government. Tonoyan resigned last November, a week after the end of the war with Azerbaijan, following public pressure.

Galstyan has long been known as a murky operator. A 2011 United Nations Security Council report found that one of his firms, "DG Arms Corporation,” illegally bought and transported ammunition to Libya in violation of international sanctions. In another episode, Mosston was reported to have transferred 275,000 euros to an offshore account belonging to Ukraine’s then-president Petro Poroshenko for a VIP jet service.

None of that stopped the government from working with him.

On August 21, 2018, the Ministry of Defense announced that it had reached an agreement with a firm owned by Galstyan, Royalsys Engineering LTD, to produce Kalashnikov rifles in Armenia. No such company is registered in Armenia, but the Panama Papers leaks included information about a similarly named company with a spelling error: Royalsys Enginerring.

Tonoyan was confronted at the time by a journalist from the news outlet Civilnet about the fact that no such company existed in Armenia, but Tonoyan denied it. In 2019, Davit Galstyan was appointed adviser to Tonoyan.