Serzh Sargsyan’s lawyers said the timing of the charges was suspicious, coming amid a period of bad news on the border with Azerbaijan. 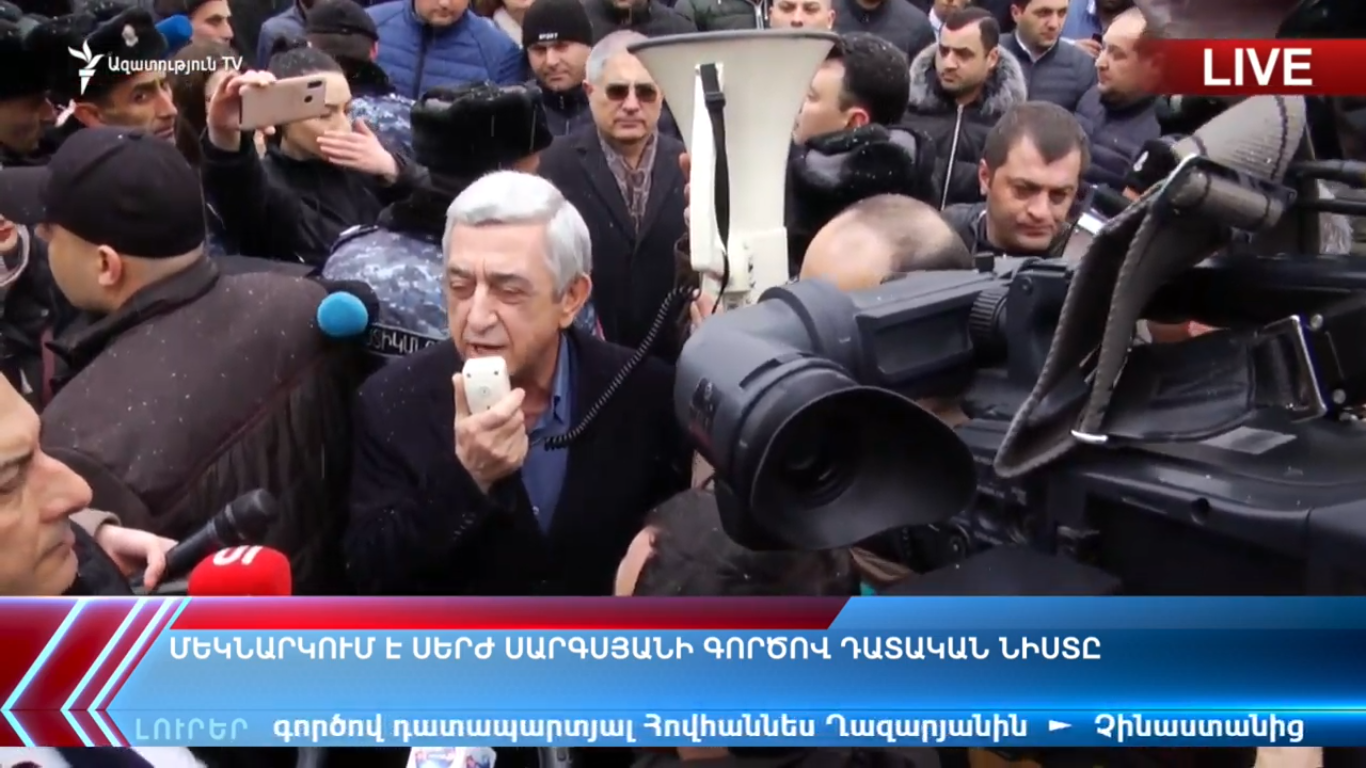 Armenia’s former president Serzh Sargsyan has been charged with taking a bribe, an accusation his lawyers say was made to distract from a security crisis on the Azerbaijani border.

On November 22, Sargsyan’s lawyer posted on social media that he had received a notice that his client had been formally charged with taking a substantial bribe as an official.

The charges were brought in connection with a sprawling investigation covering the infamous events of March 1, 2008 – when protests against a fraudulent election were violently broken up – and bribes alleged to have been taken by officials in the former regime, both connected to those events and not.

The bribery charges stem from the testimony of businesswoman Silva Hambardzumyan, who has also said she bribed another former president, Robert Kocharyan, and other officials, to get favors for her mining businesses. The case was opened shortly after Sargsyan was toppled in the 2018 “Velvet Revolution,” led by current Prime Minister Nikol Pashinyan.

In this summer’s parliamentary elections a party backed by Sargsyan, “I Have Honor,” challenged Pashinyan and finished a distant third but managed to pass the threshold and make it into parliament.

Sargsyan has not been arrested and remains free on condition that he not leave the country, Marianna Ohanjanyan, spokeswoman for the Anti-Corruption Committee (a new state body intended to centralize law enforcement investigations into corruption cases), told Public Television on November 22.

The former president’s lawyers said the timing of the charge was suspicious.

“The irony is that after taking Silva’s testimony for three and a half years, today they decided that she had also given a bribe to Serzh Sargsyan,” the former president’s lawyer, Amram Makinyan, told reporters. “Serzh Sargsyan was interrogated as a witness in the same case two years ago. Since then, no new legal circumstances have arisen.”

The investigative body has already charged Kocharyan, his former employee Armen Grigoryan, and his business partner Samvel Mayrapetyan for bribery based on Hambardzumyan’s testimony. Mayrapetyan went to Germany, reportedly for medical treatment, and he has not yet returned. The authorities have formally declared him wanted.

Kocharyan is alleged to have taken a bribe of $3 million, Grigoryan of $1 million. The details of Sargsyan’s charges are as yet unknown.

The broad nature of Hambardzumyan’s accusations has given rise to skepticism and social media irony. “I’m here to say, in case anyone is wondering: Silva Hambardzumyan did not bribe me,” goes a representative social media joke.

These are not the first criminal charges Sargsyan is facing since leaving office.

In 2019 he was charged with “theft of state money,” allegedly steering a government fuel contract to a particular company that cost the state an additional 489 million drams in subsidies, or about $1 million. That case is still in the court of first instance.

In October, Sargsyan was named in another criminal investigation, connected to a report that alleged the official presidential airplane flew high-ranking officials to the expensive German resort of Baden-Baden more than a dozen times from 2008 to 2017, during his time in office. Sargsyan has not been charged in this case.

Sargsyan’s lawyers and allies argue that the news charges come suspiciously close to the outbreak of heavy fighting with Azerbaijan the week before and a generally deteriorating security situation.

“This is another fake, petty accusation, which once again highlights the behavior of the land-giving capitulant regime,” said Eduard Sharmazanov, the deputy chairman of the Republican Party of Armenia, which is headed by Sargsyan.