The authorities backed off on their initial claim that the death was a suicide after relatives protested. 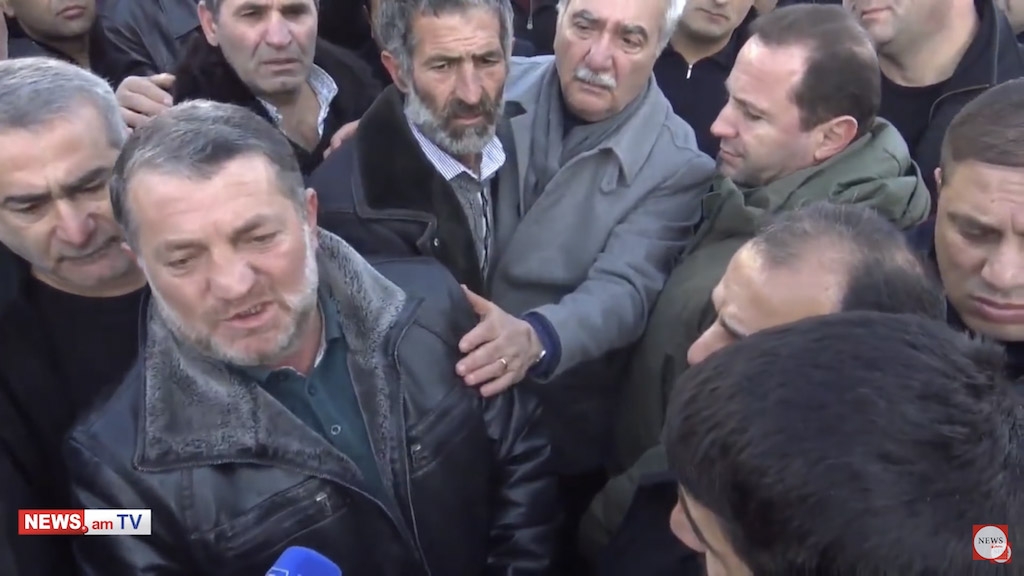 Screenshot of Armenian Defense Minister Davit Toniyan, upper right, in a crowd of protesters disputing the government's account of a soldier's death.

The relatives of an Armenian soldier who died under unexplained circumstances have clashed with police as they tried to draw public attention to what they believe is a murder. Three other soldiers in the dead man’s unit – including the son of a notorious oligarch and lawmaker from the former regime – have been arrested in the case.

On January 30, Armenia’s Investigative Committee reported that Vahram Avagyan, a conscript born in 2000, died from a self-inflicted gunshot wound to the chest with an automatic rifle.

Deaths of soldiers in the armed forces have long been controversial in Armenia; even when they are officially reported as suicides, many suspect foul play. On January 6, a contract soldier died under similar circumstances to those of Avgayan, the authorities reported. And on January 28, an Armenian soldier was shot and wounded in Nagorno-Karabakh under unexplained circumstances. (Many soldiers in the Armenian armed forces serve in Karabakh, a de facto Armenian protectorate.)

Avagyan’s family disputed the notion that he killed himself, saying that the official statement was issued too quickly after the death to have conducted a proper investigation, and that relatives had seen the soldier in early January and that he was doing well.

On February 2, some of Avagyan’s relatives started a protest against what they believed was a coverup, starting to walk his coffin along the road from the village of Haytagh, in the province of Armavir, to Yerevan. They chanted “stop calling the murder a suicide” and demanded that the authorities bring justice to those truly responsible for the death.

Special police units, known as “red berets,” were dispatched to break up the march, and Defense Minister Davit Tonoyan also visited the scene to try to calm the situation. Tonoyan acknowledged that the initial reports of a suicide may have been wrong.

Shortly after the protests began and before Tonoyan’s arrival, the authorities announced that three soldiers from Avagyan’s unit had been arrested in connection with his death. Tonoyan told the crowd that “there was a problem between them” and Avagyan.

At one point, Avagyan’s brother directly confronted Tonoyan. “Why don’t you trust me?” Tonoyan asked. “Your press announced to the world that he committed suicide one hour after the incident,” the brother responded.

“I don’t know what happened physically, but morally I’m responsible, commanders are responsible and they will be severely punished,” Tonoyan said. That didn’t mollify the crowd. “Say the killers' names out loud,” “the media called it a suicide,” “take that label off the kid,” they shouted.

Pouring salt on the wound was news that one of the arrested soldiers was the son of a well known oligarch and former Republican Party member of parliament under the former regime, Arakel Movsisyan.

“You know they are sons of oligarchs, get them a separate unit let them settle their grievances there,” Avagyan’s father told Tonoyan.

Movsisyan has a poor reputation in Armenia even by the standards of the former ruling party, known for his boorish behavior. Shortly after the 2018 transition to the new government now led by Prime Minister Nikol Pashinyan, the National Security Service searched his home and he was forced to hand in some weapons he was illegally keeping.

The day of the arrests, Movsisyan told the Armenian news website factor.am that his son is innocent.

“I am sure that my son is not involved in these kinds of things,” he said. “I extend my condolences to the parents of the soldier and personally will join them in uncovering the truth. It doesn't matter to me whether my son or this guy is killed. Let the investigation do its job.”

Movsisyan’s son’s lawyer, Gor Gevorgyan, told Sputnik Armenia that the suicide took place in view of other soldiers. “Besides the deceased soldier and Davit Movsisyan, there were many others including officers, soldiers, soldiers from other military units” who saw the incident,” Gevorgyan said.