The chair of the constitutional court has become a primary target of the new authorities, and is now facing two separate criminal cases. 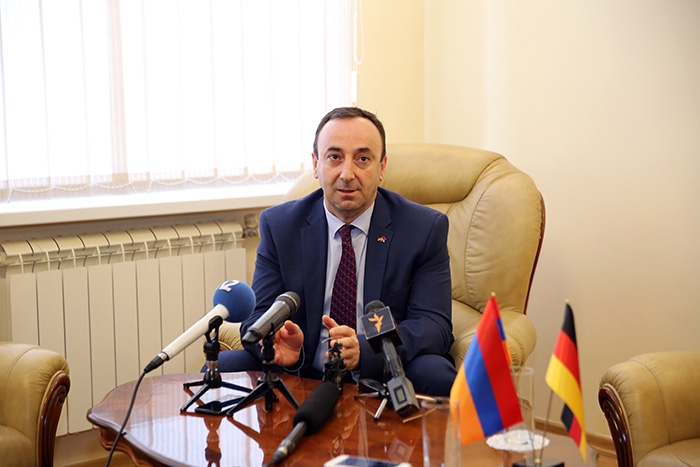 The Armenian government’s campaign against a senior judge connected to the former regime is accelerating, with two criminal cases opened against him and one of his former associates arrested. The moves have further heightened the rift in Armenia between those who believe the new government needs to remake the judiciary at any cost, and those who believe the new government is effectively repoliticizing the court.

At the center of the battle is Hrair Tovmasyan, the chairman of the constitutional court. Tovmasyan is the last remaining senior member of the formerly ruling Republican Party of Armenia to hold power in the country; he was a former member of parliament and played a key role in rewriting the constitution that allowed Serzh Sargsyan to stay in office indefinitely by sliding from the president’s chair to that of the prime minister. That effort ultimately backfired, leading to mass protests that brought the current authorities to power.

Along with the political effort to oust him, Armenia’s law enforcement agencies have been pursuing legal cases against him. On October 17, the Special Investigative Service (SIS) launched a case investigating “usurpation of power” related to Tovmasyan’s appointment to the court in March 2018.

The SIS said it was responding to a criminal report filed by Arman Babajanyan, an independent member of parliament formerly of the opposition Bright Armenia faction. Babajanyan alleged that Tovmasyan worked together with the Republican Party to ensure that he would take the judicial position just ahead of the new constitution coming into effect; the new constitution instituted stricter term limits for judges.

Arsen Babayan, a former parliamentary staff member, was arrested on October 21, accused of aiding Tovmasyan in that scheme.

The second investigation against Tovmasyan was launched by the National Security Service (NSS) into the judge’s personal wealth. The case has to do with renovations done on state properties carried out between 2012 and 2014, when he was justice minister, and allegations that state funds were stolen.

In the course of that investigation Tovmasyan’s daughters were called in to the NSS for questioning and his father was visited by officers who wanted to ask about how his roof was repaired.

A small group of Republican Party officials and loyalists protested in front of the NSS building while Tovmasyan’s daughters were being questioned on October 18. "It's a bogus political order,” the party’s deputy president, Eduard Sharmazanov, told reporters.

Those claims were met with mockery by MPs of the new ruling party.

“It turns out that the relatives of the officials also have immunity, that is, they cannot be invited for questioning, law enforcement officials should not approach them,” Vahagn Hovakimyan told RFE/RL.

“One day I will probably tell you what my family, father, mother, and wife went through as a result of my work in 2010-2018,” said Aren Mkrtchyan, another My Step MP and former activist, in a Facebook post. “Small- and medium-sized remnants of Serzh, let's remember who you were, with all the details. Just sit and don’t make a sound.”

The campaign to dethrone Tovmasyan began in July when the government appointed to the constitutional court Vahe Grigoryan, an ally of the government and former prominent advocate in the fight for justice for protesters killed in 2008, in what became known as the “March 1” events.

During Grigoryan’s confirmation in parliament he indicated that he did not accept Tovmasyan’s authority and attempted to displace him using a technicality based on a small difference in wordings in the old and new constitutions.

The Venice Commission, a Council of Europe body advising members on legal issues, openly criticized Grigoryan’s bid and the parliament’s apparent support of it.

“It was disturbing that this statement by the judge has been applauded in parliament and there might be a risk of interference with the mandates of the sitting judges,” the commission said in a statement.

The issue of overthrowing Tovmasyan took a backseat for a few months but then seemed to be reactivated by a September 4 court ruling in favor of former president Robert Kocharyan, who is facing trial related to the March 1 events.

Edmon Marukyan, the leader of the opposition Bright Armenia faction in parliament, criticized the campaign against Tovmasyan, arguing that it was a sideshow distracting from reforms that the country should be implementing. He further suggested that it appeared to be aimed at letting Grigoryan replace Tovmasyan.

“For handling Tovmasyan’s case this way, Armenia will have to answer to the international community in Strasburg and so on,” he said on October 21, referring to the home of the European Court of Human Rights. “The chain of events related to this case as a whole will be seen as unlawful investigations against Tovmasyan and will be a weapon in the hands of other side,” the former government. Marukyan continued. “The involvement of NSS is unnecessary attention drawn on this case.”