Until recently, oligarch Gagik Tsarukyan had managed to stay in the government’s good graces. But then he started criticizing them more sharply, and now the authorities have unveiled several criminal cases against him. 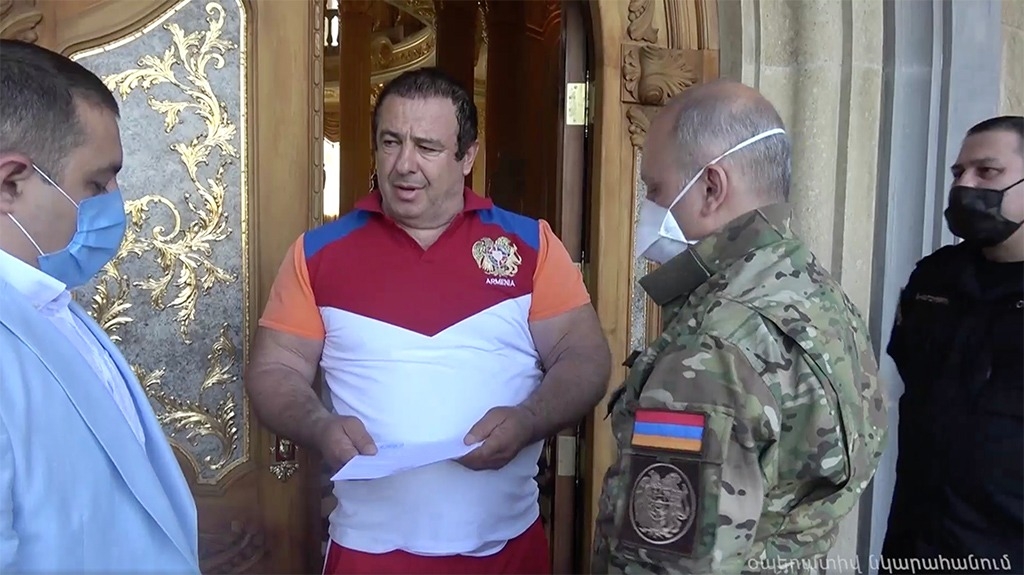 The Armenian security services have searched the home of a leading opposition politician and detained hundreds of his supporters in an escalating battle with the man who until recently had been Armenia’s most conspicuously untouched oligarch.

The morning of June 14, officers from the National Security Service (NSS) searched the home of Gagik Tsarukyan, the head of the Prosperous Armenia party, the largest opposition group in parliament. Several other party members’ homes also were searched, and over 250 party supporters were detained, some of them forcefully, after they gathered in front the NSS headquarters to show their support. (The current coronavirus state of emergency bans protests.)

Later, the NSS issued three separate statements announcing criminal cases initiated against Tsarukyan, including evading more than $60 million in taxes in his casino businesses, including the massive Shangri La casino outside Yerevan. He also is accused of bribing voters in the 2017 parliamentary elections and of illegally taking over state land.

The NSS also released a video on June 15 showing the search, including several of Tsarukyan’s luxury cars and his lions in a private zoo.

The legal actions came after more than a week of sharp conflict between Tsarukyan and the ruling My Step coalition, in particular Prime Minister Nikol Pashinyan.

Even after Pashinyan came to power in the spring of 2018 on a promise to root out the country’s long-entrenched oligarchs, he reached a sort of accommodation with Tsarukyan, one of the country’s richest men and also one of its most politically influential. Tsarukyan played a key role in organizing early parliamentary elections later that year, against the wishes of the then-majority Republican Party of Armenia, that ultimately brought My Step to power.

As many of the country’s business figures connected with the old regime were prosecuted and investigated, Tsarukyan remained untouched. Until very recently Tsarukyan had even managed to grow his businesses and secure for them privileges from the state.

And while Prosperous Armenia reliably opposed many of My Step’s initiatives in parliament, Tsarukyan remained more or less on good terms with Pashinyan and the government.

But recently Tsarukyan had become a sharper critic. Following the country’s disastrous response to the coronavirus outbreak, which led to Armenia being the regional leader in per capita infections, Tsarukyan on June 5 called on the government to resign due to its “ineffective efforts” against COVID-19 and Armenia’s “failing economy.”

“One hundred percent of the government has to be changed,” he said at a party meeting, calling on other opposition forces to unite against the government.

Later that day, Pashinyan’s spokesperson Mane Gevorgyan responded by revealing what had until then been undisclosed ongoing criminal investigations against Tsarukyan.

“I think Mr. Tsarukyan is just concerned about a number of criminal cases involving money laundering, tax evasion, and corruption. If Mr. Tsarukyan thinks that his political statements will differ the normal process of the investigation, he has made a mistake,” she wrote.

Three days later, the newspaper Armenian Times – previously owned by Pashinyan and still edited by his wife – published leaked documents regarding a rape charge against Tsarukyan from 1979, for which he was later exonerated.

Following the search of his home, Tsarukyan said that the prosecution of him was politically motivated.

“Today’s situation is an escalation, it’s political, they want to put pressure and blackmail me, but I say as Gagik Tsarukyan, I’ll be a son of a whore if I back off,” said Tsarukyan. He was later taken to the NSS headquarters and interrogated for nine hours.

As a member of parliament, Tsarukyan has immunity against prosecution, but his allies have warned that the government will try to work around that. “A political decision has been made for General Prosecutor Artur Davtyan to bring to the National Assembly on Tuesday [June 16] a petition to strip Tsarukyan of his parliamentary immunity and indict him,” wrote Prosperous Armenia MP Naira Zohrabyan in a Facebook post.

In the evening of June 15, speaker of parliament Ararat Mirzoyan announced that the following day parliament would in fact discuss proposals to prosecute and arrest Tsarukyan.

Analysts supported the notion that that the investigations against Tsarukyan are politically motivated.

“It was clear that the developing contradictions [between Tsarukyan and the government] would at some point take on a sharp form,” said Boris Navasardyan, the head of Yerevan Press Club, in an interview with news website Caucasian Knot.

“If Tsarukyan was a hidden opponent before, now he is challenging them openly,” Navasardyan said. “Taking into account that Tsarukyan leads the only [opposition] political force that has real support among the public, this factor plays a serious role in the consolidation of the opposition. Without him, the consolidation of the opposition doesn’t represent a threat to the government. And so his neutralization became politically necessary, all the more so considering the falling ratings of the government.”

Armen Vardanyan, an analyst at the Yerevan think tank Armenian Institute of International Affairs and Security, also argued that the charges are political.

"Tsarukyan doesn’t have an ideal past. He was involved, in particular, in corruption and falsification of elections. But when criminal cases are opened after his call for the government to resign, this suggests a political motive," he told Caucasian Knot.