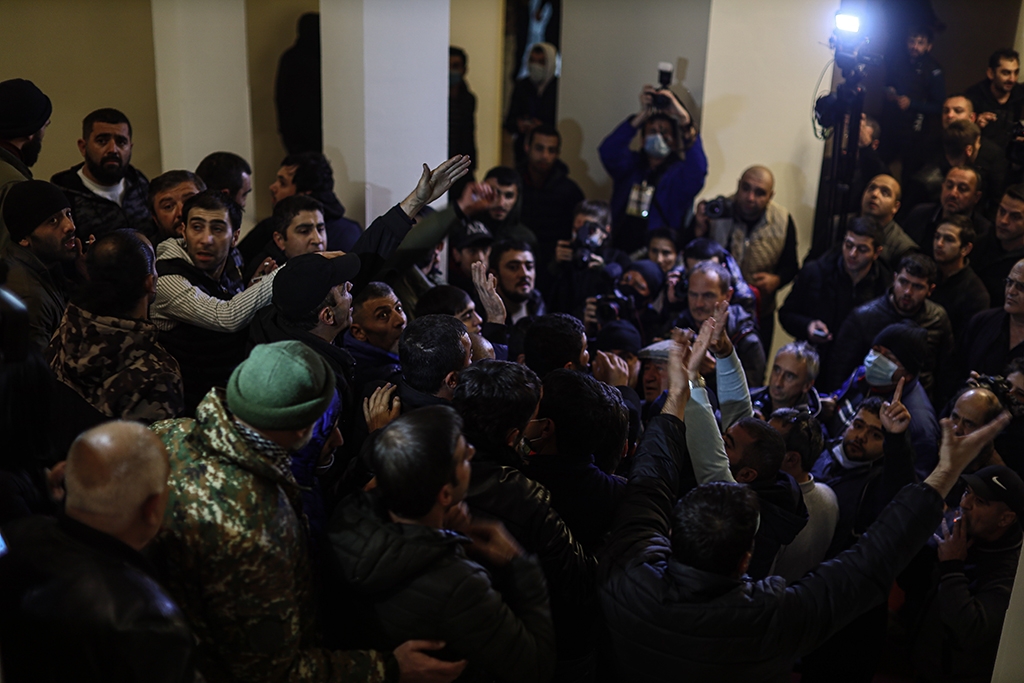 The government of Armenian Prime Minister Nikol Pashinyan faced an immediate and fierce backlash after he signed an agreement surrendering large swaths of territory to Azerbaijan.

Pashinyan announced the capitulation on Facebook shortly after midnight local time on November 10. The terms were “unspeakably painful for me personally and for our people,” he said. They were necessitated by Armenia’s defeat in the month-and-a-half war with Azerbaijan, culminating in the loss days before of Shusha/i, one of the key cities of Nagorno-Karabakh.

The shock of the defeat sent tremors throughout Armenia’s government, as Pashinyan’s longtime foes appeared to be trying to take advantage of the moment to weaken him, while the prime minister himself fought to stay in power.

Shortly after the agreement was announced, hundreds of angry Armenians marched to Baghramyan Avenue, the site of many state buildings and the seat of parliament. One group, led by a veterans of a special forces unit from the first war in Karabakh in the 1990s, broke into the parliament, loudly chanting and throwing bottles.

Members of the opposition Prosperous Armenia and Bright Armenia parties were in the chamber in an attempt to organize an emergency session, but they failed without representatives from the ruling My Step coalition, who were absent. Naira Zohrabyan, a Prosperous Armenia MP, said that they were discussing whether parliament had the authority to annul the peace agreement that Pashinyan had signed.

On the street nearby, some of the protesters managed to find Ararat Mirzoyan, the speaker of parliament and a close Pashinyan ally. They dragged him out of his car while his child was in it and beat him badly. He underwent surgery but was expected to live. "Fortunately, there is no danger to his life," a Pashinyan spokesman wrote on Facebook. Two suspects later were arrested in the beating.

The whereabouts of Pashinyan himself were unknown. A group of unknown people broke into the government residence where he lives with his family but they didn’t find him; they posted a video of their search online and stole some items. The prime minister posted on Facebook at about 9 a.m. local time: “I am in fact in Armenia and I continue to carry out my duties as a prime minister.”

In the morning, hundreds gathered at the parliament building to express their anger at the agreement. They demanded an explanation from Pashinyan and that members of parliament announce whether they support the deal.

The participants interviewed by Eurasianet said they had previously supported Pashinyan and his “Velvet Revolution” of 2018, when he came to power on a wave of street protests against the corrupt, autocratic former regime.

But signing the agreement was a betrayal of the revolution, many said.

“This is holy land, there are generations who spilled their blood on that land,” said Tigran Khachaturyan, a 30-something participant. “And the single person who had the most trust of the people…” Khachaturyan trailed off. “You can imagine the frustration of the nation now. That the person who had the most trust just screwed us in one night, with one signature, with the enemies of Armenia.”

Khachaturyan recalled that at the rallies during the revolution, Pashinyan promised that any deal on Karabakh would be based on public consensus. “One of his most important revolutionary statements was that ‘we will make the decision on the Karabakh problem on this square, together.’ He promised it: ‘We won’t make an agreement behind closed doors.’”

He acknowledged that Pashinyan may have had no choice, but objected to the way he did it. “OK, there was no choice – then do it according to your promise,” he said. “Come to the square and tell it to the people.”

Others said that the deal itself was unacceptable. Many accused Pashinyan of “selling out” to Russia. Moscow brokered the agreement, which includes a contingent of Russian peacekeepers for at least five years, cementing Russia’s status as the dominant power in Armenia.

“We wanted change, but not this. Not one of the others [from the previous regime] signed anything like this. They were always able to maneuver out of it,” said Emma Begiyan, a 50-something protester.

“His words and his deeds are different,” she continued. “They were telling us every day that everything was going great [in the war] and now in one night we’re selling our land.”

While the war was underway, opposition figures took a relatively low profile, with many advocating for national unity and saying now was not the time for political strife.

But they no longer feel such restraint, and several political figures appeared to be maneuvering against Pashinyan and his government.

The evening before the agreement was announced, a group of 17 political parties – including Prosperous Armenia, the former ruling Republican Party of Armenia, and the venerable nationalist part Armenian Revolutionary Federation Dashnaktsutyun – called on Pashinyan to resign because of his mismanagement of the war.

Several members of the opposition, including Prosperous Armenia leader Gagik Tsarukyan and Artur Vanetsyan, the former head of the National Security Service who later became a Pashinyan opponent, met early in the morning with military officials including the chief of staff of the armed forces, Onnik Gasparyan. Gasparyan also separately met with Republican Party officials.

Following the meeting, the opposition figures issued a statement saying that they were “presenting solutions to resolve the situation.”

Even President Armen Sarkissian issued an extraordinary statement distancing himself from the peace agreement, saying that he only learned about the deal from the media and that it should have been the subject of more negotiations. “Unfortunately, there had not been any consultation or discussion on this document with me as the president of the republic. I had not taken part in any negotiations,” he said.

Pashinyan hit back against the political attacks in one of the several Facebook live videos he issued throughout the day.

“I call on all citizens who understand what is happening to take revenge” on members of the former regime, he said. He called Prosperous Armenia and the Republicans “robbers” and Vanetsyan “a deserter who should be in jail.”

In another Facebook video, Pashinyan said he was weighing holding a rally. The 17 opposition parties said they were planning to hold a Yerevan rally on November 11.