Armenian kids head back to school despite smoldering COVID-19 outbreak

Armenia is taking a faster route to in-person classes than its Caucasus neighbors, but it is adopting a number of precautions to make sure that schools don’t spread the virus. 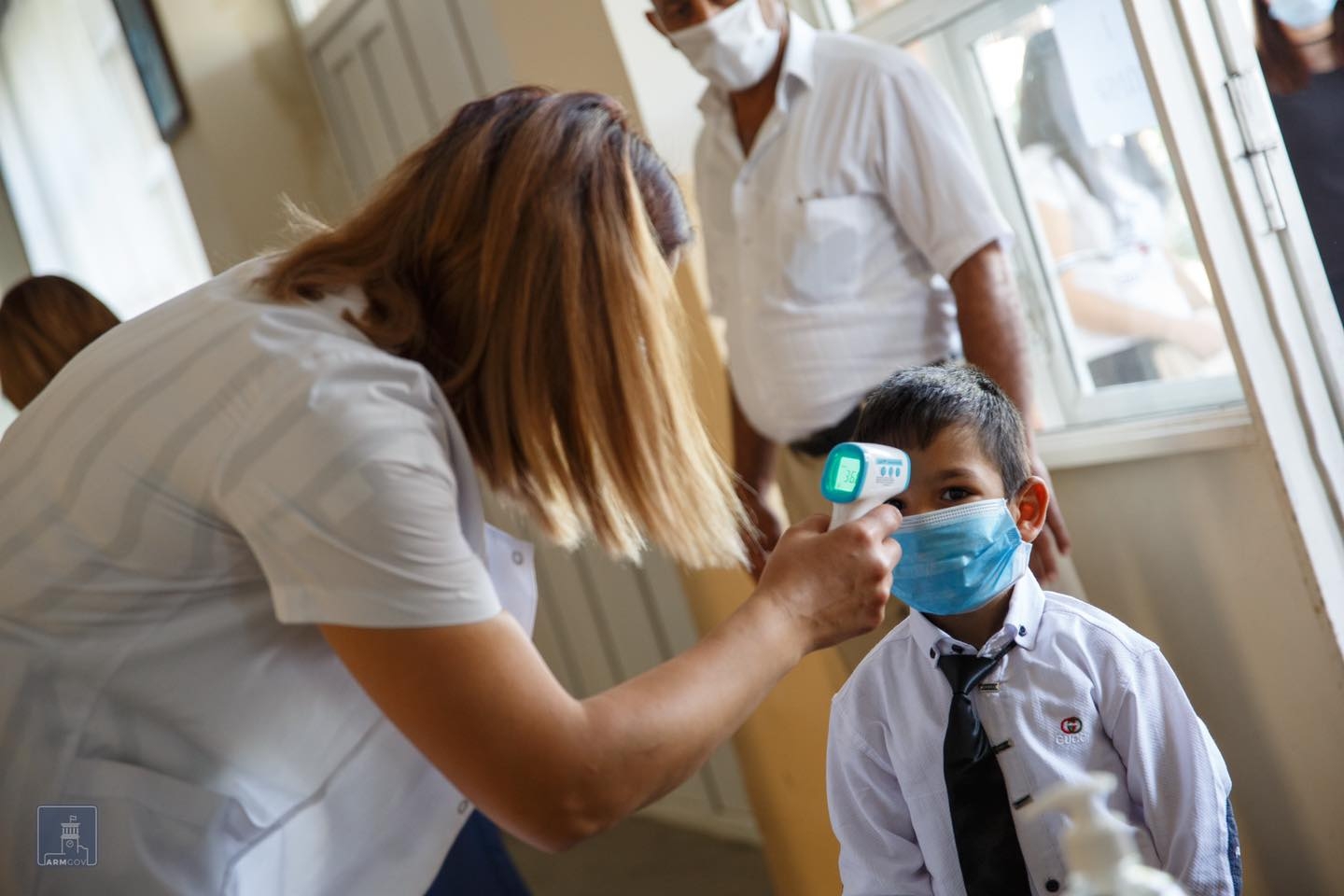 Armenian students return back to school with new epidemiological rules in place. (photo: Facebook, Government of the Republic of Armenia, Areg Balayan)

Armenian kids have headed back to school after six months away, while their country became one of the world’s biggest COVID-19 hot spots.

First-graders started in-person classes on September 14, while everyone else started September 15. Armenia is still wrestling with the coronavirus, with 2,975 active cases, and schools have taken precautions to make sure that the return to school doesn’t start a new outbreak.

All students now get temperature checks before entering the building, and hand sanitizer dispensers are attached to the walls. The two-person school desks – traditionally the source of either close friendships or bitter resentments – now have only single students sitting at them.

The “Day of Knowledge” – as the back-to-school day is known across the former Soviet Union – had a forlorn look this year. Not only was it two weeks later than the traditional September 1, but there were no ceremonies, students wore masks nearly as big as their heads and teachers struggled to make sure the youngsters maintained appropriate social distance.

Kids appeared to understand the importance of the new rules.

“There is a coronavirus and I don’t want to infect my grandma and grandpa,” one first grader told the local service of RFE/RL in a report from Yerevan school N53.

Teachers are taking on more responsibility as a result of the coronavirus, said one of N53’s administrators, Seda Karakhanyan. “We won’t be just teachers but also doctors and parents to the kids,” she said. “Because all the responsibility for their health is on us.”

The Ministry of Education has offered teachers older than 65, who face an especially high risk from COVID-19, not to work while continuing to receive their salaries. But none of the teachers at N53 took the offer.

He also emphasized the need to maintain the coronavirus protocols. “You already bear a big responsibility, you are walking inside [the schools] with masks, we all understand how inconvenient it is … But you are being responsible for your grandparents and other’s grandparents,” he said.

Despite having the heaviest coronavirus outbreak in the region – for a time it was one of the world leaders in per capita infections – Armenia also has taken the speediest route to restarting schools.

In Azerbaijan, schools also started on September 15, but only for classes 1-4 and only two to three days per week. (Armenian students will go six days a week, but for shorter periods than normal.) Azerbaijani fifth- through ninth-graders will return to school on October 1 but have been doing online classes since September 1. High schoolers will start October 15.

In Georgia, schools also were supposed to restart on September 15, but a new wave of infections – the country has set new records in several recent days – scuttled those plans at the last minute, and now in-person learning has been postponed to October 1.

The government announced the return to in-person learning on August 10, with a Facebook video by Education Minister Arayik Harutyunyan explaining the new sanitary conditions schools would have to observe: Classes would be no larger than 20 students, desks would be a minimum of 1.5 meters apart, and classrooms would have to be no less than 54 square meters for a group of 20 students. School buildings should be ventilated three times a day for 10 minutes, and kids eat at their desks rather than in the cafeteria.

Following that announcement, some suggested that it may be too hasty a decision.

“We should launch a pilot project with several schools in the capital and in some villages, collect and analyze data in order to understand how dangerous it is for the health of teachers and students, and how it affects the spread of the virus,” said David Melik-Nubaryan, a public health expert at Yerevan State University, told RFE/RL.

Others, though, focused on the harm to students’ long-term education caused by prolonging online learning. “Distance learning damages the quality of education,” education expert Serob Khachatryan told Armenian new website ankakh.com. “I don’t think we have yet manage to implement distance or hybrid learning at a professional level.”