Remittances from migrants in Russia amount to about 5 percent of Armenia’s GDP. Sanctions are putting that at risk. 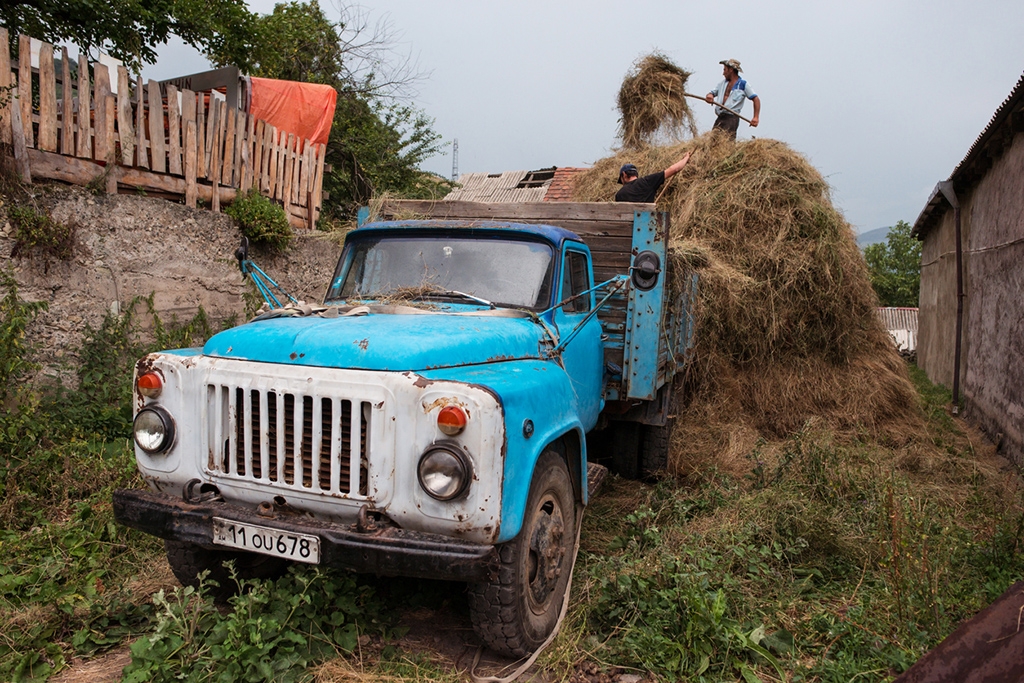 Work is hard to find at home. (iStock)

Marine Khachatryan and her husband moved to Russia after the war with Azerbaijan in 2020. Despairing of her economic options in her home country, she found work at a flower shop in Moscow’s outskirts, while her husband got work in construction.

But then came another war: the invasion of Ukraine, which has resulted in punishing sanctions and a crisis in Russia’s economy.

“We came here to make money and up until the war, we were fine. Now, nobody wants to buy flowers and the owner [of the shop] keeps losing money,” Khachatryan told Eurasianet from Russia. “I thought about trying to get another job, but Russia is getting more expensive.” So instead she has decided to move back to Armenia. “It’s a nightmare. I can go back to working in beauty salons, but I don’t know what my husband will do.”

Every year, tens of thousands of Armenians – especially men from smaller towns and villages – travel to Russia for seasonal labor, particularly in construction. Estimates vary widely. Armenia itself reports that about 80,000 go to Russia for seasonal work every year. But Russian data puts the figure at 300,000, which would be more than 10 percent of Armenia’s population.

Unknown numbers of other recent migrants from Armenia live in Russia more permanently, some even gaining Russian citizenship, but still send money back to family in Armenia, a critical part of the country’s economy.

In 2021, remittances from Russia amounted to $865 million, according to Armenia’s central bank. That was equivalent to nearly 5 percent of the country’s GDP.

That figure is now set to drop dramatically. “It could be up to a 40 percent decrease,” Finance Minister Tigran Khachatryan told the Armenian state news agency on March 28.

Armenian labor migrants say that many jobs in Russia are disappearing, and in the ones that remain, the salaries – once converted to Armenian drams – are unpredictable. In the early days of Russia’s invasion and the sanctions that were swiftly imposed in retaliation, the ruble lost half its value, though it has since recovered.

“Salaries have shrunk, and it’s possible that employers are not going to be able to pay at all,” said Tatevik Bezhanyan, an expert on migration at the charity group Armenian Caritas. “For now they can still pay, but if the situation doesn’t get better there definitely are going to be issues,” she told Eurasianet.

Remittances “are likely to decline with weaker economic activity in Russia, the depreciating ruble, and restrictions on financial flows from Russia,” the World Bank said in a report last month. “Under a more severe contraction in Russia, many migrants may be forced to return to Armenia putting pressure on labor markets and fiscal spending.”

Before Russia’s invasion of Ukraine, the World Bank had projected Armenian GDP growth of 5.3 percent in 2022. Now it’s revised that down to 1.2 percent.

Russia has not released figures so far this year measuring migrant flows and how they might have changed. Usually the Ministry of Internal Affairs publishes data by April, but this year the release is late, Bezhanyan said. “My Russian colleagues say that there is just a big outflow out of Russia and so maybe they are being cautious about this,” she said.

Seasonal migrant laborers typically start arriving in Russia in March, when the weather begins to allow construction work. So it is still early to judge the impact of the new situation on labor migration, but Bezhanyan said that initial indications are not good.

“We have already received notices that employers are having difficulties paying,” she said. One practice employers have been trying, in order to save money, is to ask workers to work off the books. “But we always advise not to agree to that, since it can result in getting deported. And if there is no contract specifying the amount of the salary, they can forget about getting paid. We have already been seeing problems like this.”

Arsen, a construction worker (who asked that his last name not be used), has been working in Russia’s Urals region since February.

“When the ruble collapsed we talked to our foreman, since we would be making half of what we were getting before,” he said. “After two weeks, they told us that we could get higher pay if we terminated our contracts and worked off the books. We did it, and now we haven’t been paid in two months.”

Because of international financial sanctions against Russia, transferring money back home also is more difficult, with the Russian Zolotaya Korona service now the only option for sending money to Armenia and new restrictions on the amounts that can leave Russia.

As a result, many regular migrants are staying home this year. “Some found jobs here and are not complaining about the pay, given the costs in Russia. They can live in their houses in Armenia and see no reason to go to Russia,” Bezhanyan said.

So far, the Armenian government has only come up with an indirect way to address the issue. Prime Minister Nikol Pashinyan has introduced a proposal to boost the construction sector by offering subsidized loans for home renovations that include improving energy efficiency.

“Due to well-known circumstances, uncertainties have arisen regarding our citizens going abroad for work,” he said at аn April 15 cabinet meeting. “We have decided to launch a state program, within the framework of which we offer citizens to take subsidized loans to rebuild their apartments. […] We hope that with this we will make a significant contribution to housing, the economy, small business, and poverty alleviation.”

Bezhanyan is skeptical. “This is definitely an indirect approach,” she said. “It’s clear that these people see the danger [in staying in Russia] and they are creating a foundation for themselves to be able to move to Armenia, but we need to take steps so they don't come back to Armenia and then leave for another country. There has to be a more systematic approach.”