Armenian leader lashes out at church

In an unusually public airing of grievances, the prime minister and the catholicos have traded barbs over politics and corruption. 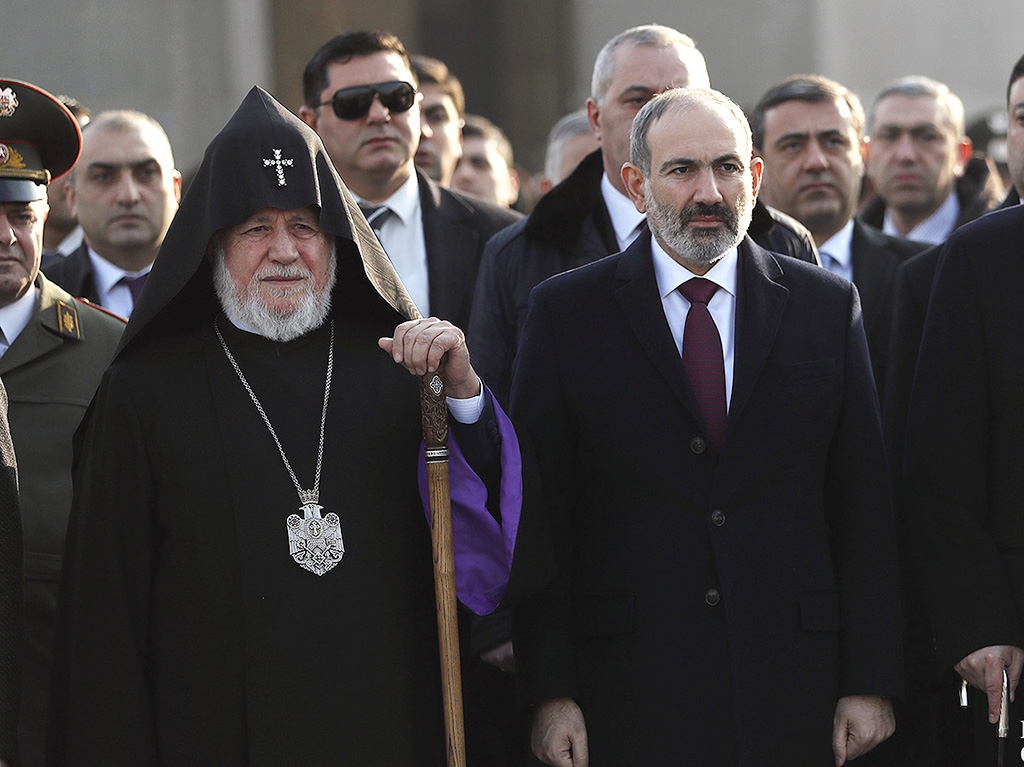 Karekin II and Pashinyan together on Army Day in January (primeminister.am)

The head of Armenia’s church has made an unprecedented foray into politics, earning a disdainful attack from the prime minister. Meanwhile, in a development whose timing has not gone unnoticed by the chattering classes, Armenia’s intelligence agency suddenly reopened a years-old investigation into a senior church leader.

The conflict first came to the public’s attention when Catholicos Karekin II, in an April 14 interview, said that ex-President Robert Kocharyan should be released during the COVID-19 pandemic to protect him from the virus.

Kocharyan has been in prison for almost two years awaiting trial for his government’s violent response to protests in 2008, known popularly as the “March 1 events.” During those events, the current prime minister, Nikol Pashinyan, was arrested and spent almost two years behind bars.

Within hours of the church leader’s comment, Pashinyan’s spokeswoman responded by tying a church official to a case, in the Armenian press, has been reported to be part of the March 1 investigation.. She reminded reporters that Father Vahram Melikyan, a spokesperson at the Mother See of Holy Etchmiadzin, the headquarters of the Armenian Apostolic Church, last year had offered his personal guarantee that a businessman who had been detained for abetting corruption that was widely believed to be connected to the March 1 case would return to stand trial after seeking medical treatment abroad.

The next day, April 15, the standoff escalated further when the National Security Service, the successor agency to the Soviet-era KGB, brought fraud and money laundering charges against Archbishop Navasard Kchoyan relating to a loan for an African diamond mine back in 2012.

Kchoyan denies the allegations and a church spokesman described the order of recent events as "bewildering.”

On April 20, opposition parliamentarian Naira Zohrabyan appeared to call for a truce, telling journalists that Karekin could only have been addressing the courts, not the Pashinyan government, because only a court could free someone from prison. “As for the dirty, low-level campaign that has started against the Armenian Apostolic Church, I consider it simply disruptive,” she added.

Yet later that day Pashinyan escalated the standoff further. In a Facebook live chat, Pashinyan claimed that his government has caused "grave disappointment" to the clergy because his policies have revealed a "lack of spiritual life in Armenia."

A church spokesman on April 21 said the Holy See disagreed, but that it would not comment further for now, as the country prepares to mark the 105th anniversary of the start of the Armenian genocide.